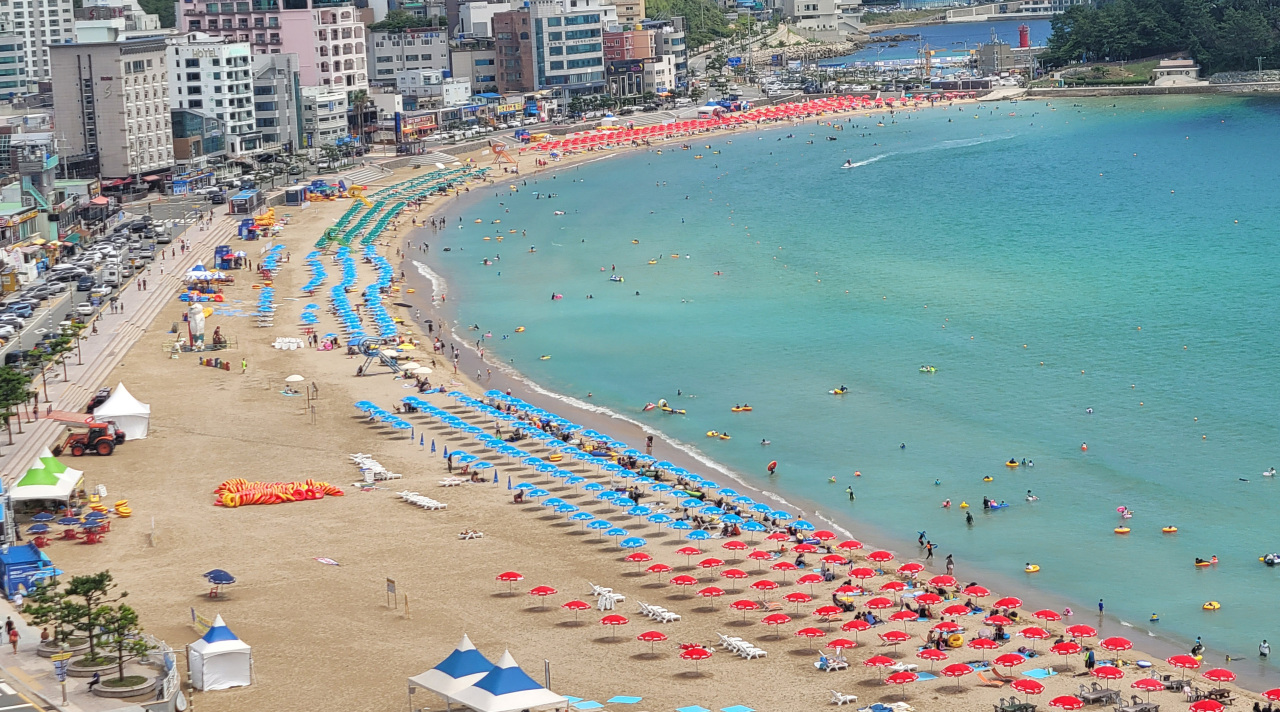 This photo taken Saturday, shows Songjeong Beach in Haeundae, Busan, with a small number of people enjoying summer holidays amid a surge in COVID-19 cases. (Yonhap)
South Korea's daily new coronavirus cases retreated to the 1,400s on Sunday due to fewer tests over the weekend, but the fourth wave of infections showed no signs of slowing down despite the adoption of the toughest virus curbs in the greater Seoul area.

The country added 1,442 COVID-19 cases, including 1,386 local infections, raising the total caseload to 199,787, according to the Korea Disease Control and Prevention Agency (KDCA).

The latest tally is down from 1,710 cases reported Friday and 1,539 cases Saturday.

The daily caseload has remained above 1,000 since July 7 due to the resurgence in the greater Seoul area. Recently, cases elsewhere have been growing amid increased activities in the summer vacation season.

Health authorities are considering additional measures to contain the fourth wave of the pandemic as new cases continued to spring up across the country despite strict virus curbs.

Prime Minister Kim Boo-kyum said during an anti-virus meeting that the spread of the more transmissible delta variant is an obstacle to quarantine efforts and the government cannot help but consider stronger measures unless the spread is curbed.

"We have back-to-back Liberation Day holidays coming up in two weeks. If we fail to stop it here, we will end up facing a greater crisis," Kim said, adding that the spread could hamper the government's vaccination campaign.

The KDCA has extended the highest social distancing measures of Level 4 in the Seoul metropolitan area until next Sunday.

The toughest restrictions ban gatherings of more than two people after 6 p.m., place a 10 p.m. curfew on restaurants and cafes, and order nightclubs and other entertainment venues to not operate.

Areas outside the greater capital region are under Level 3 measures through next Sunday, though some municipalities have adopted Level 4 measures to better contain the virus.

Under Level 3, cafes and restaurants can accept customers until 10 p.m., and only takeout and delivery services are available after that time. Private gatherings of five or more people are banned.

The KDCA is also working to boost its vaccination drive by expanding inoculations to the younger population.

The health agency said vaccinations for 17.77 million people aged 18-49 will take place from Aug. 26 to Sept. 30 with mRNA vaccines from Pfizer and Moderna.

A total of 19.23 million people, or 37.9 percent of the country's 51.3 million population, have received their first shots of COVID-19 vaccines, and 7.13 million people have been fully vaccinated, the KDCA said.

Of the 1,386 domestic cases, infections from non-capital areas reached 437, or 32 percent of the total, after rising to the 30 percent mark in mid-July.

South Gyeongsang Province and the central city of Daejeon reported 81 and 67 cases, respectively.

In the capital area, Seoul reported 469, while the surrounding Gyeonggi Province added 393. The western port city of Incheon confirmed 87 cases.

New cases from overseas arrivals reached 56, down 17 from the previous day, bringing the total to 11,952.

Of the newly added imported cases, which also include South Korean nationals, 35 came from Asian countries except for China, followed by Europe with 13, the United States with three, Mexico with two, Africa with two and Panama with one.

The total number of people released from quarantine after making full recoveries was 175,674, up 1,497 from a day earlier.

The number of patients in critical condition came to 324, a rise of seven from the previous day. (Yonhap)