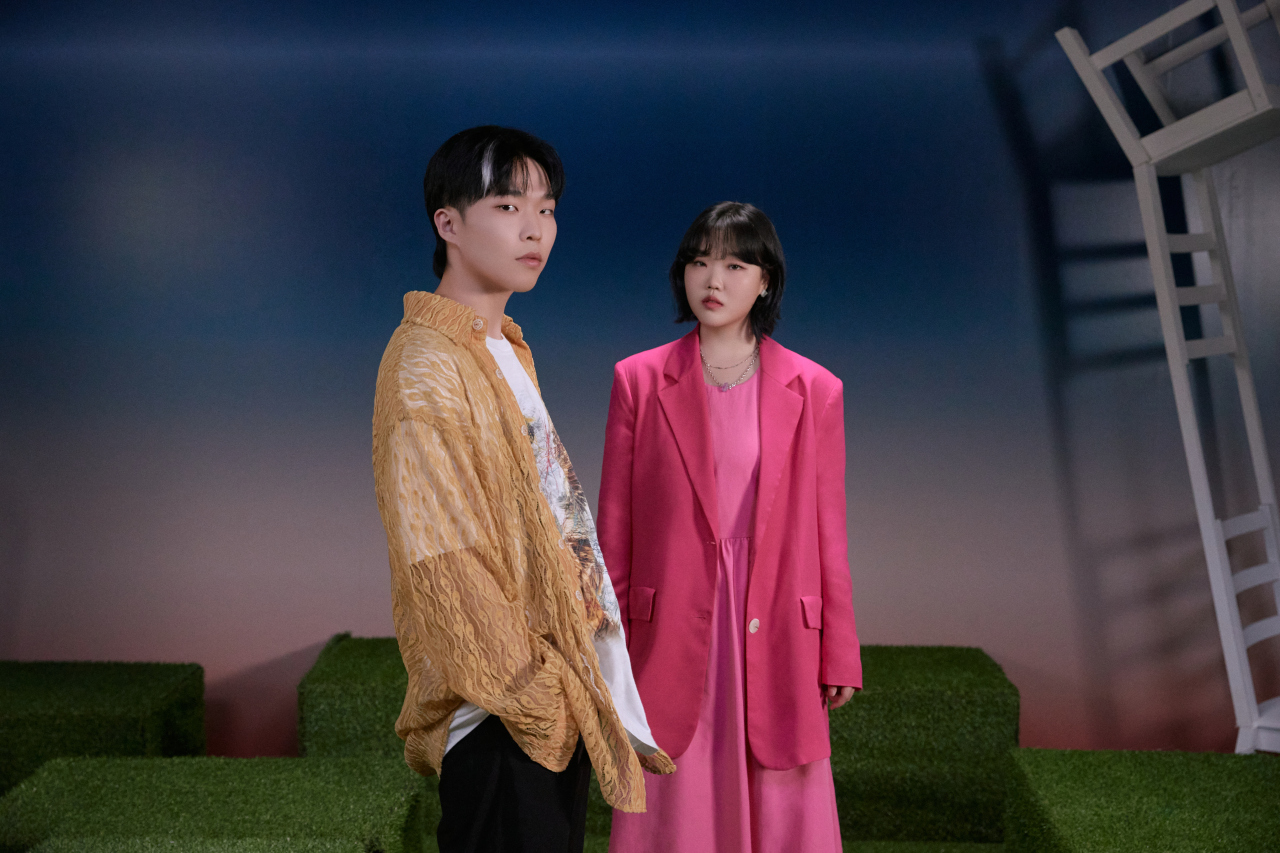 (YG Entertainment)
Sibling duo AKMU is ready to take the music scene by storm. The duet is opening a new chapter in their music career with new collaboration album “Next Episode,” releasing Monday evening.

The seven-song package provides support and comfort to people when they hit rock bottom in their lives, brother and songwriter Lee Chan-hyuk and sister Lee Su-Hyun said during an online press conference.

Fronted by lead track “Fall,” featuring singer and actress IU, the latest print for the group is a collaboration album brimming with the voices of A-listers, including veteran singer Lee Sun-hee, rapper Beenzino, Crush, Sam Kim, Zion.T and Choi Jung-hoon of indie rock band Jannabi, and is the first of its kind. 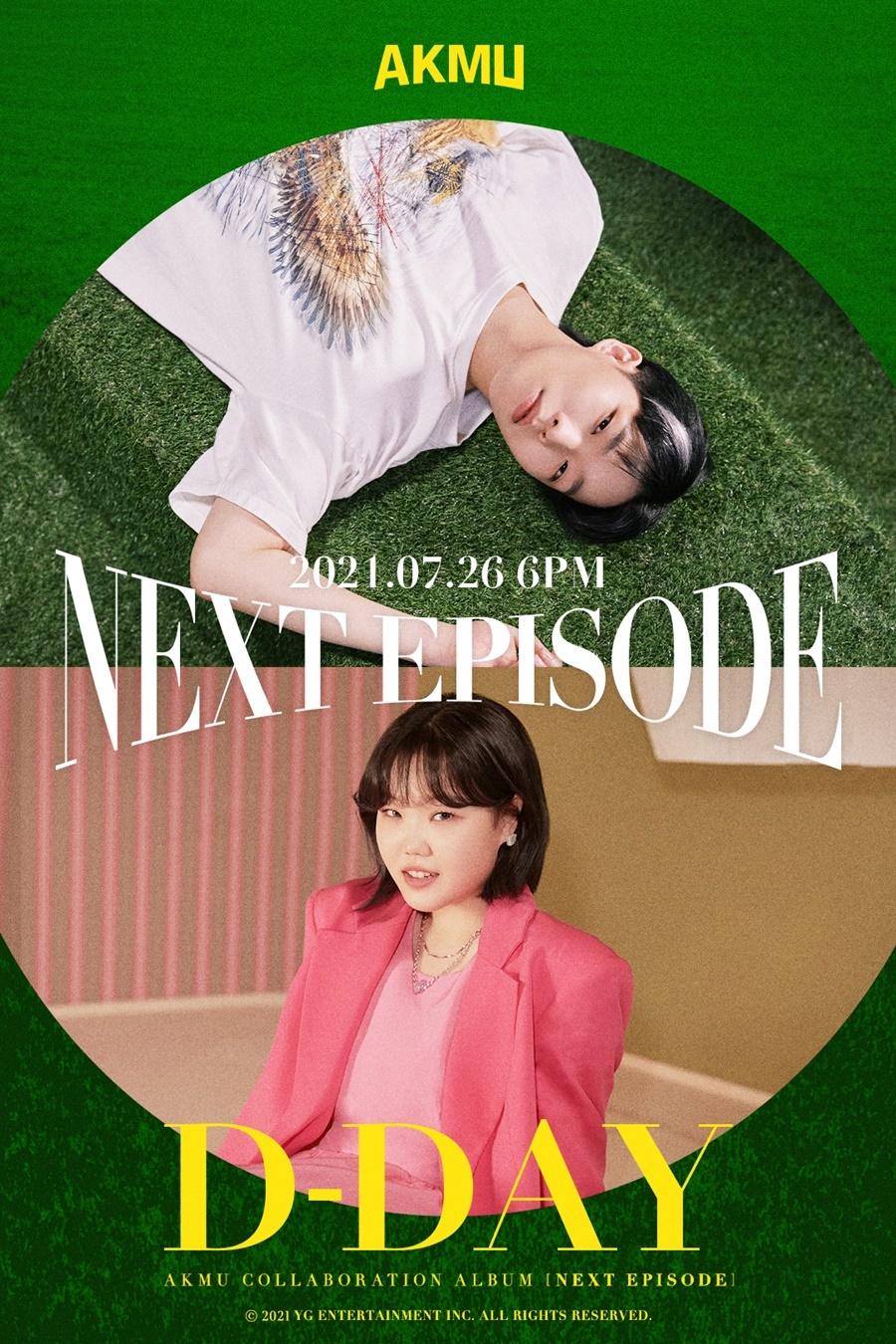 (YG Entertainment)
It took years for the duo to team up with IU, making a dream come true for fans who had yearned for such a collaboration between the two.

Su-hyun said she came together with the singer-songwriter because AKMU was looking for an artist who could “efficiently deliver the message of ‘Fall’ to the public” and that IU was a perfect match to the song. “She is popular and able to persuade anyone,” Su-hyun said, adding their work with IU became the start of the whole collaboration album.

The sister-brother tandem said their main song was inspired by the movie “The Greatest Showman.”

Chan-hyuk added that the word “fall” could be interpreted as a dark term, but he aims to send out positivity.

“The song sends a positive message of inclusion, just like the film. We wanted to convey a hopeful message that ‘however deep down you fall, if you’re beside me holding my hand, nothing will matter,” Chan-hyuk said.

Speaking about the music video to be released later, Chan-hyuk talked about how he falls endlessly. “If you get to see the clip, I continuously tumble down until the point where I hold Su-hyun’s hands. There’s a little tweak in this part. The screen is flipped upside down at this point to make it seem as if we’re soaring up in the sky, rather than falling.”

He added that those who grasp the message of the song would be able to picture the duality of this particular scene.

Chan-hyuk said the star-studded album centers around one common idea -- transcendent freedom, a term newly coined by the two. If their 2019 album’s “Freedom” explains freedom by “wanting to walk without clothes,” the pair tried to show a more buoyant mood in the latest album.

The singer described the meaning behind transcendent freedom as an “extraordinary power that goes beyond people’s physical limits, allowing people to unplug from any external influence.” Chan-hyuk added that he aims to bring out a message not to be swayed even if one descends.

When asked about what they wish to achieve through “Next Episode,” the chart-topping duo said they had set their hearts set on offering succor to those who are ready to make a leap of faith.

“I started my music journey with the bold ambition to change the world with our music. But I realized that changing everyone is not the destination we are heading to,” Chan-hyuk said. He believes that the beauty of the world lies in diversity and wishes to encourage those set for a new change.

From releasing an album with all jointly recorded songs to listing his name as a co-composer for Chan-hyuk, the duo also said they made several leaps of faith through the collaboration album.

“It was the first time producing an album filled with other singers,” the two said together. The pair likened teaming up with seven artists to the Avengers, adding that they are beyond grateful to pair up their voices with the nation’s leading singers.

The relaxing yet heartening seven-track collaboration album is set to release at 6 p.m.