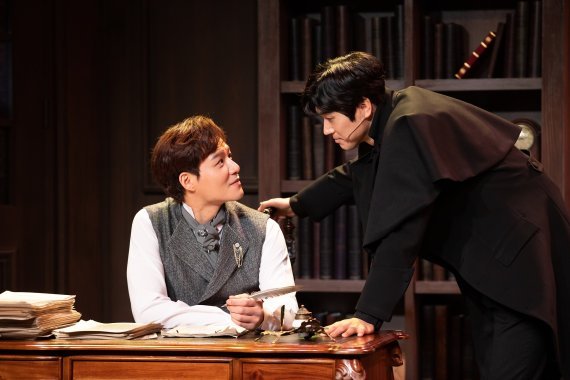 Musical “The Adventure of the Final Problem“ will be streamed online on July 30 on Welcome Daehakro’s YouTube channel. (KTO)
The Korea Tourism Organization is bringing five of the most popular performances from a performing arts tourism festival to the global audience online from July 30 to Nov. 26.

The event, “Welcome K-Stage,” will kick off July 30 with an online streaming of the musical ”The Adventure of the Final Problem” starring actors Kim Jong-goo and Jung Min. The musical is an adaptation of the last installment in “The Memoirs of Sherlock Holmes,” a collection of short stories by Arthur Conan Doyle that was published in the Strand Magazine in December 1893.

All performance videos will include subtitles in English, Japanese and traditional and simplified Chinese, with interview clips and behind-the-scenes stories from directors and producers.

The five performances are from the performing arts tourism festival “Welcome Daehakro,” hosted by the KTO since 2017. The festival, in partnership with Seoul’s theater district Daehangno in central Seoul, showcases various performing arts shows.

“This is the first time that full-length versions of local performances are being shown online with four different subtitles,” said Kim Young-hee, the director of KTO’s Hallyu Tourism Team.

Kim added that the four-month-long event will serve as a starting point for the team to develop performance-related tourism strategies and also to attract foreigners who may be planning trips to Korea.

Performances begin at 8 p.m. on the last Friday of each month via Welcome Daehakro’s YouTube channel. After each event, related videos and information will be released sequentially from August to November on the official website of Welcome Daehakro.