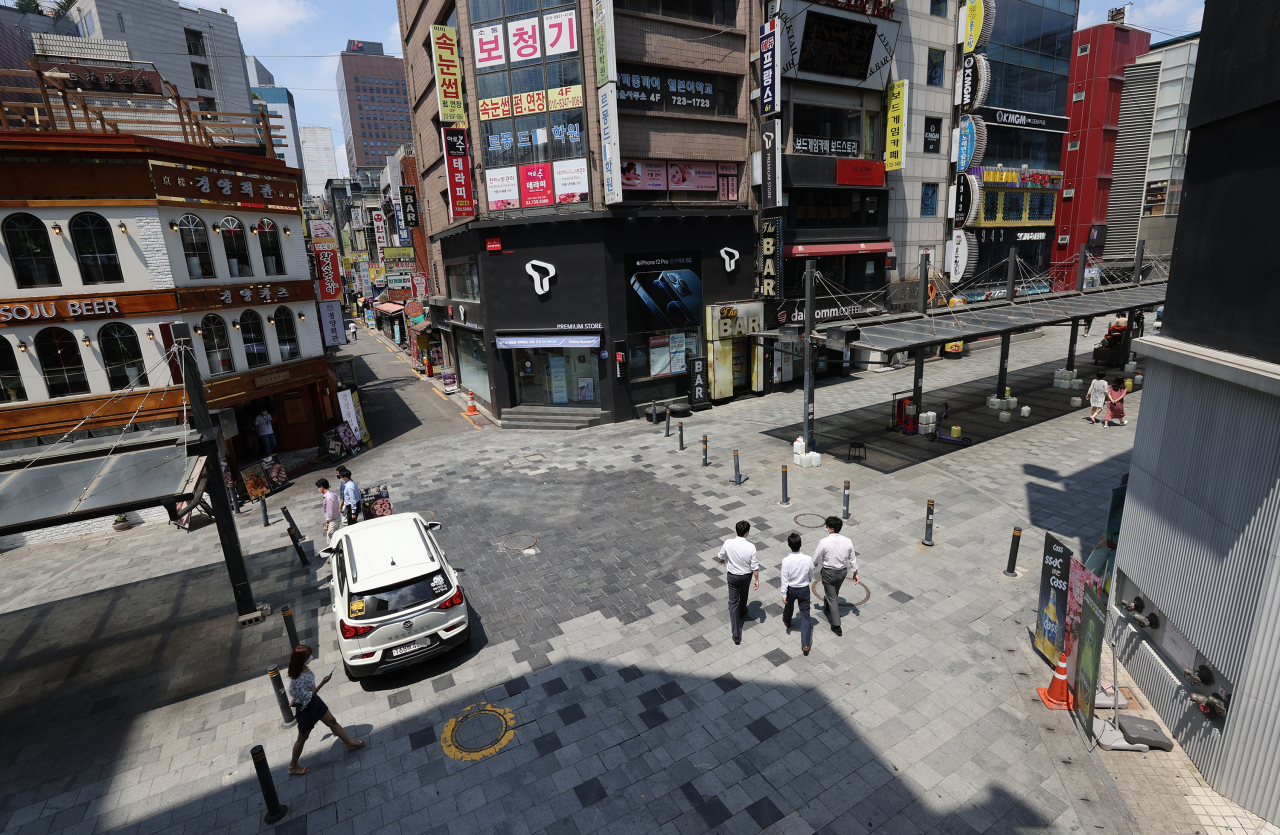 Seoul and nearby cities -- the epicenter of Korea’s current, largest wave of COVID-19 yet -- will stay under strict social distancing rules for another two weeks, health officials said Friday, as cases continue to break records.

The Ministry of Health and Welfare’s spokesperson Son Young-rae said in a briefing that the strictest social distancing tier would remain in place at least until Aug. 8, after two weeks of the same restrictions failed to squash the surge in cases.

“The spread in and around the capital appears to be slowing, but it’s hard to say that cases are on a downward slope at this point,” he said. The decision to extend the restrictions has been reached in discussions among municipalities and the central government, as well as outside experts on the advisory panel, he explained.

Korea logged 1,630 more cases on Friday, down from record high of 1,842 cases the previous day. Over the past week, case counts have averaged 1,526 a day, nearly 60 percent of which were traced to Greater Seoul -- Seoul, Incheon and Gyeonggi Province.

In the Seoul area, no more than two people can gather at a time past 6 p.m. under the restrictions. Cafes, restaurants and gyms can only open until 10 p.m. Weddings and funerals can have 49 guests at most.

But in most of other parts of the country outside Seoul, social distancing is still only minimally in effect. Concerts with audiences of up to 4,000 are still being held, for instance. Escort bars and other places associated with the sex trade are also allowed to open.

Son said closures or other further restrictions “may come into force if the situation does not stabilize at the end of two weeks.”

The Korea Disease Control and Prevention Agency’s deputy chief Kwon Jun-wook said in a separate briefing held later the same day that the latest wave “has a potential to get even worse” than the last wave that hit the country in December.

He pointed to the delta variant as the chief culprit, though officials had previously downplayed its presence in the country.

“The recent surge is most likely to be driven by delta, which is at once more virulent and transmissible,” he said.

“It took around six weeks for the winter wave to reach the peak before subsiding. But it’s going to take a lot longer than that this time. The baseline of cases is almost twice as high.”

Hospital beds for patients with COVID-19 were nearly 70 percent full across the country, with 19,461 patients currently in isolation. Back in mid-April, Son had said health care systems had been expanded since January to be able to withstand a tenfold increase in patients.

As of Friday, 57 percent of severely or critically ill patients were under 60, and therefore in age groups for whom vaccinations have yet to begun. Eight patients in their 20s were placed on invasive ventilation, unable to breathe on their own.

So far over the month, Korea administered an average of 122,322 vaccine doses per day, which is far below earlier projection by Jeong Eun-kyeong, the chief of the national disease control agency. Jeong had told an April plenary session of the parliamentary committee for health and welfare that come July, some 1 million to 1.5 million doses could be put into arms a day.

Korea’s age-based rollout is delivering the first doses to people in their late 50s from next week. The cohort of 50-somethings was initially allotted the vaccine made by Moderna, but some of them will receive Pfizer’s vaccine instead, the agency said earlier this week, over uncertainties in supplies.

Since the vaccination campaign started five months ago, 32 percent of 51 million people in the country have received at least one dose of a COVID-19 vaccine. The percentage of fully vaccinated people stands at 13 percent.

Korea aims to give more than 70 percent of the population their first doses before the end of September.