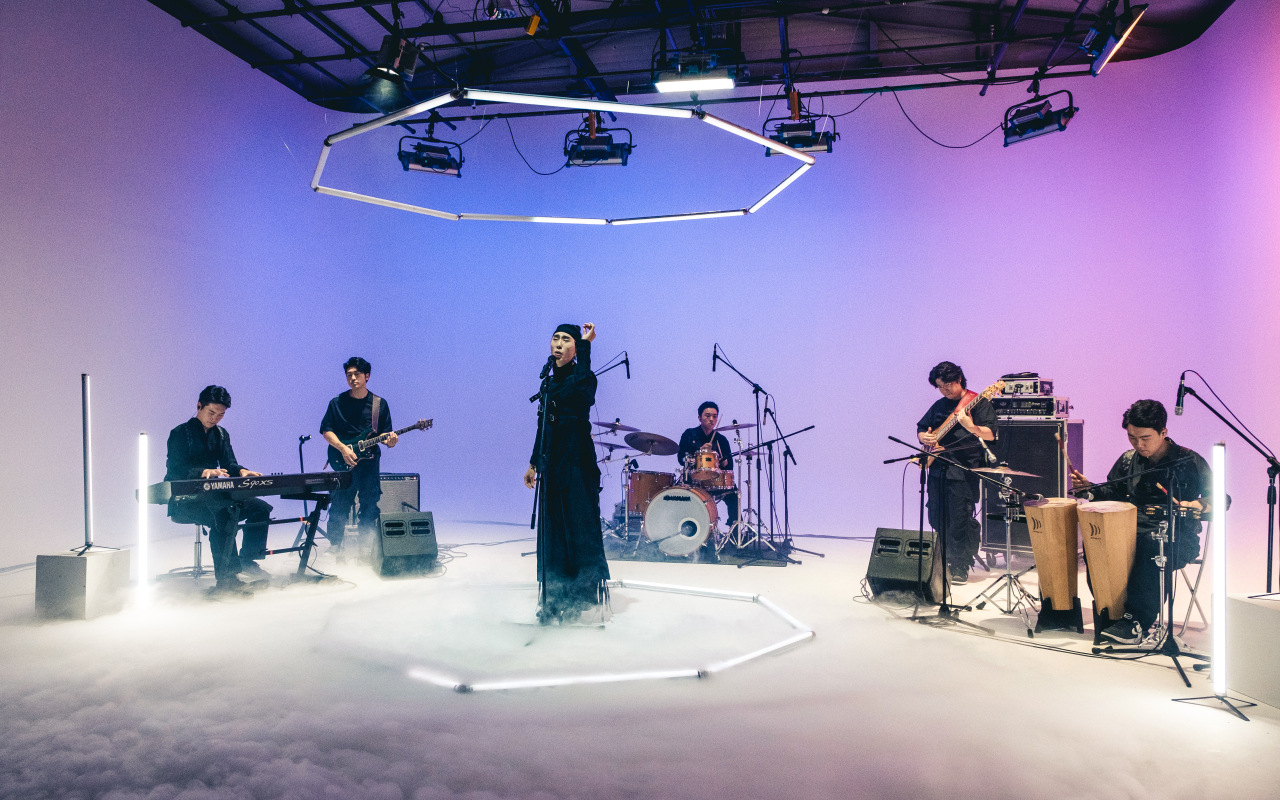 Seodo Band performs at “Journey to Korean Music” in 2020. (©Kim Shin-joong)
Judging by their looks alone, Seodo Band does not immediately strike one as a “fusion gugak” band, melding the traditional music of Korea with the sounds of the West. There are no traditional instruments in the band. And all for a reason.

“It is not that we don’t use them. Rather, we are not able to use them,” Seo Do, the vocalist of Seodo Band, said during an interview with The Korea Herald on July 14, explaining the absence of traditional instruments in the pansori-based band. Pansori is a traditional form of narrative singing. Along with Seo, keyboardist Kim Seong-hyun, percussionist Park Jin-byeong, guitarist Yeon Tae-hee, bassist Kim Tae-joo and drummer Yang Jung-hoon make up Seodo Band.

Because he knows the instruments intimately, having started learning pansori at the age of 4, he also knows the instruments’ limits in performing contemporary music, Seo explained. The band does not seek to exclude traditional instruments; in fact, it is waiting for the right moment, that is, when it becomes possible to use them effectively. In the meantime, the band is relying more on traditional vocal elements.

Despite the absence of traditional instruments, Seodo Band is decidedly rooted in traditional Korean music. The band refers to its music as “Joseon pop,” a term suggested by an acquaintance and one which the band readily took up.

“It came at a point when we were agonizing over our music,” said Seo. Once they had a name for their music style, things became easier -- they had a name with which they could describe the kind of music they do.

Seodo Band started out as an acoustic band in 2018 and took its current form in early 2020 with the addition of a bass guitar and a drum. It is not difficult to find videos of Seodo Band on YouTube performing at various gigs, shows and contests, their early performances mostly covers of pop tunes as well as their interpretation of well-known pansori pieces. The group did have reservations about participating in TV competition shows, but they “desperately” wanted to let themselves be known. 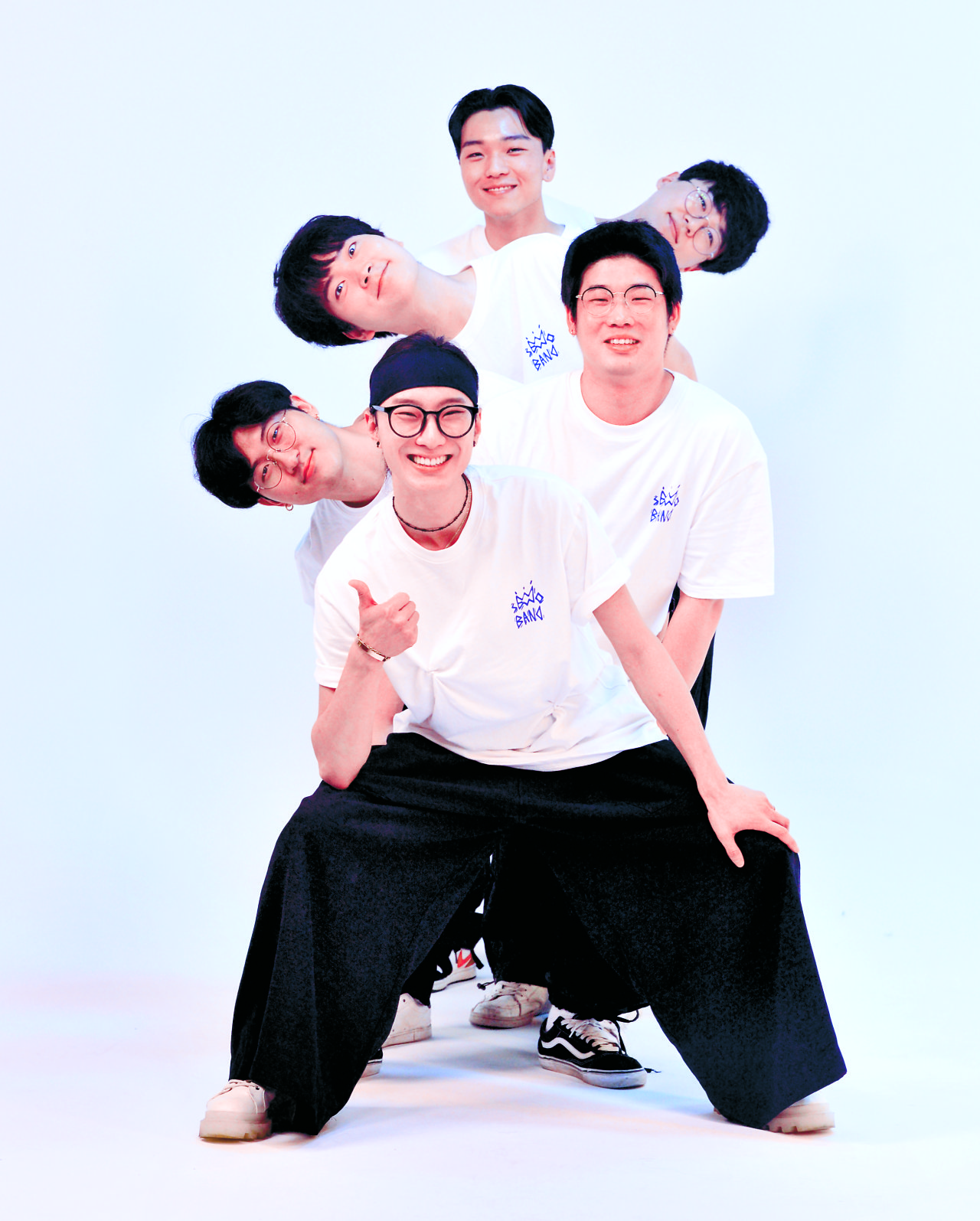 Clockwise from bottom: Seodo Band members vocalist Seo Do, guitarist Yeon Tae-hee, keyboardist Kim Seong-hyun, drummer Yang Jung-hoon, percussionist Park Jin-byeong and bassist Kim Tae-joo pose for photos before an interview at The Korea Herald in Seoul, July 14. Park Hyun-koo/The Korea Herald
In 2019, Seodo Band won two gugak awards that recognize young, new talents. The awards took the band by surprise -- after all, they did not have a single traditional instrument on stage.

“We had not expected the prize. Other participants had more gugak elements,” said guitarist Yeon, as he recalled winning the top prize at the 2019 KBS New Gugak Talent Awards. For percussionist Park, the prize was a validation of the music the band had been pursuing. “A judge said that he thought (our act) was the perfect harmony of gugak and contemporary music. It was something I had wanted to hear,” said Park.

With its first EP “Moon: Disentangle,” which came out last month, Seodo Band makes clear the music it is pursuing. The five-track album is arranged as a single narrative, starting with “Tic Toc,” a cacophony of sounds, including the tick tock of a clock. Described as a prologue to the album, this very short piece leads seamlessly to “City Lights.”

“City Lights,” while the most pop music-like piece on the album, has many elements of traditional Korean music scattered throughout. “Like a treasure hunt, there are many gugak elements hidden within the song,” said drummer Yang. Traditional instruments such as kkwaenggwari, a small hand-held gong, for example, are used in the introduction. “The bridge portion also features ‘byeoldalguri jangdan,’ which you would have heard during elementary school music classes,” Yang said, referring to a fast, rousing beat.

“Flower Without Fragrance” is notable for its long rap-like narrative, a form borrowed from pansori. Pansori typically has segments where the singer narrates freely without a melody or regular beat. “I composed it when I was 19 and it was originally a rap,” said Seo. “It expresses frustration, anger at the situation today where one cannot see one’s own light.” The soul sound that pervades the piece, interestingly, derives from the pansori vocal style, dipping low and deep and then rising.

The titles of the next two songs -- “Baetnorae” and “Ganggangsullae” -- will be familiar to most Koreans. But listeners are in for a surprise. Seodo Band has reworked and tweaked the two original pieces into entirely different works. Among the few similarities they bear to the original folk songs are the choruses. Yet the sentiments expressed by the folk songs are all there.

“’Baetnorae’ is the story of sailing to a utopia,” said Seo. “Ganggangsullae” concludes the album’s story with people singing together upon reaching that ideal place. 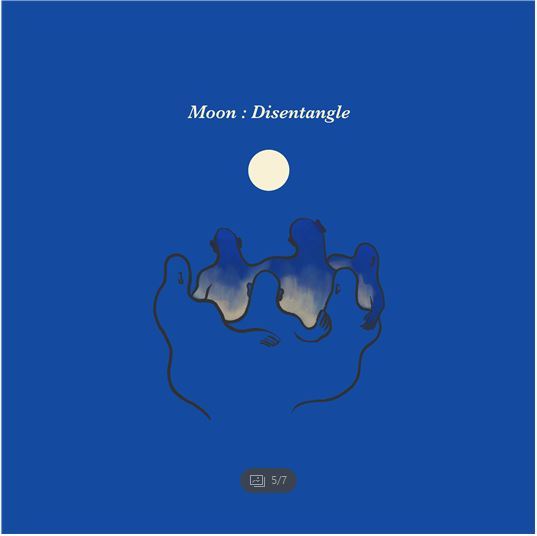 “Pansori is storytelling. In making the album, I saw a story,” said Seo. The band plans to issue future albums in a similar form. Such story-based albums could become the band’s defining identity, according to Seo.

Already, the band’s music and performance styles are distinctly their own. Just as their music is fluid --slipping between Western and traditional Korean influences- so is the performance style.

On stage, Seo wears what is commonly referred to as “gender-fluid” look. In one performance, he wore a top made of two different colored fabrics. One side was in red to represent Chunhyang, the heroine of “Chunhyangga,” and the other side was in blue to represent her lover Mongryeong. It made sense because Seo was performing both characters.

“I like the genderless feel. Also, pansori is a genre in which one singer portrays multiple characters. In one part I could be a man, and in the next, a woman,” Seo said. “I really like it when people say that they get the genderless vibe (in the performance). I take it as meaning that I have suitably expressed all the different characters,” he added.

Such freedom to fully express the characters comes from being prepared, Seo noted. “I believe that I need to be really perfect on the stage. I need to be fully prepare for the stage,” he said.

Seodo Band turned to crowdfunding for its first EP and achieved 150 percent of its funding goal. “We were able to produce the album and two music videos,” said Seo, who described the crowdfunding process as not only an opportunity to raise money for the project, but also an opportunity to communicate with the fans and grow its fan base.

The band has had three concerts “disappear” due to the COVID-19 pandemic. The last time it performed overseas was in Shanghai in December 2019. More than anything else, once the pandemic is over, the band would like to perform at a big music festival abroad.

Meanwhile, Seodo Band will be holding an online concert at 8 p.m. on Sunday on its YouTube channel. While it cannot replace a concert recently canceled due to the fourth wave of COVID-19 pandemic, the band wants to make it as good as an in-person event.

“We were very disappointed with the cancellation so we are practicing a whole lot more,” said guitarist Yeon.