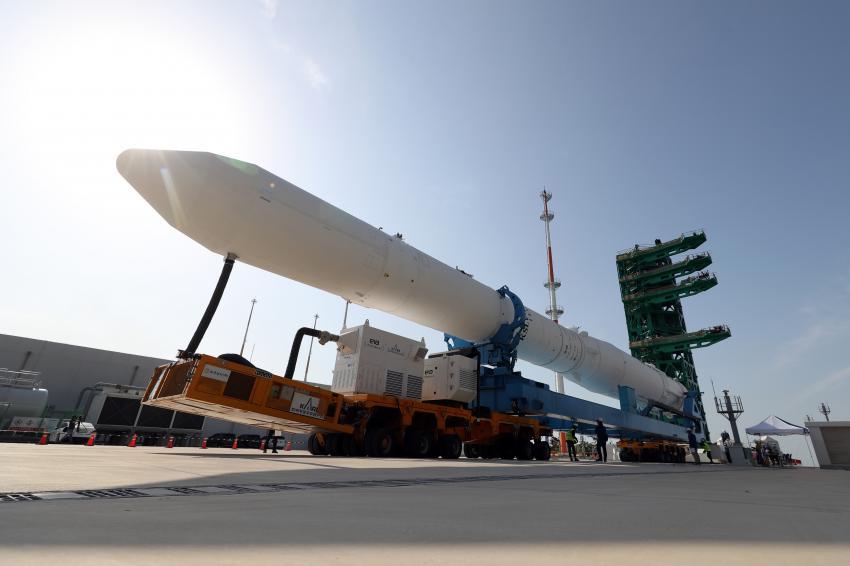 A test model of the Nuri space rocket scheduled for a launch in October this year is transported to its launch pad at the Naro Space Center in Goheung, 473 kilometers south of Seoul, in this file photo taken June 1, 2021. (Yonhap)
South Korea's science ministry said Tuesday it will create a space policy-oriented think tank in a move to bolster its space development ambitions.

The country has recently ramped up its space program, with its first homegrown space rocket set for a launch in October and a lunar orbiter program scheduled for next year.

The Ministry of Science and ICT said the new think tank, tentatively named the Korea Space Policy Research Center, will conduct space-related research and analysis to offer guidance for the country's space development policies, as well as private sector efforts.

The think tank is expected to be formed with space industry experts from the Korea Aerospace Research Institute, Korea Astronomy & Space Science Institute and the Agency for Defense Development.

South Korea, a relative latecomer to the global space development race, has revved up efforts in space-related technologies to propel growth in future industries, with aims to develop over 100 miniature satellites by 2031.

South Korea also received a boost in its space program earlier this year after it made an agreement with the United States to completely scrap its missile guidelines, which had limited efforts to develop space launch vehicles. (Yonhap)