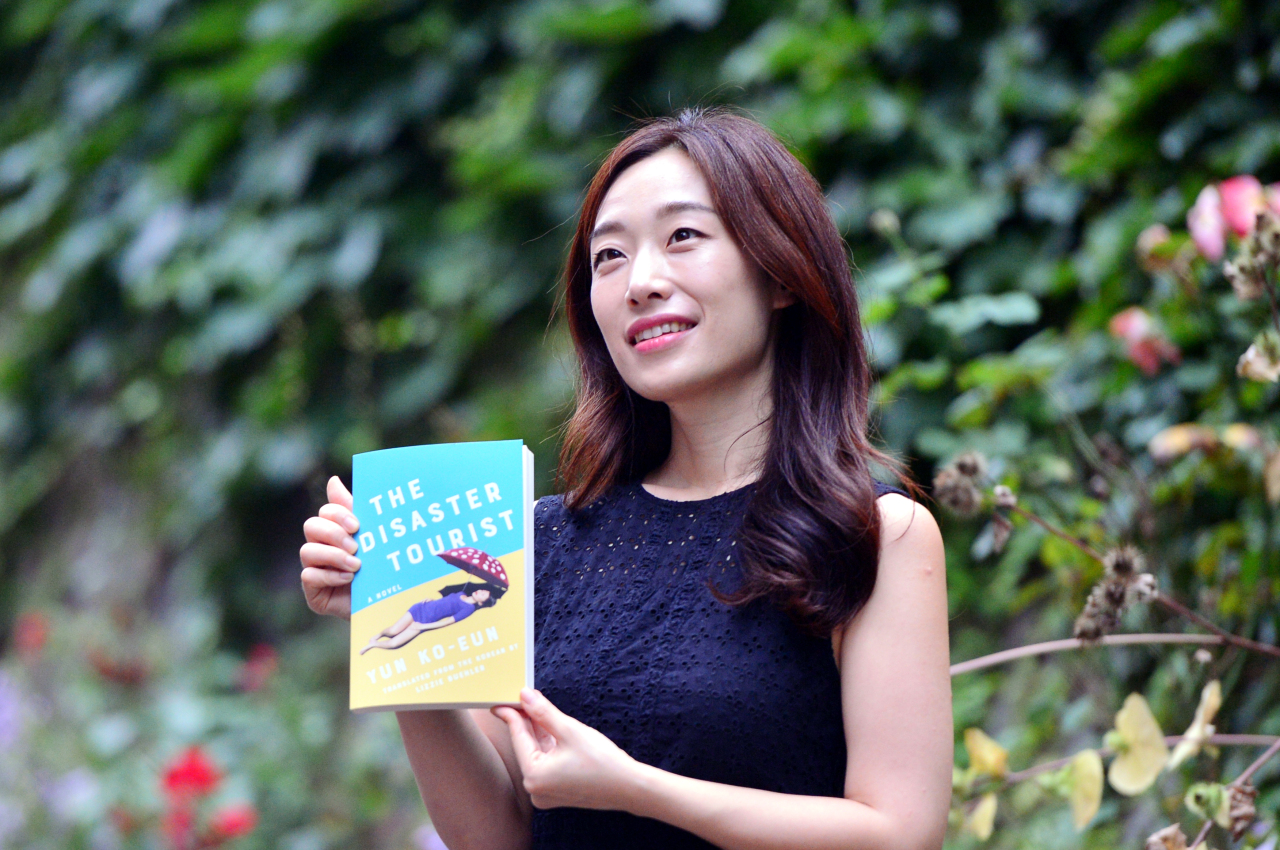 Yun Ko-eun poses with her book, “The Disaster Tourist,” during an interview with The Korea Herald on Wednesday. (Park Hyun-koo/The Korea Herald)
Contrary to the typically mysterious, keen and dark image of crime fiction writers, not a hint of grimness could be found in the appearance of Yun Ko-eun, 42, the winner of this year’s CWA Crime Fiction in Translation Dagger, who appears bright, positive and full of energy.

The CWA Daggers, established in 1955 by the Crime Writers’ Association, are presented as awards for the best in crime writing in 11 categories, including fiction and nonfiction. Yun is the first Asian to be recognized, along with Lizzie Buehler, who translated the work from Korean to English.

The award-winning novel “The Disaster Tourist” centers around Yona, a coordinator at a travel agency who specializes in disaster tourism, such as in areas hit by tsunamis, hurricanes and other natural disasters. Yona is about to quit after 10 years at the company when the boss, who had sexually harassed Yona, tells her to take a break instead and sends her off on a vacation. The story unfolds as Yona encounters a desert sinkhole on a remote island.

Published in the UK last year by Serpent’s Tail, the novel was met with positive reviews. The Guardian called the book “an entertaining eco-thriller that sets out to illuminate the way climate change is inextricably bound up with the pressures of global capitalism.” It was also on Time magazine’s list of “12 New Books You Should Read in August.”

“I’m willing to dive into this fantastic wormhole and write even more freely from now on,” Yun said in an online acceptance speech on July 1.

“Had I known that I was actually going to win the prize at 3:30 in the morning, I would have written down my speech more thoughtfully,” Yun said a week after the win in an interview with The Korea Herald at Hotel Prince Seoul. The hotel located in Myeong-dong runs a support program for authors, providing space to write and hold meetings and seminars.

Yun explained that the wormhole was a theme that had lingered in her mind after it was brought up on her radio program while talking about Christopher Nolan’s 2014 film “Interstellar.”

Such random moments and ideas have made the author who she is today.

“The year I recall was 2005, when I first came up with the theme for ‘The Disaster Tourist.’ I saw a news piece on dark tourism, that there were people dressed up in waterproof gear to travel to regions where natural disasters had hit. It was a fresh moment of shock and fear to me,” she said.

Yun then started looking into natural disasters in recent history and how different people sought to fulfill their divergent needs in the aftermath of disasters. Likewise, it is up to the critics and readers to decide to which category the novel best fits, Yun explained.

“The Disaster Tourist” is now among five long-form translated works shortlisted for the Science Fiction and Fantasy Rosetta Awards 2021, proving the point about the flexibility of the book’s genre.

Translator Buehler, a 26-year-old Ph.D. student in Harvard University’s department of comparative literature, is one of the many to whom Yun is grateful. “My dear friend Lizzie and I have exchanged emails for four years, first becoming buddies online. I met her in person for the first time in 2019, and showed her around the town and places where I got my ideas from. I gladly became her travel agent for the day,” she said.

Since Buehler had read all of Yun’s writings, she was the first foreign reader that Yun could reach out to for honest feedback. Yun explained how lucky it was for her to have Buehler grab her book, find it interesting and start working on its translation. 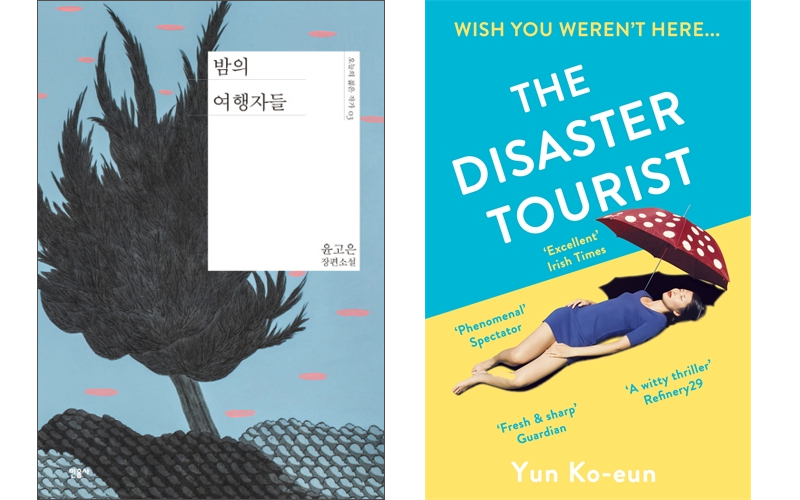 “The Disaster Tourist” (LTI Korea)
Although exchanging detailed questions and answers with the translator was a pleasant process, communication was not easy when it came to packaging one’s stories to make them appeal to a global audience.

She cited discussions with her publisher and agency over the book’s cover as an example.

“At first, I didn’t like the book cover. I loved the yellow and blue tone, but the model wasn’t at all the character that I had imagined while writing,” she said. The bathing suit-wearing Asian model’s seemingly twisted torso and legs, that are in contrast with the peaceful, almost expressionless face, was an unpleasant illustration to look at,” Yun said.

However, after numerous email exchanges of reedited versions, Yun came back to the original cover. “I like the cover now. It’s a lucky charm that I carry in my bag.” Yun gave a big smile, gently patting the cover of the book.

When asked how she feels about being highlighted as one of a group of young female Korean writers setting new milestones for Korean literature overseas, Yun replied with caution. “Frankly speaking, I have never thought of myself as a person fit for a particular category.”

Yun feels the same when bringing a character to life in her stories. Protagonist Yona’s situation is not specifically tied to what is happening in Korean companies, but rather the abuses of power and violence that could take place in any company today.

Asked about Yun’s hopes for Korea’s literary industry and elements that need more support, she said that letting writers write what they want, regardless of market trends and popularity, is extremely important.

“Creating an atmosphere for writers to maintain their own silent world is vital,” said Yun, who also wished that Korean works of literature could be translated soon after their publication so that readers around the globe could empathize with the story at a time not too distant from the time it was written.

Yun’s upcoming piece is on marriage insurance, a satirical novel pointing out the problems of marriage with market-driven capitalistic ideas.