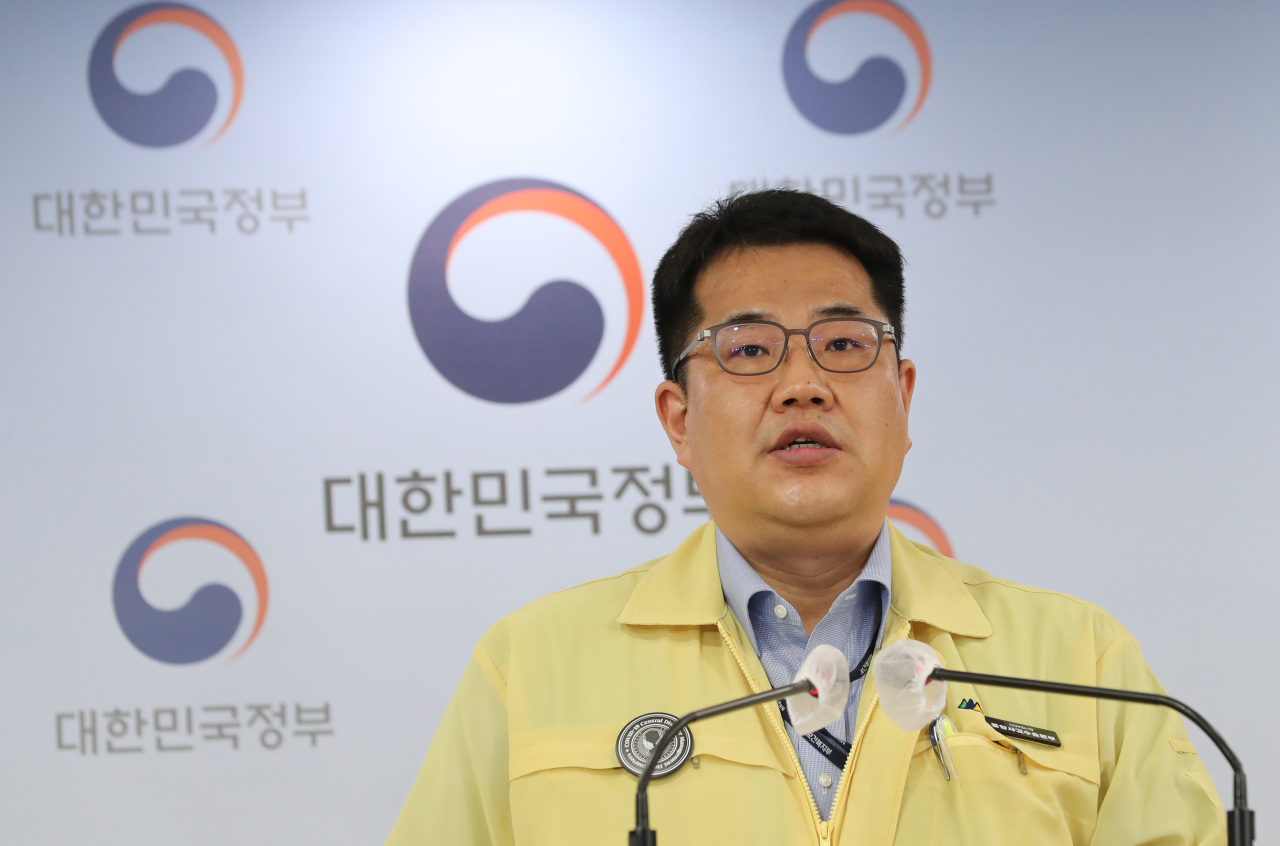 Son Young-rae, spokesperson for the Ministry of Health and Welfare, speaks to a news briefing. (Yonhap)

Korean plans for a more normal summer appear to be dashed by a likely resurgence -- as delta, the latest alarming variant of COVID-19, gains traction globally. Seoul and nearby cities were excluded from the nationwide reopening Thursday, despite health officials vouching less than a week ago that the country was ready for it.

Ahead of the weekend, Prime Minister Kim Bu-gyeom, alongside the Korea Disease Control and Prevention Agency’s Commissioner Jeong Eun-kyeong, issued a special address calling on Koreans to continue to abide by safety precautions as the delta variant tightens its grip in the capital.

“Our fight against COVID-19 is facing a grave crisis just as life was slowly returning to normal,” the prime minister said Friday, when the number of daily new infections rose past 800 for the first time since early January. “The trends in and around Seoul are especially troubling, with 90 percent of the highly transmissible delta variant cases found there.”

The theme of government COVID-19 briefings shifted from a return to normal to pleas for caution in just a matter of days.

On June 24, a week prior to the scheduled reopening, the Ministry of Health and Welfare’s spokesperson Son Young-rae told reporters the delta variant “doesn’t constitute a concern in Korea,” and the COVID-19 situation here “is stable and under control.”

“Postponing the July 1 reopening on account of the delta variant would not be necessary,” he said.

But a few days later on June 28, Son said in a closed-door briefing the plan to reopen “may need to be adjusted” as growing caseloads and new variant-driven outbreaks trouble the most populous Seoul and its satellite cities. In a sudden change of course, the ministry said in Wednesday’s emergency briefing that the lifting of social distancing rules in the Seoul area would be put off a week.

Asked if he stood by his previous statement, Son said in the same briefing the delta variant was “on a steady rise” and as such “being closely monitored.” He went on, “However, no variant has yet to become the dominant strain in Korea. The delta strain still accounts for a small fraction of all variant cases.”

But Korea is not doing enough surveillance to grasp how widely variants may have spread, according to Dr. Paik Soon-young, a virologist at Catholic University of Korea.

“Korea is sequencing only 15 percent of all patient samples a week, which is not enough to catch up with the spread of the variant,” he said.

The delta strain is said to have a “doubling time” -- referring to how long it takes to double its prevalence -- of about two weeks, according to health officials in the US, where the variant is rapidly spreading. Japan predicted the delta variant could make up 68 percent of its cases by the time the Tokyo Olympics kick off on July 23.

And it could be “only a matter of time” before the new variant “moves toward dominance here as well,” Paik said

He added that the Health Ministry was “wrong to push ahead of reopening, and downplay the potential of the variant to threaten COVID-19 response.”

Korea’s COVID-19 recovery policies were being based on one-dose vaccination rates, which may not mean much in face of the delta variant, according to infectious disease professor Dr. Kim Woo-joo of Korea University.

“One dose is only marginally effective against delta at 33 percent. It’s after two doses that we can expect sufficient protection against the variant,” he said. Four months into its rollout, Korea has vaccinated 29 percent of its approximately 51 million people with at least one dose of a two-dose regimen vaccine, while just 10 percent have been fully vaccinated.

“The UK and the US, which are among the most well-vaccinated countries, are all ramping up efforts to vaccinate the younger populations, while Korea is still vaccinating people in their 60s,” he pointed out. As vaccinations proceed in the order of age, people in their late 50s will become eligible in the final week of July, and anyone younger from August on.

Kim proposed shortening the wait until the second dose for first-dose recipients of the AstraZeneca vaccine, which is administered 11 to 12 weeks apart, to give them maximum protection faster.

Dr. Jung Ki-suck, a former Korea Centers for Disease Control and Prevention Agency director, said he agreed with easing social distancing as more people get vaccinated, but added that “the bulk of the rules were being lifted at once, and too soon.”

“The summer reopening has been promoted by health officials for so long now that it’s going to be harder for them to make a U-turn.”

Korea logged 743 additional cases out of 45,207 tests conducted over the last 24 hours ending Saturday at midnight -- the highest to be recorded on a weekend since mid-December. Cases are usually lower on weekends when fewer tests take place compared to weekdays.