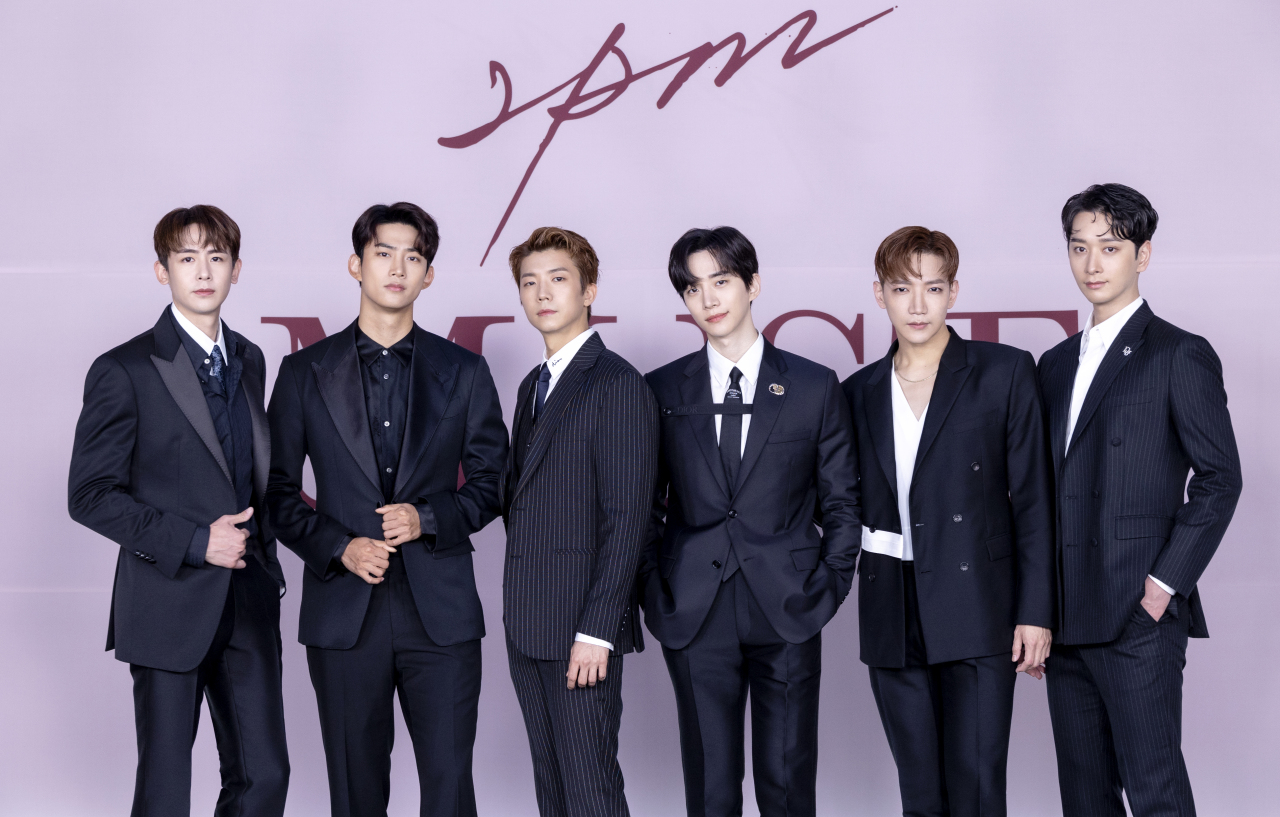 Members of K-pop group 2PM pose for picture during press conference held in Seoul on June 28. (JYP Entertainment)
Boy band 2PM made a bit of K-pop history on Monday, when it staged the first return by a second-generation idol group after a five-year hiatus.

It’s only been 100 days since Junho, the last of the members to serve the armed forces, was discharged from his compulsory military service.

Dropping their seventh studio set “Must,” the group conducted an online press conference, first time in five years the six members stood officially in front of the media to introduce their music.

“It feels strange to be returning after such long time. We’re grateful just for the fact that we had people waiting for our comeback and that we were given the chance to do so,” member Chan-sung said.

Restarting afresh with all six men now in their 30s, the members seemed more mature and calm on the stage, all buttoned up and dressed in black.

“Although the five years felt long, standing here right now, everything seems to fit right in and comfortable as if we’d been here just few days ago,” Woo-young said.

As the title implies, the new album “Must” has 10 tracks that cannot be missed out on.

Leading the album is “Make It,” which Woo-young helped write, an addictive tune about an urge to make things work with his love.

“It started with two questions: What would I do if I fell in love again, and also, what I should do now with 2PM’s new album. The answer was ‘just make it work,’” Woo-young said.

Along with Woo-young, Jun. K and Taecyeon took part in the production of seven of the songs on the album.

“It’s our first album we’re dropping in our 30s. While we had been taking on diverse concepts in our 20s, coming from the overflowing energy and youth, this album was about showing what we can do at this age,” Taecyeon said.

Chan-sung said, “all members have all matured and evolved over the last five years, and I think our growth as individuals has come together to complete this album.”

Debuting in 2008 under JYP Entertainment with the album “Hottest Time of the Day,” the sextet became an instant hit, with fans wowed by their “beast-like masculinity,” an unconventional concept in K-pop at the time, which was dominated by a softer, pretty-boy image. Their biggest hits include “10 Out of 10,” “Again & Again” and “Heartbeat.”

Following the release of their sixth full-length album “Gentlemen’s Game” in September 2016, the South Korean members left for military, starting with Jun. K and Taecyeon in early 2017. Thai member of the group Nickhun was also subject to military draft lottery in his home country but was not called up in the end.

Ahead of their official return, 2PM’s name was all over the internet with the unanticipated online popularity of their 2015 song “My House” last year. This jolt to popularity paved the way for the second-generation idol group to make a smooth comeback.

Jun. K, who took part in the production of the 2015 song, said, “we’re grateful that the song is still loved even now. As many people now recognize us through the song, it was our job to make sure that we showcase a different side of us through the new album.”

It’s not only the half-decade break that makes 2PM’s return so special, but the fact that five members of the group carried out their compulsory military service, continued their careers individually, and still managed to stay together. It’s common for K-pop boy bands to break apart naturally or disband as the members enlist. All able-bodied South Korean men between the ages of 18 and 28 must serve in the armed forces for about 18 months.

Taecyeon, who left JYP in 2018 but remained part of 2PM, said the key to their longstanding partnership was teamwork and continuous communication between the members and with the company.

“It’s not common for a group to make comeback after the members leave for a different agency. So it’s important that the members stay in contact and also build trust with the agencies. It’s important that you understand each other’s situations,” said Taecyeon, who has been more focused on his acting career since he left JYP.

Junho said, “I think it’s the tight-knit relationship between all the members. We continue to stay in contact, we drink together and share thoughts about our futures and so on,” adding, “I hope we can find out more on how to endure in the coming future.”

On closing the event, Nickhun said they hope to overcome their “beast-dol” nickname coined by fans.

He said, “although we enjoy such nickname, we ‘2PM is just 2PM.’ We always try our best and stay humble to become the best artists we can. Like the title of our new album ‘Must,’ we just do what we can to ‘make it.’”