[ The Korea Herald – Send E-mail ]
[Eye interview] New book offers unfettered look into life in North Korea
Lindsey Miller recounts the stress of constant questioning, her decision to believe in authenticity of relationships during her two years in Pyongyang
By Kim Hoo-ran
Published : May 8, 2021 - 16:01
Updated : May 8, 2021 - 16:01 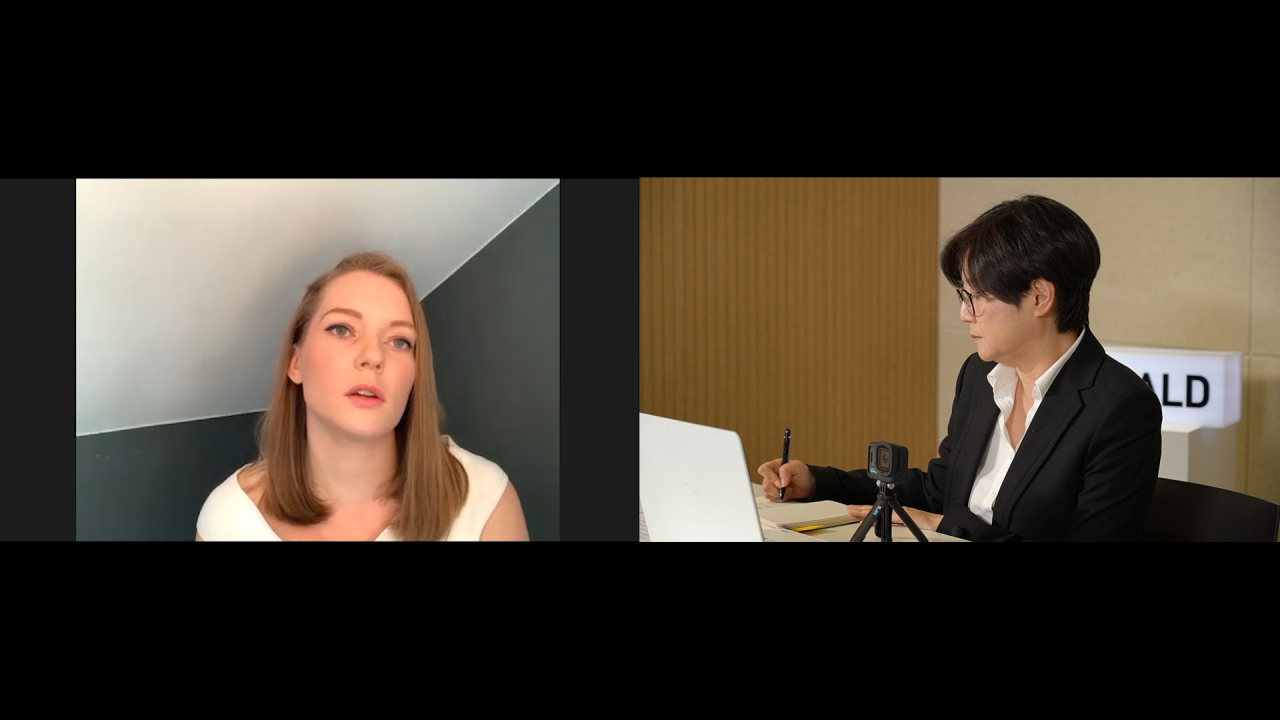 Miller, who lived in North Korea from 2017 to 2019, accompanying her husband who held the post of political secretary at the British Embassy in Pyongyang, still grapples with that question two years after returning home. And she is not alone.

North Korea is an enigma that perplexes experts, visitors and even casual observers who hear about the country in the evening news.

Writing about a four-day visit to Pyongyang and Myohyangsan in 2005, I faced a conundrum: I saw what I saw, but was that real? How does a reporter even begin to write about a place and people when she is uncertain about the truth of what she has seen?

The same question plagued Miller to a much greater degree, I am sure, given the length of her stay and the degree of freedom and access to places she had as part of the diplomatic community.

I had been following Miller’s tweets of photos of Pyongyang and her outings to the surrounding areas for a number of years, wondering if she were actually tweeting from inside North Korea.

She was indeed tweeting in real time from Pyongyang, Miller told me during a Zoom interview from London on April 27. It might come as a surprise to some that from inside a compound in Munsu-dong in eastern Pyongyang, where most of Pyongyang’s foreign community live and work, Miller had access to satellite TV and the internet. She also had a Korean smartphone which, however, would only connect to other foreign residents and a designated interpreter.

Miller arrived in Pyongyang in May 2017. No amount of reading or previous learning about North Korea could have prepared her for what she would experience over the next two years. And a big part of that experience was constant questioning -- questioning reality and authenticity. 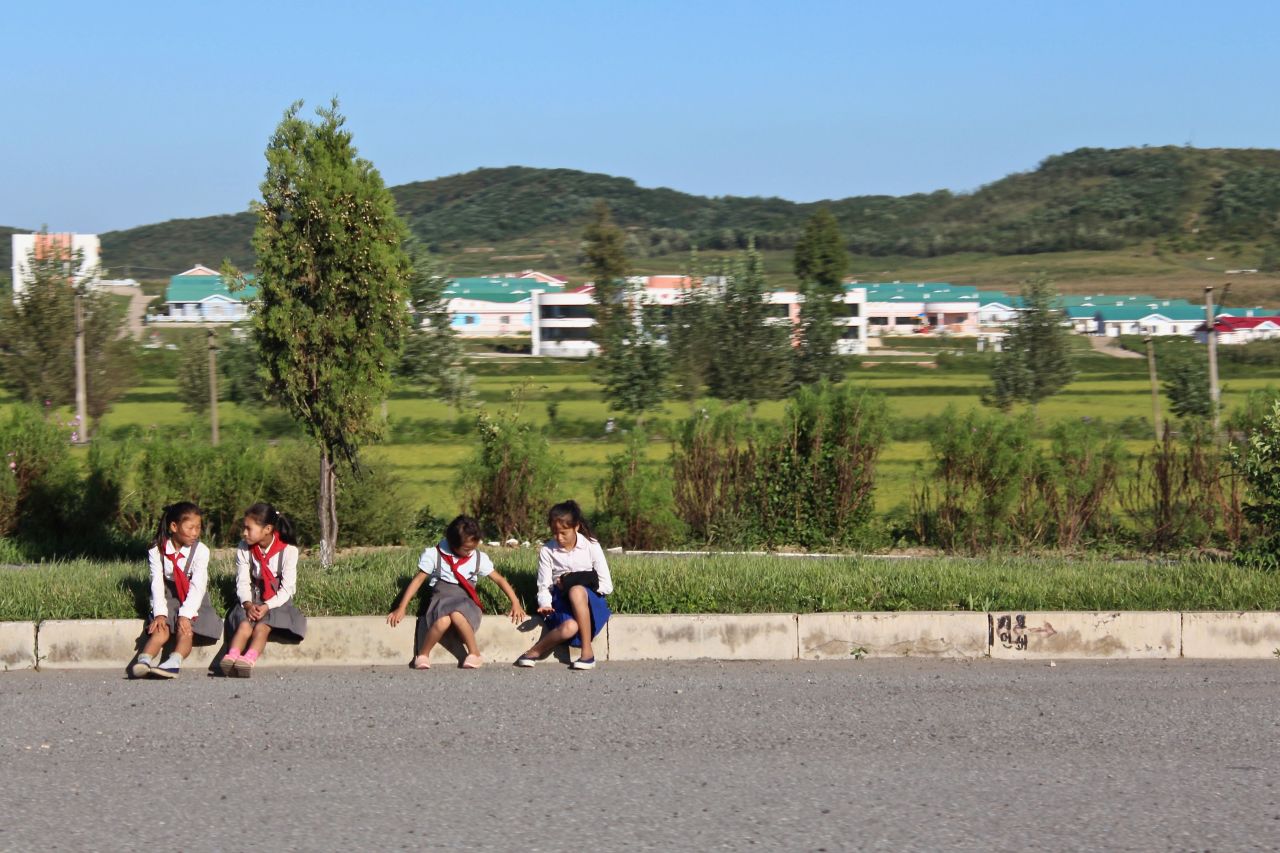 A group of children sit by the roadside on Youth Hero Highway in September 2018. (Lindsey Miller)
With her interactions with North Koreans very limited, and uncertain as to whether even those very limited interactions were authentic, Miller was in constant doubt about what was true and what was not, doubting even herself. “Life became about reading between the lines, discerning what Koreans really meant, and watching them skillfully sidestep the rules and walls that defined every aspect of their existence,” she writes.

As a way to see North Korea, she turned to photography. She was not censored or restricted in taking photographs. No one ever asked her to delete a photograph. Nevertheless, she exercised a sense of self-censorship, taking care not to put her subjects in a position that might be “dangerous for them,” not taking portraits or close-up shots.

She amassed a collection of 12,000 photographs that show ordinary North Koreans going about their lives, the military in training, both the shiny modern high-rises of Mansudae, an enclave of Pyongyang’s elites, and derelict buildings of the countryside and Pyongyang streets on an ordinary day.

“North Korea: Like Nowhere Else” stands apart from these previous efforts -- one a book of essays and black-and-white photographs that captures the “exoticisms” of “the Far East,” especially its women with the devastation of the Korea War as the background and the other reinforcing images of North Korea familiar to outsiders whose only exposure to the country is the glimpses of mass parades, missiles and tanks on the news.

Miller, who is not a professional photographer -- she is a professional musician actually -- rather than train her lens purposefully on subjects, appears to have taken snapshots whenever the moment suited. Her photos catch people in off-guarded moments and many of them are sketches of life and nature.

Upon returning home to Britain, the photographs proved to be of solace for Miller, who was despondent over leaving and knowing that she would never meet her North Korean friends again.

Looking at the photographs, she saw what she had not seen before -- little details that offer a crack into the surface reality of North Korea and the subtle changes over the two years in the people and the sceneries that she had not noticed. 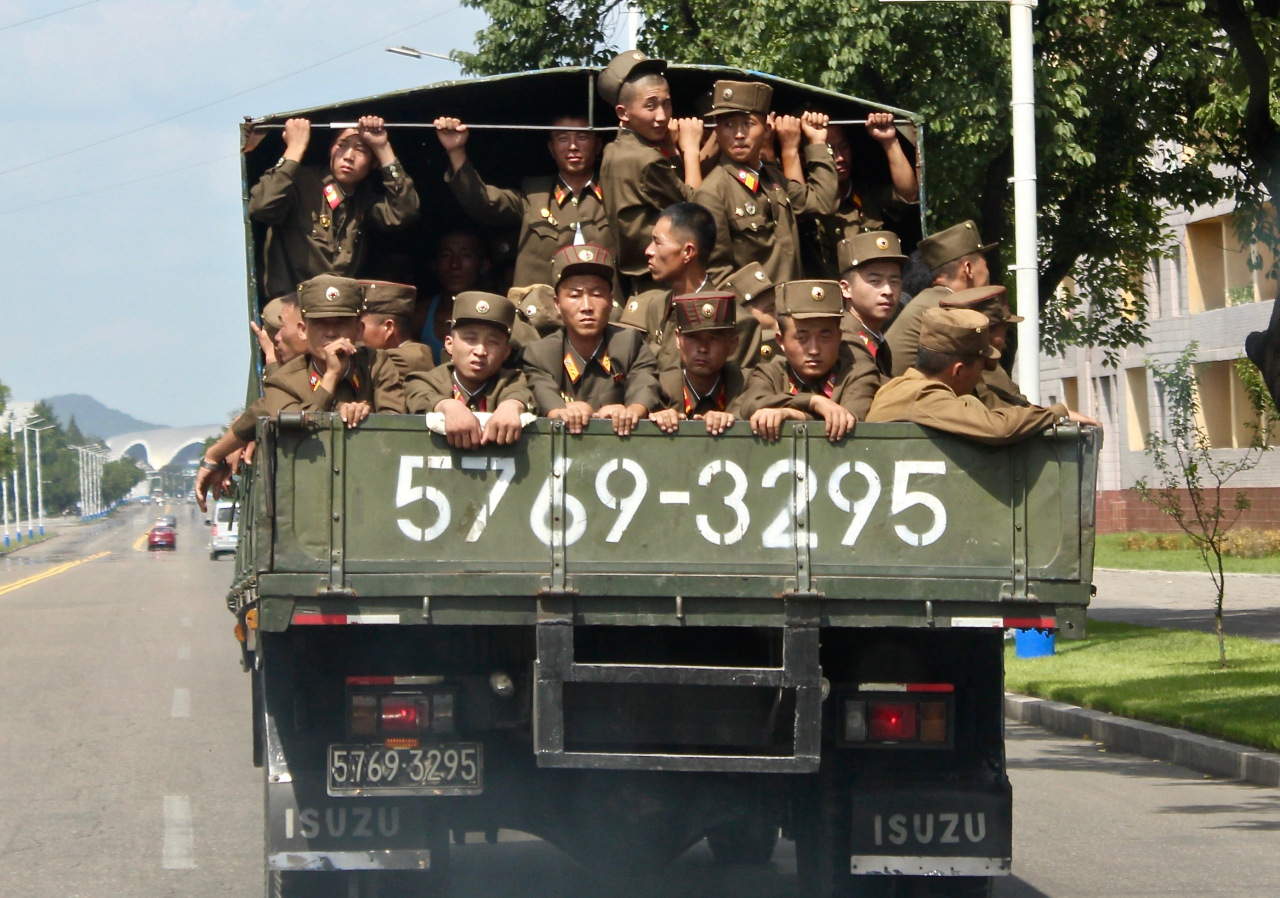 Soldiers are transported on back of a truck in Pyongyang in August 2018. (Lindsey Miller)
Miller lived in Pyongyang through a particularly tumultuous time. Having arrived in June, she heard the Hwasong-12 ballistic missile, launched from Pyongyang International Airport, fly overhead one morning in early August. She expected people to react to the event, but there was no news of the launch and even if people knew, nothing was apparently out of the ordinary that day.

In contrast, the launch of Hwasong-15, an intercontinental ballistic missile, in November, was announced the same afternoon. In her book, Miller details how she went to the train station to watch the announcement broadcast by Ri Chun-hee, a familiar face to North Korea watchers. She found a mixture of reactions. Some looked nonchalant, while others clapped and cheered. Then came a group of about 100 people who “lined up in neat rows, waving flowers, clapping and crying on command” and the Korea Central News Agency camera crew who materialized out of nowhere to film the staged performance. When the announcement was over, the crowd dispersed, the camera crew drove away and the large screen returned to whatever it had been broadcasting before. She had just witnessed North Korea’s state propaganda machine at work. It would be the image of people crying tears of joy, wildly jumping up and down that would be seen by the rest of the world.

Tensions escalated throughout 2017 and the Millers had a packed suitcase ready in case they needed to evacuate.

Things changed abruptly on New Year’s Day 2018 with North Korean leader Kim Jong-un’s New Year’s Day Address in which he said North Korea would send a delegation to the PyeongChang Winter Olympics, to be held in South Korea the following month.

“The mood changed from very tense to one of optimism,” Miller said of the early months of 2018. North Koreans sent athletes as well as a high-level delegation to the Olympics. Pyongyang hosted a K-pop concert.

She also detected a change in rhetoric. “For an outsider it was easy to dismiss, but for me it did feel different,” Miller said.

Then the Singapore summit between US President Donald Trump and North Korea’s Kim happened in April. “North Koreans were asking questions about it,” she said. As for the failed Hanoi summit of February 2019, North Koreans did not directly ask her about it, she said. But one could sense North Koreans wondering “Where is this going?” Miller said.

“Foreigners often were the most skeptical,” she said, adding, “They ended up being right.”

Ups and downs of geopolitics in those two years must have felt like a roller-coaster ride, but Miller focused on the people. “North Korea changed in small ways. There were changes in attitude toward foreigners, foreign goods,” she said. The demand for foreign goods was very high and buildings went up overnight on the back of slave labor, she said.

Living in what is variously described as a totalitarian state, failed state, a hopelessly dismal country, were there ever moments when she was happy?

“Happy was a guilty feeling at the time,” she said. But she felt happiness at small moments.

“Calm and connection with people were the most cherished moments,” she said, recalling a spontaneous interaction at a water park looking at a baby. “He (the elderly man) wanted to celebrate his new granddaughter,” Miller said. She felt an honest connection in those five to 10 minutes until a man in a suit appeared and that interaction stopped. 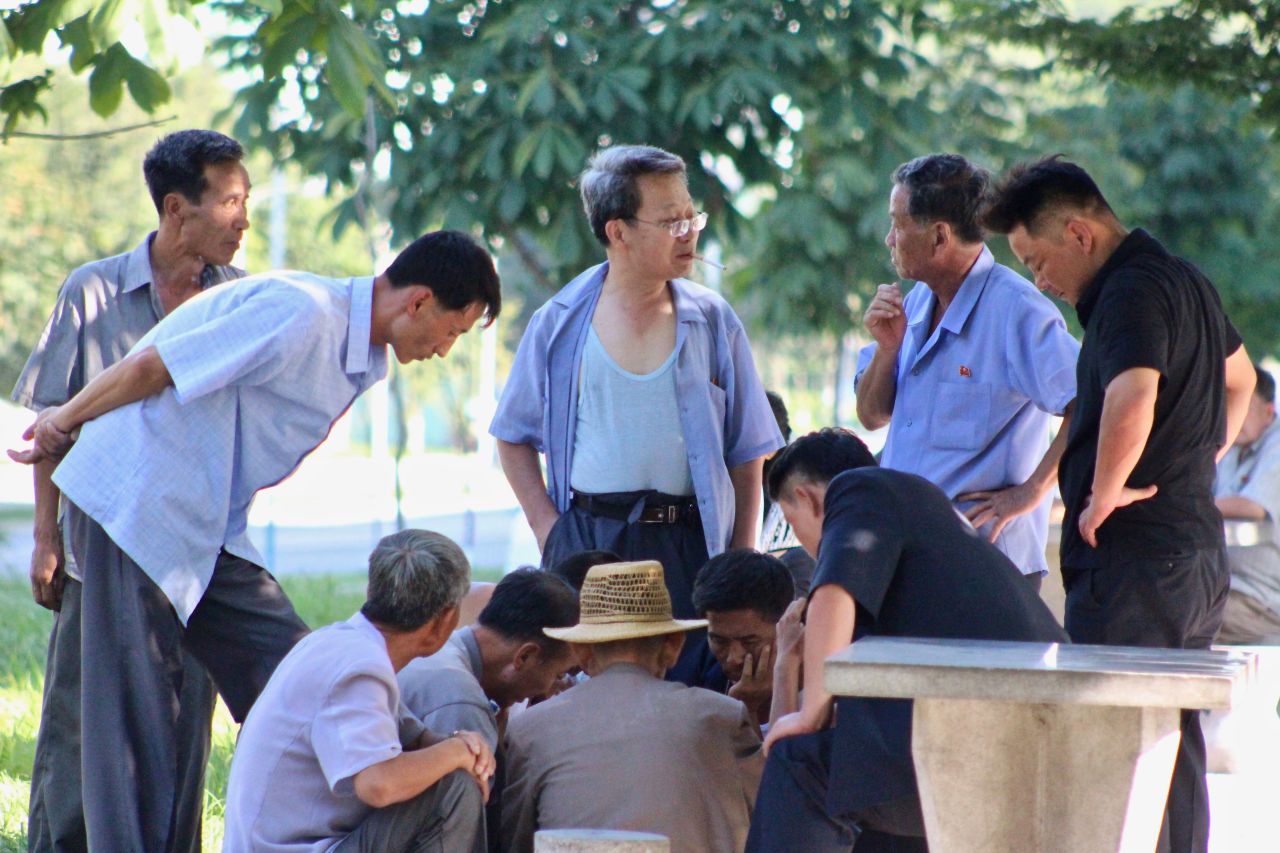 A group plays a board game in Pyongyang in August 2019. (Lindsey Miller)
Miller described a “complex cocktail of emotions” that living in the country that is North Korea entailed. Ultimately, she decided to think of her relationships, however fleeting or casual, as authentic. “I felt like our relationship was genuine,” she said, describing them as “careful friends.”

It is often said that you can hate the system but not the people.

“I have hatred toward the system, but what could I do? I just decided to be kind and treat people as human beings,” she said, explaining how she chose to focus on people. “Politics are a distraction over people.”

In her book, Miller writes, “If I live for a hundred years, it’s unlikely anything will surpass it.” It has also taught an invaluable lesson in life: “Be humble, have humility, you’ll never know everything.”

“The only sure thing is how I’ll feel about them,” she said, speaking about the people she met in North Korea. As she described her departure, she fought tears welling up in her eyes. “Saying goodbye to people was really, really hard,” she said. The sense of finality made the farewells even harder as she saw no possibility of reconnecting ever again.

One parting stands out in her mind. “He wasn’t one for hugs but I gave him a hug and he patted me on the back,” she said.

Miller is often asked if she wants to go back. “I deeply, deeply miss my friends. It is not a simple yes or no,” she said. “The only reason to go back would be to see friends. I think it is highly unlikely.”

As for helping the people of North Korea, she said, “I would love to continue doing what I can of connecting with people. I hope this book resonates with people and opens a small window,” she said.

“I want people to spend time with people in those pictures,” she said.