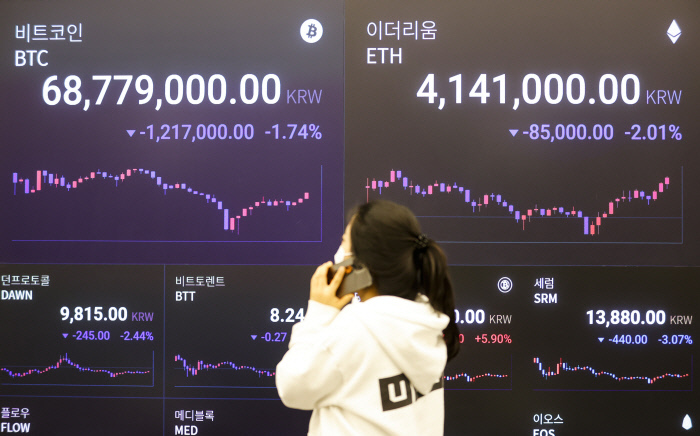 A digital board shows cryptocurrency prices at Upbit`s customer center in Seoul on Tuesday. (Yonhap)

Despite its cautious tone on digital currencies, the Korean government has indirectly invested 50 billion won ($44.4 million) into cryptocurrency-related funds in the past four years, according to data provided by an opposition lawmaker.

According to Rep. Yun Chang-hyun of the People Power Party on Wednesday, five public organizations put a total of 50.21 billion won into funds that invested in cryptocurrency exchanges like Upbit and Bithumb from 2017 to March 2021, with the Ministry of SMEs pouring in the largest amount of 34.3 billion won during the period.

These public organizations also include Korea Development Bank, the National Pension Service, Korea Post and Industrial Bank of Korea, which played a role as liquidity providers in funds of funds -- pooled funds investing in other funds.

Yun said that these investments are contradictory to the government’s skeptical approach to the emerging cryptocurrency industry.

“If investing in digital coins is a ‘gamble,’ how can public institutions explain their investment in crypto exchanges?” Yun said, urging the government to change its perception of virtual currencies to avoid such a contradiction.

Yun was referring to recent remarks made by the country’s top finance officials.

Both Eun Seong-soo, chairman of the financial watchdog Financial Services Commission, and Lee Joo-yeol, the Bank of Korea governor, recently said that digital coins have no intrinsic value. Eun added that cryptocurrencies are highly speculative investments and he does not support the idea that the government needs to protect crypto investors.

“Funds of funds provide liquidity into the market and do not intervene in how venture capital firms manage their funds. It is not illegal to invest in cryptocurrencies,” an MSS official was quoted as saying by local media on Wednesday.

Public organizations are huge contributors to local venture investments, having injected more than 1 trillion won each year since 2019.