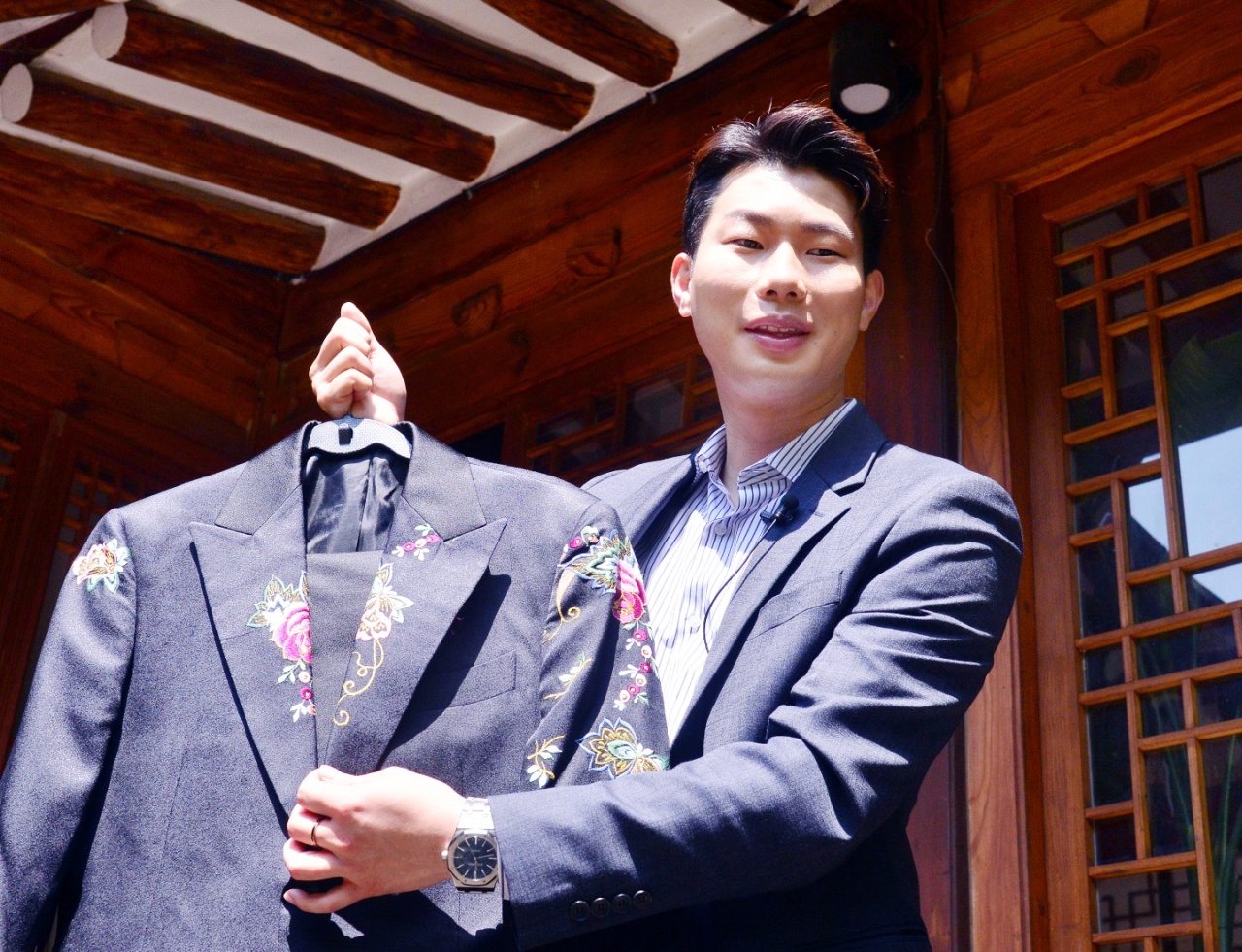 Designer Kim Ri-eul poses with one of his hanbok suits during an interview with The Korea Herald in Seoul. (Park Hyun-koo/The Korea Herald)
When global sensation BTS danced to its 2018 hit “Idol” at an ethereally moonlit Gyeongbokgung in Seoul on NBC’s “The Tonight Show Starring Jimmy Fallon” last September, fans all over the world had their eyes on the seven beloved superstars -- first for their mesmerizing performance and then for their black outfits inspired by Korea’s traditional attire, or hanbok.

Those stylish suits, sleekly embellished with Korean elements, immediately created buzz on social media. Fans soon found out about the young South Korean designer behind the clothes worn by Jimin, Suga and J-Hope -- a designer at the forefront of breaking the barriers of hanbok.

“Back then, over 100,000 fans had watched the show. I was scrolling down through their comments and found out many of them were actually gushing over the members’ outfits. Their conversation naturally flowed from BTS to hanbok, asking what kind of outfits those were. That moment, I could picture a future where hanbok was a casual dinner table topic among foreigners,” said the 28-year-old designer Kim Ri-eul during his recent interview with The Korea Herald in Seoul. Kim, whose real name is Kim Jong-won, is in his sixth year designing modern hanbok outfits under his own brand, “Rieul.”

It was a sunny afternoon at a peaceful Korean traditional-style studio, and it was no coincidence that Kim naturally blended into his surroundings. At first glance, Kim looks like a polished city boy, with his stylishly pulled-back hair, clean-cut gray suit and gentle voice. But the designer was born in Namwon, North Jeolla Province, and grew up in Jeonju, a historic city and cultural center in the same province that is home to Jeonju Hanok Village. Due to his parents’ zeal for education, Kim recalled, he was a studious little boy who won many prizes at school. He also holds several patents. 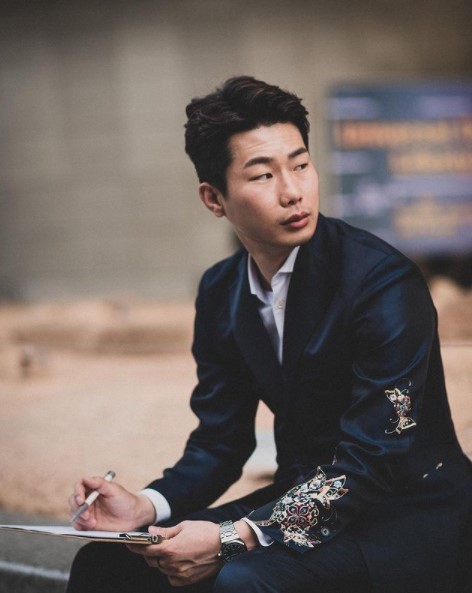 Kim Ri-eul (Kim Ri-eul’s Instagram)
“Growing up in Jeonju, I saw a row of hanbok rental shops springing up at the village frequented by tourists. It’s been less than 20 years since the rental business became a boom. As the market got bigger, problems started to emerge, as many shops started using cheaper Chinese fabrics instead of authentic Korean ones,” Kim said. That is why he felt drawn to the world of hanbok.

Later, when he was traveling in Paris the topic of Jeonju Hanok Village came up and some non-Korean friends told him they had tried on rented hanok on a visit and found the outfits beautiful. One comment bothered him, though: “But you guys don’t wear it daily since it’s uncomfortable, right?”

Having always been creative and savvy, Kim came up with the idea of incorporating hanbok into everyday suits, despite having almost zero background in fashion. In fact, as a kid, he was a soccer enthusiast whose closet was rife with casual sportswear.

“Back then when I started the business, there was no such thing as hanbok suits. I got rejected by almost all hanbok makers and factories, not only because it was labor-intensive work, but also the texture of hanbok is really tough to handle,” he explained.

The fashion market, unreceptive to Kim’s idea, was an uphill battle. But he was willing to tackle it.

It took him six months to tailor his very first hanbok suit, but Kim was fortunate to find support from hanbok masters, business mentors and foreign friends who cordially modeled his creations. The photos, which earned over 20,000 likes within a week on Instagram, drove him to stardom.

“If making money was my goal, I would have made hanbok with low-priced Chinese fabric and sold it in large quantities. But I didn’t want the value of hanbok to be harmed. I felt some kind of responsibility and decided to pave a way by launching a big-name hanbok brand that could represent Korea.” 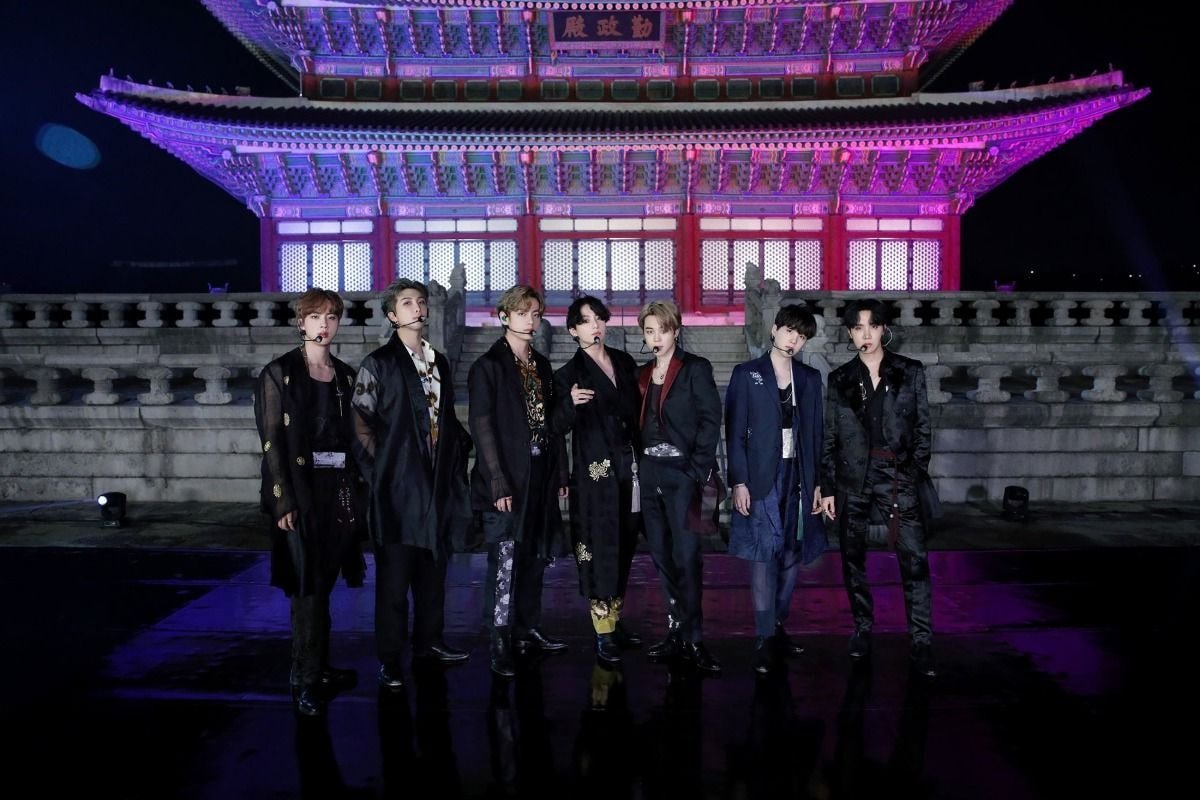 BTS (Jimmy Fallon Show)
He went on to start his own brand, “Rieul,” which he named after the fourth character in the Korean alphabet, Hangeul. Since a rieul resembles the number two, Kim thought it might be a clever way to start a conversation about Hangeul, hanbok and Korea.

Kim soon became one of the most sought-after names among local designers and celebrities thanks to his artistry and vision. He has dressed stars like Tiger JK, Zico, Monsta X and volleyball star Kim Yeon-kyung, to name a few. And Kim’s desire to promote hanbok was more important than commercial success -- he made all of the attire at his own expense and lent it to the stars for free.

In 2018, his career hit a new high when Big Hit Entertainment reached out to him ahead of BTS’ historic gig at the palace. Keeping up the winning streak, Kim appeared in Samsung’s “Fashion Stage” advertisement for the Galaxy S21 in January this year. More recently he held an event at the Dongdaemun Design Plaza in central Seoul, where the suits worn by Suga and J-Hope during their “Idol” gig are still on display.

Asked about his motif as a designer, Kim said, “I define myself as a planner with many ideas. For me, to design is to view the world with my point of view and to express it in my own way.

“I always ask people to define hanbok in their own terms, but very few of them were able to give answers. As a designer, I’ve also made my own definitions. I believe the true beauty of hanbok comes with its unique line and fabric, and I will keep elevating their values and make it a part of our culture. I call it ‘dressing hanbok on top of culture,’” he said.

Even now, Kim’s head is brimming with innovative ideas. Recently, he’s been working closely with ambassadors from over 20 countries. Some of the projects include making tailored hanbok suits and adding traditional touches to wedding gowns for people in different countries. Kim’s vision encompasses diverse possibilities for hanbok, such as tennis skirts, leather jackets and even sweatshirts.

“If I’d jumped into the rental business just like others, I can proudly say that this kind of world, where hanbok becomes culture, wouldn’t have come. And I feel honored and lucky to have taken the helm. I am breaking the barriers of hanbok,” he said.

Perhaps his ardor for soccer played a part in his success. Kim said he hoped his next muse would be Son Heung-min of Tottenham Hotspur.

“In the past, I’ve always said my next goal is to dress G-Dragon, but that dream has already been realized. My next goal is to work with Adidas and deliver a pair of special soccer shoes to Son. It’s in the works now,” said Kim, shyly hinting at what’s next.