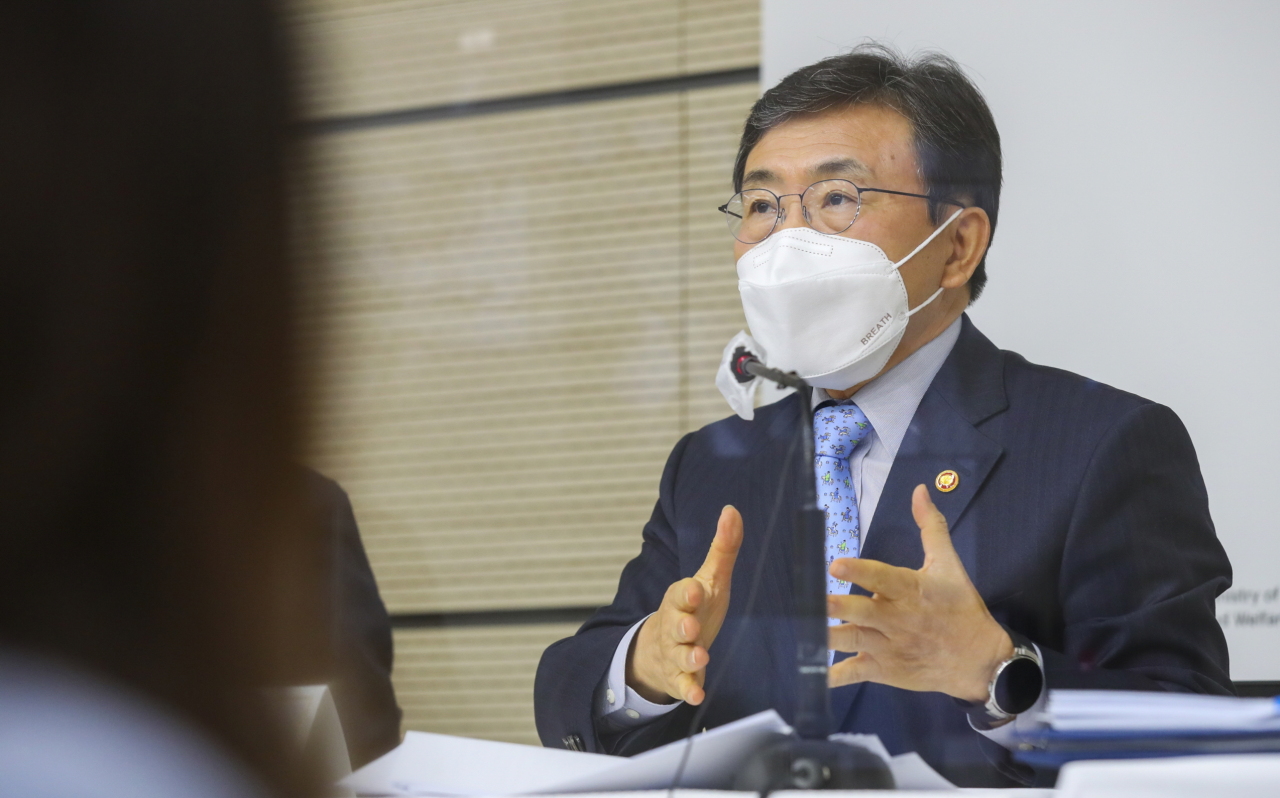 SEJONG -- South Korea is not considering using Chinese COVID-19 vaccines, according to the minister of health and welfare on Thursday.

Kwon Deok-cheol, who assumed the ministerial post at the peak of the winter wave in mid-December, told a socially distanced press conference that while the country is striving to secure more vaccines, those made by Chinese companies Sinovac and Sinopharm are not among the options being considered.

“We’re working to ensure our goal of herd immunity will be met before the year is over, and the delays in vaccine distribution are one of the biggest threats that can undercut such efforts,” he said.

As the government suspends giving the AstraZeneca vaccine to people younger than 60 years of age, the minister continued to stand by its safety and efficacy. The decision was reached in “an abundance of precaution,” he said.

“I myself, as well as the prime minister, took the vaccine. I did not have any notable side effects other than the expected kinds,” he said. ”Although there have been a few blood-clotting events in people who had the vaccine, it remains unclear if the vaccine played a role.”

Following the discovery of a second case of blood clots in a 20-something recipient of the AstraZeneca vaccine, Korea said it would limit its use to older groups only, in an emergency announcement Wednesday evening.

The latest blood clot case involved a medical worker in her 20s who came down with a pulmonary embolism, or blockage of an artery in the lungs. Her initial symptoms were sudden breathlessness and chest pain that began 12 days after getting a first dose of the vaccine.

Another case was a paramedic in his 20s diagnosed with a rare clotting condition in the brain called cerebral venous sinus thrombosis in less than two weeks since receiving the vaccine. He suffered from a headache that persisted beyond the third day after his vaccination.

Neither had preexisting health problems, and health authorities don’t know what triggered the conditions.

The newly imposed AstraZeneca restrictions are expected to strike a blow to the country’s mass vaccination campaign that kicked off in late February with vaccines from two companies -- 1.5 million doses of AstraZeneca’s and 117,000 doses from Pfizer.

The Moon Jae-in administration has repeatedly vowed that more than 12 million Koreans would be inoculated with at least a single shot by the end of June. So far the official count stands at 1.07 million.

The minister said he believes the goal remains viable, even with the AstraZeneca woes. He said additional vaccines were set to arrive before summer, without disclosing precisely when and how many doses. He said that the government was speaking with the vaccine makers to see that the delivery deadlines are kept.

“We will definitely have more from AstraZeneca in the remainder of the second quarter, and Pfizer and Novavax also said they would be delivering as scheduled,” he said. As AstraZeneca and Novavax vaccines can be manufactured at home, there were fewer hurdles to accessing their supplies, he added.

As for the earlier talks of halting exports of AstraZeneca vaccine made here, he refuted the prospects of such a move. “What we said is that we are open to all possibilities,” he said.

Faced with a looming risk of shortages, the government launched a special task force on April 1 to improve vaccine supply. The task force said it aims to pursue new deals with companies like Pfizer and Moderna where possible, and hasten the arrival of batches already ordered.

The minister said he was making the vaccination program’s success his top priority.

“But even countries with speedy vaccination drives are hit by new surges in infections as they ease out of mitigation measures,” he said. “Social distancing and vaccinations should go hand in hand.”

Korea is looking to reverse the decision to withhold the vaccine for younger populations through subsequent assessments, the Korea Disease Control and Prevention Agency said in a press briefing the same day.

“It is the opinion of the regulators here and elsewhere that the benefits of vaccinations still outweigh the rare risks,” the agency said. The agency is holding a meeting this week to decide whether to lift the restrictions on AstraZeneca vaccinations.

These comments come as the European Medicines Agency acknowledged the AstraZeneca vaccine’s possible link to the rare form of blood clots. The European Union regulator said the rare blood clots should be listed as a very rare side effect of the vaccine.