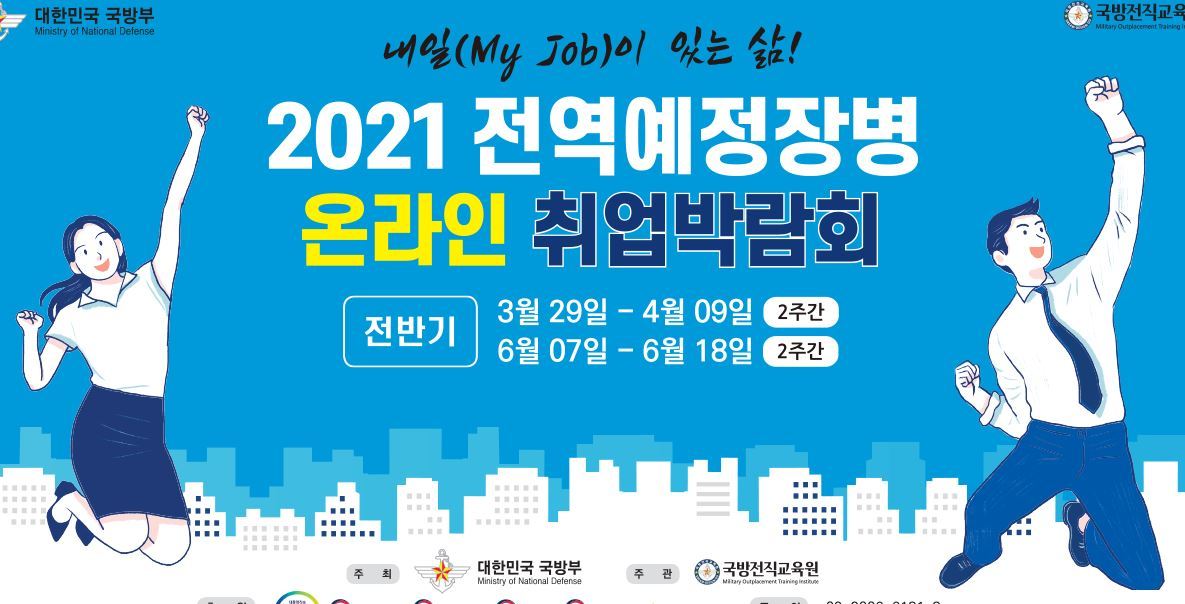 A capture of the pamphlet for an online job fair, hosted by the Ministry of National Defense, for those, who will be discharged from military service in the coming weeks. (Defense Ministry of Korea)
SEJONG -- The percentage of nonregular workers in South Korea was found to have climbed steepest among women aged 20-29, state data shows.

In the figures for nonregular jobs, held by Statistics Korea, The Korea Herald compared the eight “core” working-age groups -- men and women in their 20s, 30s, 40s and 50s. The other four, men and women aged 15-19 and those in their 60s or over, were excluded.

As of August 2020, the number of nonregular workers, including those in temporary or contract jobs, among women in their 20s came to 690,000 of the total 1.77 million salaried workers in the same group, with the portion of 38.9 percent.

This was a 5.5 percentage point increase from three years earlier in August 2017, when the figure was 33.4 percent. The nation makes public the relevant figures once in a year, based on every August data.

The growth among women in their 20s far outstripped figures for other age and gender groups. 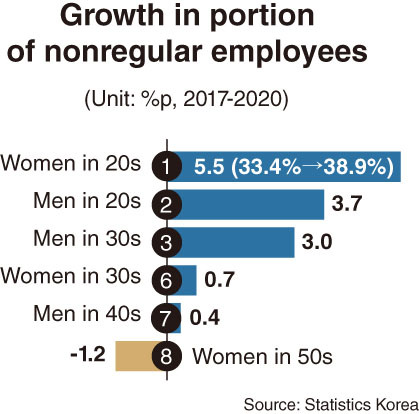 (Graphic by Kim Sun-young/The Korea Herald)
Male workers in their 20s ranked second as the proportion of them in nonregular jobs rose by 3.7 percentage points from 32.6 percent to 36.3 percent -- 592,000 of the total 1.62 million salaried employees in the same group -- over the corresponding period.

This indicates that college or high school graduates have suffered a tighter job market amid a prolonged economic slowdown since the late 2010s and the COVID-19 pandemic. Further, young women still face discrimination in hiring at a large portion of businesses.

But the 1.97 million female workers in their 50s were still the most likely to be in nonregular employment among the eight core groups as of August 2020 -- 44.1 percent (871,000) of them were nonregular workers.

Statistics Korea data showed that 45.03 percent of all 9.08 million female workers, including those aged 15-19 and those in their 60s or over, were in nonregular positions as of August 2020.

The figure was the highest since the nation started compiling the relevant data in 2003, renewing the former all-time high of 45.01 percent in August 2019.

The portion of nonregular jobs among the female workers ranged between 39.9 percent and 41.1 percent during the previous Park Geun-hye administration (February 2013-March 2017).

Meanwhile, some government officials argued that the sharp growth in the number of nonregular jobs in 2019 could be attributable to re-classification of about 350,000-500,000 workers as nonregular employees in accordance with new global labor standards.