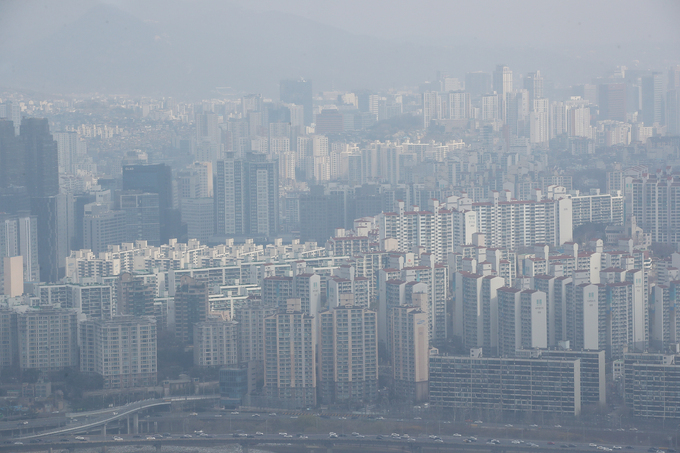 This photo, taken March 21, 2021, shows apartment buildings in Seoul. (Yonhap)
SEJONG -- The government will make efforts to revise a set of laws this year to help root out real estate speculation, Finance Minister Hong Nam-ki said Thursday, amid growing public criticism over allegations of property speculation by officials at the state-run housing corporation.

Hong said the government will have close consultations with the National Assembly to submit 19 revision bills this month that eventually ban public officials from doing illegal property speculation.

Of the 19 bills, five bills were already submitted to the National Assembly, Hong said.

The government will also step up efforts to increase housing affordability for low-income people, Hong said.

Police are widening their probe into allegations of land speculation by employees of the Korea Land and Housing Corp. (LH).

The LH scandal erupted in early March after two civic groups accused 14 LH officials of using insider information to buy farmland in two satellite cites south of Seoul between April 2018 and June 2020, before they were formally designated as development sites.

The allegations have rocked the nation at a time when public discontent over skyrocketing home prices runs high.

Despite the snowballing scandal, the government made clear that it will push ahead with its massive housing supply plan unveiled in February.

Last month, the government unveiled a plan to increase the number of new homes by up to 836,000 nationwide in the next four years in a bid to help stabilize rising housing prices. (Yonhap)