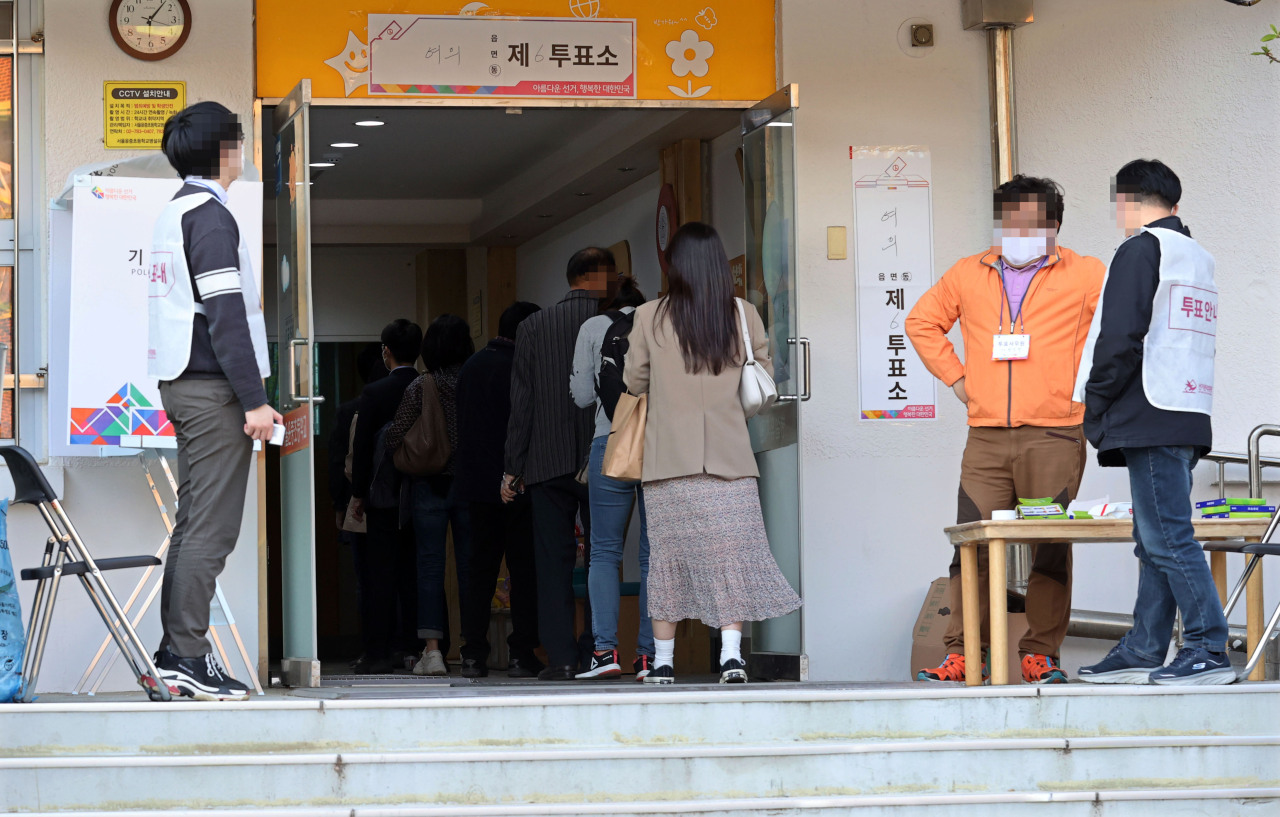 Seoul citizens line up to vote Wednesday by a poll booth installed at an elementary school in Yeongdeungpo-gu, western Seoul. (Yonhap)
Some 6.45 million voters rushed to polling stations Wednesday to cast their ballots for the mayor of Seoul and Busan, the two largest municipalities in South Korea.

According to preliminary data from the National Election Commission, 56.8 percent of 12.16 million eligible voters cast their votes during the two-day-long early voting period and from 6 a.m. to 8 p.m. on the day of the election.

Some 58.2 percent of 8.43 million eligible voters cast their ballots to choose the next mayor of Seoul. The voter turnout reached 52.7 percent, or 1.55 million votes, out of 2.94 million registered voters in Busan.

Voting ran from 6 a.m. to 8 p.m. Wednesday at 3,459 polling stations across the country for voters to cast their ballots for two mayoral posts and 19 other regional public positions. Early voting ran from Friday to Saturday, with advance voting turnout reaching a record-high of 20.54 percent.

It has already been estimated that the final voter turnout will surpass 50 percent for Wednesday’s by-elections as the result of increased public interest in the two-way battle between those wishing to keep the ruling camp in power and those wanting to challenge the ruling party for mismanagement.

The election has also drawn large public interest as it could serve as a prologue for the presidential race slated for next year. Analysts have estimated that higher voter turnout will work in favor of conservative party candidates in both cities.

Park Young-sun of the ruling Democratic Party of Korea competed against former Seoul Mayor Oh Se-hoon of the main opposition People Power Party in effectively a two-way race for the Seoul mayoral seat. The Seoul mayoral race’s voter turnout was slightly lower than the 59.9 percent reached during the last mayoral election in 2018.

The Seoul race was highlighted by a surprisingly large turnout from Gangnam-gu, Seocho-gu and Songpa-gu, the three traditionally wealthy and right-learning districts in southern Seoul.

Seocho-gu recorded the highest voter turnout of 64.0 percent, followed by Gangnam-gu with 61.1 percent and Songpa-gu with 61.0 percent.

Many within the political world speculated that the turnout was high in the three districts because residents there were eager to voice their anger towards the Moon Jae-in administration, especially due to its real estate policies.

Those leading the votes in these four districts achieved victory in the past seven Seoul mayoral elections. Geumcheon-gu saw the lowest voter turnout in the capital, with 52.2 percent.

As the election was held during a weekday, voter turnout fell slightly lower than previous years in Busan, a traditional safe haven for conservatives over the years.

Kim Young-choon of the ruling camp was up against Park Heong-joon of the main opposition party for the Busan mayoral race.

Voter turnout reached 58.8 percent for the Busan mayoral post in 2018, but turnout Wednesday reached just under 53 percent. The lower voter turnout was also accredited to increased COVID-19 concerns in the city, where Level 2 social distancing rules are currently in place.

It was observed that the turnout rate was high enough even considering these two factors. Many analysts speculated that a higher voter turnout would translate to greater support for the conservative party candidate.

The mayoral post for the second-largest municipality in Korea has largely been dominated by candidates from the conservative side, until the post was taken over by Oh Keo-don of the ruling Democratic Party in 2018.

As poll results largely swayed to a single party in past mayoral elections, no district can be effectively viewed with greater importance or considered a “swing district.”