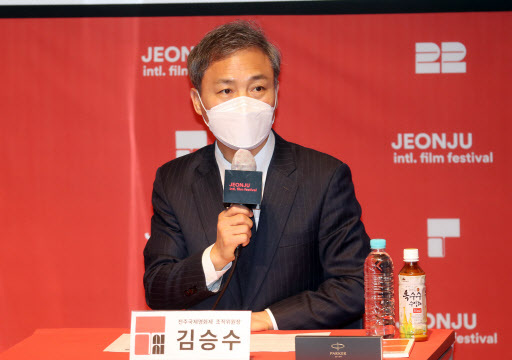 Jeonju Mayor Kim Seung-su speaks during a press conference ahead of the Jeonju International Film Festival at the Jeonju Digital Independent Cinema in Jeonju, North Jeolla Province, Tuesday. (Yonhap)
JEONJU, North Jeolla Province -- The pandemic and female directors are the focus of this year’s Jeonju International Film Festival, which announced its lineup at a press conference at the Jeonju Digital Independent Cinema on Tuesday.

Under the slogan “Film Goes On,” the 22nd Jeonju International Film Festival will be a hybrid event screening 186 movies -- 116 features and 70 shorts -- from 48 countries. A total of 45 films are competing in the international competition, the Korean competition and the competition for Korean shorts. Ten films from Asia are competing for the NETPAC Award. There will be 68 world premieres and eight international premieres.

“Last year’s festival was influenced severely by COVID-19. This year, we will provide administrative support so that the festival can be creative while complying with the social distancing guidelines,” Jeonju Mayor Kim Seung-su, who is also the director of the Jeonju International Film Festival organizing committee, said during the press conference. 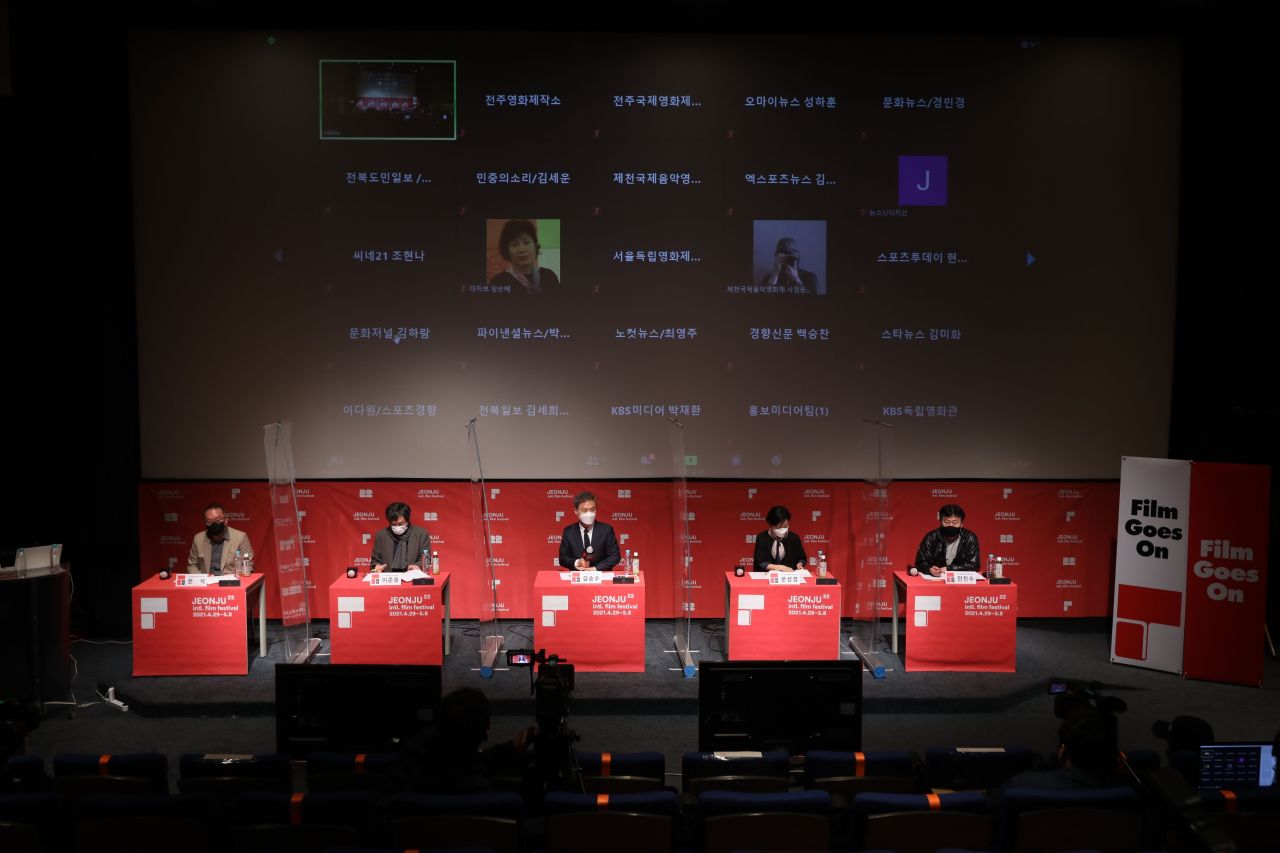 A press conference is held ahead of the Jeonju International Film Festival at the Jeonju Digital Independent Cinema in Jeonju, North Jeolla Province, Tuesday. (JIFF)
While last year’s extended hybrid festival ran for 114 days as the organizers responded to the changing pandemic situation, this year the festival will run for 10 days, from April 29 to May 8.

“This year we will screen 141 movies through the online platform Wavve, which account for 75.8 percent of the movies that are being screened this year,” festival co-programmer Chun Jin-su said. Forty-five films will be screened at four theaters in Jeonju.

“Father,” directed by Srdan Golubovic, will open the festival. The film depicts the story of Nikola, a father of two in Serbia. After Nikola’s wife sets herself on fire due to poverty and hunger, he is told by the social services center that until he can provide adequate conditions for the children, they must be separated and placed in foster care. Although Nikola makes several appeals, the head of the social services center refuses to return his children to him.

“The opening film is about an inadequate social safety net in modern society,” Chun said.

This year’s closing film is the animation “Josep,” directed by Aurel, which tells a fictional story based on the life of Spanish illustrator Josep Bartoli (1910-1995).

In addition to the international and Korean competition sections, a new special section titled “Special Focus: Corona, New Normal” was created this year. Films in this section reflect the current pandemic situation.

“We are still in the middle of COVID-19 risk. We thought that many directors would have reflected the current state in their works and created the section,” festival co-programmer Moon Seok said. “To be completely honest, there were not many Korean feature films that deal with this topic. There were many short films, however.”

Six Korean short films about COVID-19 will be screened in this new section.

The number of outstanding female film directors is increasing, the festival organizers said.

“Around 41 percent of the films selected (for the festival) are by female directors. We see this trend as being due to more audiences willing to listen to stories that have not been heard before. And it also reflects changes in the filmmaking environment,” festival co-programmer Moon Sung-kyung said.

The programmers also highlighted “Companions” -- a documentary film directed by Ada Frontini that focuses on the love between people and dogs.

“We are planning to screen this film outdoors at the plaza in front of Jeonju City Hall so that the audience can enjoy it with their dogs,” Chun said.

He added that social distancing guidelines will be followed strictly even for outdoor screenings.

Tickets for online screenings are 5,000 won for features and 1,500 won for shorts on Wavve. Online viewing is only possible within South Korea.