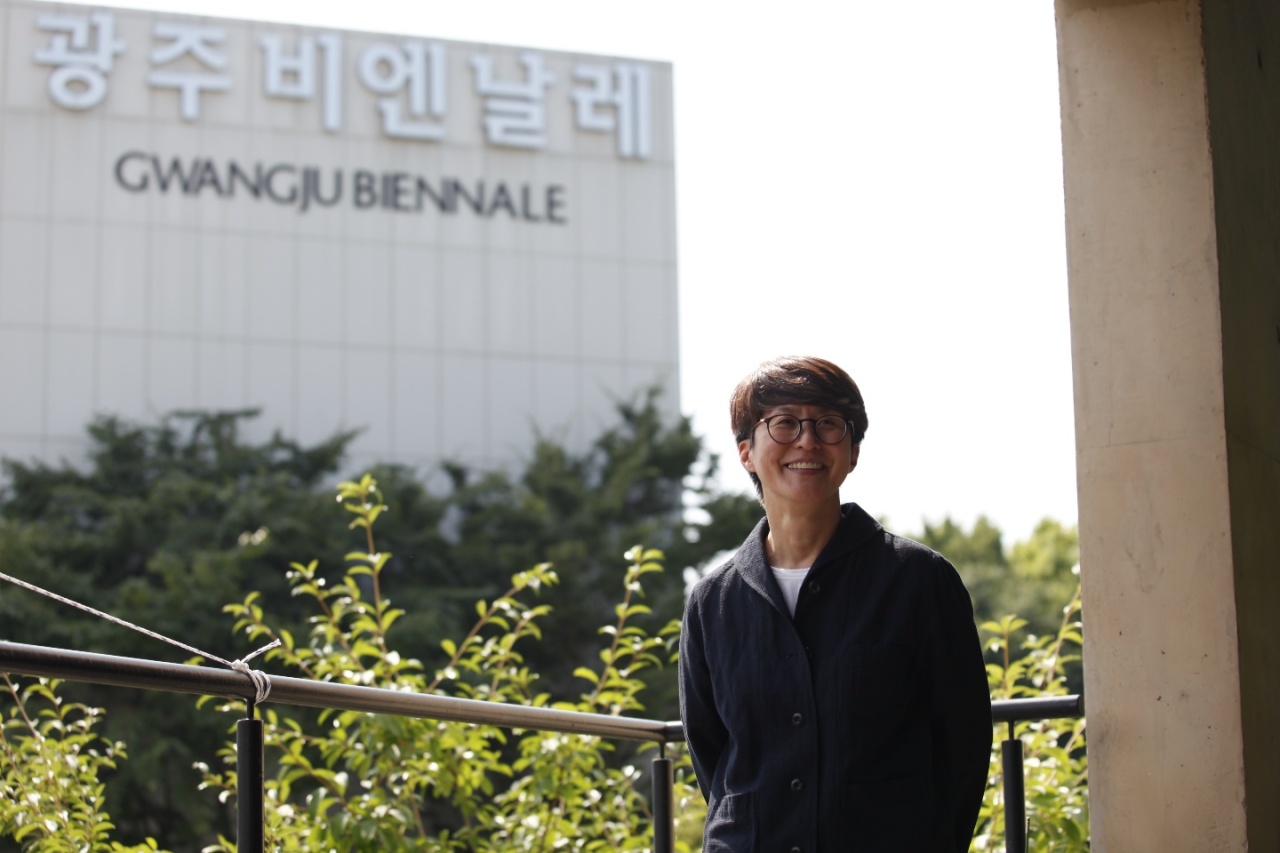 “I thought it was inconvenient for visitors to purchase tickets and wait outside so I suggested using Exhibition Hall 1 as a meeting place as well as a place to appreciate the artworks,” said Kim Sun-jung, president of the Gwangju Biennale Foundation, during an interview with The Korea Herald on opening day, Thursday.

“Rising Together,” a show named after one of the subthemes of the biennale, is on the first floor of the Gwangju Biennale Exhibition Hall. The biennale runs through May 9, and the event’s theme is “Minds Rising, Spirits Tuning.”

Kim, who assumed the foundation’s presidency in 2017, is a well-recognized curator, having served as a co-artistic director of the Gwangju Biennale in 2012 and as commissioner of the Korean Pavilion at the 2005 Venice Biennale. As president she was also chief curator of the previous biennale in 2018.

When she became the foundation’s president, she brought a new vision for the Gwangju Biennale as Asia’s oldest large-scale biennale. While the biennale has been a one-time event for the past 10 years, Kim wanted the event to be more enduring and impact the community in a meaningful way.

“Since I came on board as president, I have pondered on the new form of biennale and how it should be in the future. But it was never easy,” Kim said. “The GB Commission and the Pavilion Project are being held along with the main biennale exhibition.”

While the GB Commission invites artists to create site-specific works in Gwangju inspired by the city’s history, the Pavilion Project aims to foster cooperation between local and overseas institutions to produce collaborative exhibitions.

“For example, the exhibition ‘Between the Seen and the Spoken,’ which is part of the GB Commission, aims to promote local artists in Gwangju, giving them a chance to show their works if they cannot be shown at the main biennale exhibition. I explored the artists’ studios and it was a long process to bring all these together at the biennale,” Kim added.

The core value of the Gwangju Biennale, which was established in 1995, lies in the city’s fight for democracy and peace in 1980 against the military strongman Chun Doo-hwan, who came to power in a military coup in December 1979.

“Some young people say they are tired of hearing about the Gwangju Democratization Movement and the movement being mentioned in the Gwangju Biennale. But the spirit of freedom and democracy is the backbone of the birth of the biennale,” Kim said.

“If we call that spirit the root of the biennale, how would it survive without the root?”