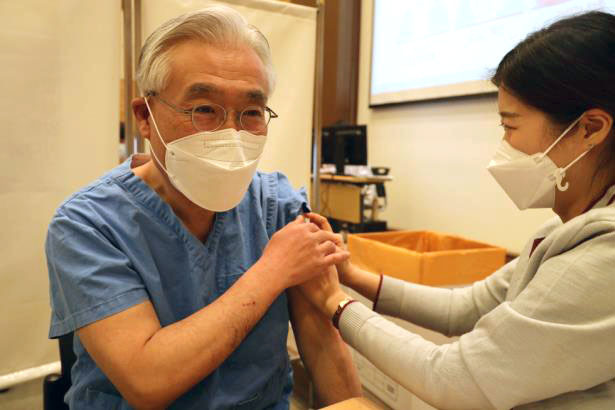 A doctor at a Seoul hospital receives an AstraZeneca shot on March 9. (Yonhap)

The agency’s Commissioner Jung Eun-kyeong told lawmakers on Wednesday morning that medical examiners found clots in the organs of a deceased vaccine recipient in her early 60s last week. Her autopsy was performed on March 8.

Until a day earlier on Tuesday, the agency had insisted there were no such cases in Korea in daily press briefings when asked by reporters, after dozens of reports of blood clots among AstraZeneca vaccine recipients had surfaced in Europe.

In October last year, the Ministry of Food and Drug Safety came under heat for not coming clean on contamination in flu vaccines immediately.

The parliamentary committee for health and welfare said during an audit that although the Drug Safety Ministry was aware of the issues with the vaccines as early as Oct. 6, it did not take any action until Oct. 9. As a result, the potentially problematic vaccines were given to more than 60,000 people over the four days.

“Withholding such information from public knowledge is going to send the wrong signals,” Kim said. “It tells the public the authorities are trying to cover something up.”

At the time, experts had called for timely and transparent communications from the authorities.

“The government should move quickly to investigate and provide information and assurance of vaccine safety -- assuming nothing is found.”

Health authorities on Thursday afternoon confirmed they had received a second case of blood clots following an earlier press report. A first responder in his 20s, who was inoculated with the AstraZeneca vaccine on March 10, was diagnosed with blood clots on March 15, authorities said.

So far no link has been found between the vaccines and the two reports.

As of Wednesday at midnight, 641,331 people in Korea have received the first of the two-dose COVID-19 vaccines -- 598,353 for the AstraZeneca vaccine and the rest with Pfizer’s.

Although health officials said Tuesday the AstraZeneca rollout here might be stopped depending on the results of the European Medicines Agency probe, which are to be announced sometime Thursday, it’s highly unlikely its recommendation would change, according to Dr. Paik Soon-young.

Paik, a virology professor at the Catholic University of Korea, said the likelihood of the European Union regulator finding anything to warrant suspensions of the AstraZeneca vaccine was “almost certainly zero.”

“Experts at the EMA, as well as those at the WHO, have made it very clear there is no indication that the vaccine increases the risk of blood clots,” he said.

“The countries that have temporarily stalled the vaccine’s use are ones that have stocks of vaccines from other brands. Pausing the jab is not going to affect their immunization efforts significantly,” he said. “But most of our current supplies are from AstraZeneca, so any suspension is going to be detrimental for us.”