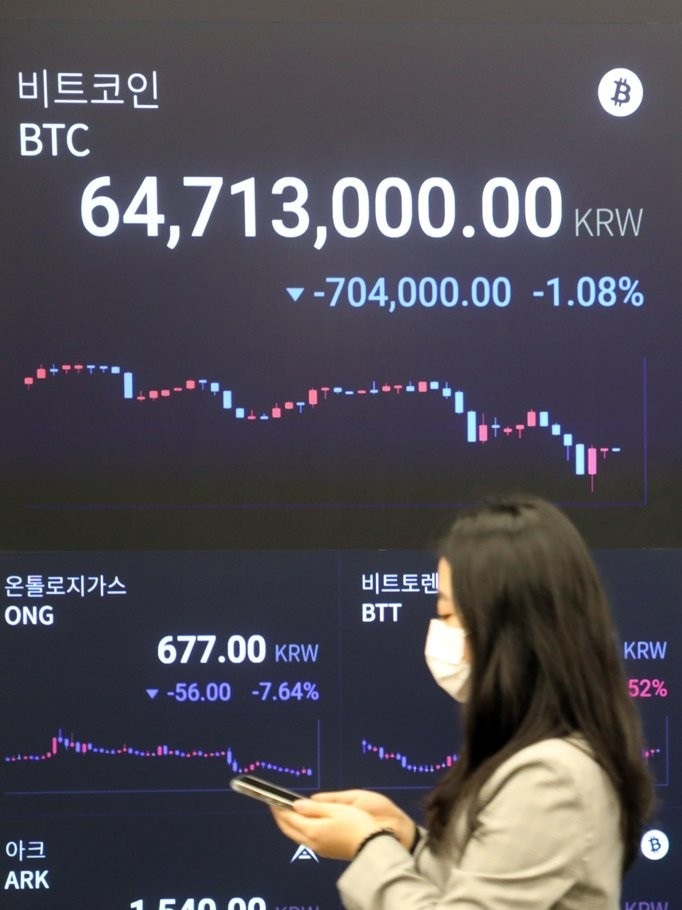 The electronic board of a cryptocurrency exchange in Seoul shows the price of bitcoin during a trading session on Feb. 22, 2021. (Yonhap)
Continuing its formidable rally, Bitcoin, the world’s largest cryptocurrency, surpassed the 70 million won ($61,593) mark for the first time on Sunday.

The value of a single bitcoin reached an all-time high of 71.45 million won on the day, according to local cryptocurrency exchange Upbit.

The crypto coin has also reached a record high on other crypto trading platforms here and abroad. It topped 71.2 million won on Bithumb and 71.02 million on Coinone while surpassing $60,000 on US crypto exchange Coinbase.

Bitcoin prices vary from exchange to exchange because of differences in trading volume, among other reasons.

Despite market skepticism and its highly volatile nature, the digital coin has been soaring in value since late last year.

Bitcoin bounced back to a high of 65.42 million won on Feb. 22, before going through bouts of fluctuations until March 6. Since then, it has gone on an upward trajectory.

Investor sentiment, as well as bitcoin prices, have been affected by comments made by politicians and high-profile entrepreneurs. News of institutional investors or companies jumping into the crypto market have fueled the Bitcoin’s rally.

In a media interview on Feb. 22, US Treasury Secretary Janet Yellen said Bitcoin was “an extremely inefficient way of conducting transactions, and the amount of energy that is consumed in processing those transactions is staggering.”

Electric car maker Tesla said on Feb. 8 that it had bought $1.5 billion worth of bitcoin while Twitter CEO Jack Dorsey has recently announced his plan to sell his very first tweet -- posted March 21, 2006 -- in the form of a nonfungible token, a type of cryptographic token.

With the surging value of the digital asset, the entire trading volume of digital currencies has exceeded the entire stock transactions on the nation’s main-bourse Kospi.

Digital coin transactions on the nation’s four major exchanges, including Upbit and Bithumb, for the past 24 hours until 3 a.m. on Sunday, came in at 16.69 trillion won. It was higher than Kospi’s average daily trading volume of 16.05 trillion won marked during this month’s trading days, according to CoinMarketCap, a virtual asset research firm. The average daily transactions on the secondary Kosdaq stood at 11.4 trillion won.

Investors are said to have been betting on digital assets in a bid to hedge against inflationary risks stemming from large-scale monetary easing.