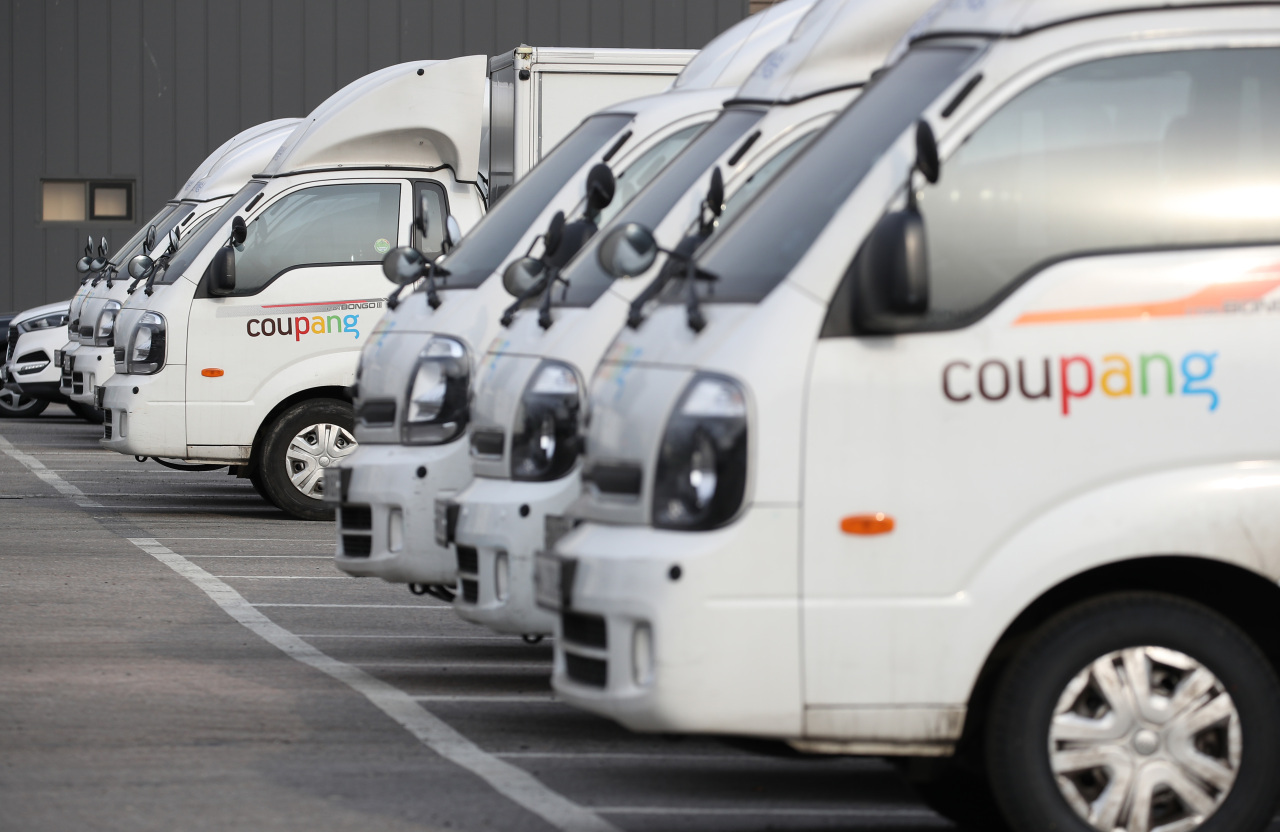 Coupang trucks are parked in a lot in Seoul. (Yonhap)
Coupang Inc. looks to raise as much as $3.6 billion in fresh funds via an initial public offering, which would likely be among the largest deals in the US market this year.

In a regulatory filing submitted to the US Securities and Exchange Commission on Monday there, Coupang Inc. said it plans to offer 120 million shares -- 100 million new Class A shares in the IPO and 20 million shares to existing investors -- in a price band between $27 and $30.

The firm will consist of two classes of common stocks, with each Class A share entitled to one voting right and Class B shares with 29 voting rights given to a total of 12 people, including its founder and CEO Kim Bom-seok, and directors and executive officers, the S-1 filing showed.

The SoftBank Vision Fund will own about 36.8 percent of the company’s Class A shares after the offering. Led by Japanese billionaire Masayoshi Son, the SVF invested $2 billion into the firm in 2018, after SoftBank Group’s prior investment of $1 billion in 2015. BlackRock and Greenoaks Capital are also among the online retailer’s investors.

In line with Coupang Inc.’s listing attempt, media outlets outside of Korea have headlined it as “the fourth-biggest listing on record by an Asian company on the US exchange” or “the largest IPO by a foreign company since Alibaba Group in 2014.”

Coupang Corp., which operates the largest e-commerce business in Korea, is a wholly-owned subsidiary of the Delaware-based Coupang Inc. The parent company submitted its initial S-1 filing, a regulatory form used by domestic entities, to the SEC last month.

Most local brokerage houses have evaluated Coupang Inc.’s price-sales ratio -- a valuation metric for stocks -- at around 1.8-3.1 times. A lower PSR indicates a company is undervalued. Compared to other global e-commerce firms such as eBay (3.6 times) and Alibaba (6.6 times), the firm’s valuation is somewhat lower, they explained.

Although Coupang Inc. may attract investors with its relatively lower price valuation, it still faces a bumpy road to a market debut, one local analyst told The Korea Herald on condition of anonymity.

“We need to wait and see how the rest of the listing process goes, but the surging US bond yields and the fear of volatility that applies to global markets will likely be a burden for the IPO,” the expert said.

“Our Korean subsidiary, Coupang Corp., and a group of companies affiliated with it are likely to be designated as a business group subject to disclosure under the Korean Monopoly Regulation and Fair Trade Act. As described in greater detail in the section titled ‘Government Regulation -- The Monopoly Regulation and Fair Trade Act,’ such a designation would impose additional corporate governance and public disclosure requirements on this group of affiliated companies,” the document read.

“These requirements would create additional costs of compliance and could subject this group of affiliated companies to greater regulatory scrutiny and risk of penalties for any failure to comply with the additional obligations imposed.”

Goldman Sachs, Allen & Co, JP Morgan and Citigroup serve as the lead underwriters, with HSBC, Deutsche Bank Securities, UBS Investment Bank, Mizuho Securities and CLSA participating in the IPO as members of the underwriter group. Bank of America, which was previously included as one of the underwriters in last month’s registration document, was not mentioned in the recent filing.