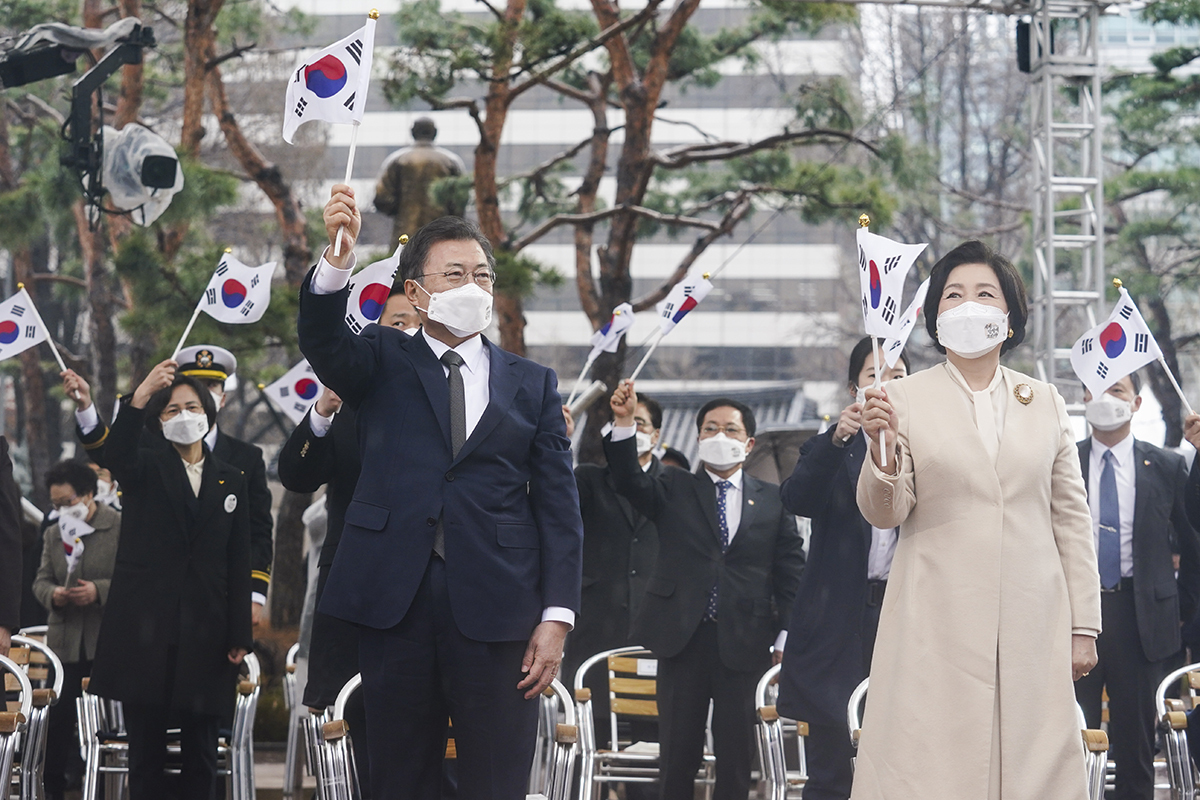 President Moon Jae-in and first lady Kim Jung-sook wave the Korean flag at a ceremony marking the 102nd anniversary of the March 1 Independence Movement in Seoul on Monday. (Cheong Wa Dae)
President Moon Jae-in on Monday reaffirmed his willingness to mend ties with Japan long strained over wartime history and trade, saying issues of the past should not drag down the forward-looking cooperation between the two neighbors.

“Our government is ready to sit down and have talks with the Japanese government anytime,” he said in his speech at a ceremony marking the 102nd anniversary of the March 1 Independence Movement.

“I am confident that if we put our heads together in the spirit of trying to understand each other’s perspectives, we will also be able to wisely resolve issues of the past.”

Moon reiterated the Korean government’s long-held “victim-centered” approach in dealing with historic issues, pledging efforts to recover the honor and dignity of the survivors.

But he stressed issues of the past should be addressed separately from future-oriented development of the bilateral relations. Unlike previous years, he didn’t comment on specific issues like Japan’s wartime sexual slavery of Korean women.

“The only obstacle we have to overcome is that, sometimes, issues of the past cannot be separated from those of the future but are intermingled with each other. This has impeded forward-looking development,” he said.

“We should learn a lesson by squarely facing the past. It is by no means shameful to learn a lesson from past wrongs, but it is rather a way to gain respect from the international community.”

Moon’s March 1 speech, commemorating the months of popular uprising against Japan’s colonial rule (1910-45), which started in Seoul on March 1, 1919, usually involved a harsh criticism of Japan’s atrocities and its mishandling of outstanding issues such as the “comfort women” issue and its claims to Dokdo islets.

This year, the president toned down his criticism overall and focused on dialogue and cooperation in what appears to be part of Seoul’s budding efforts to improve the bilateral ties that have been at one of the lowest ebbs over the past years. 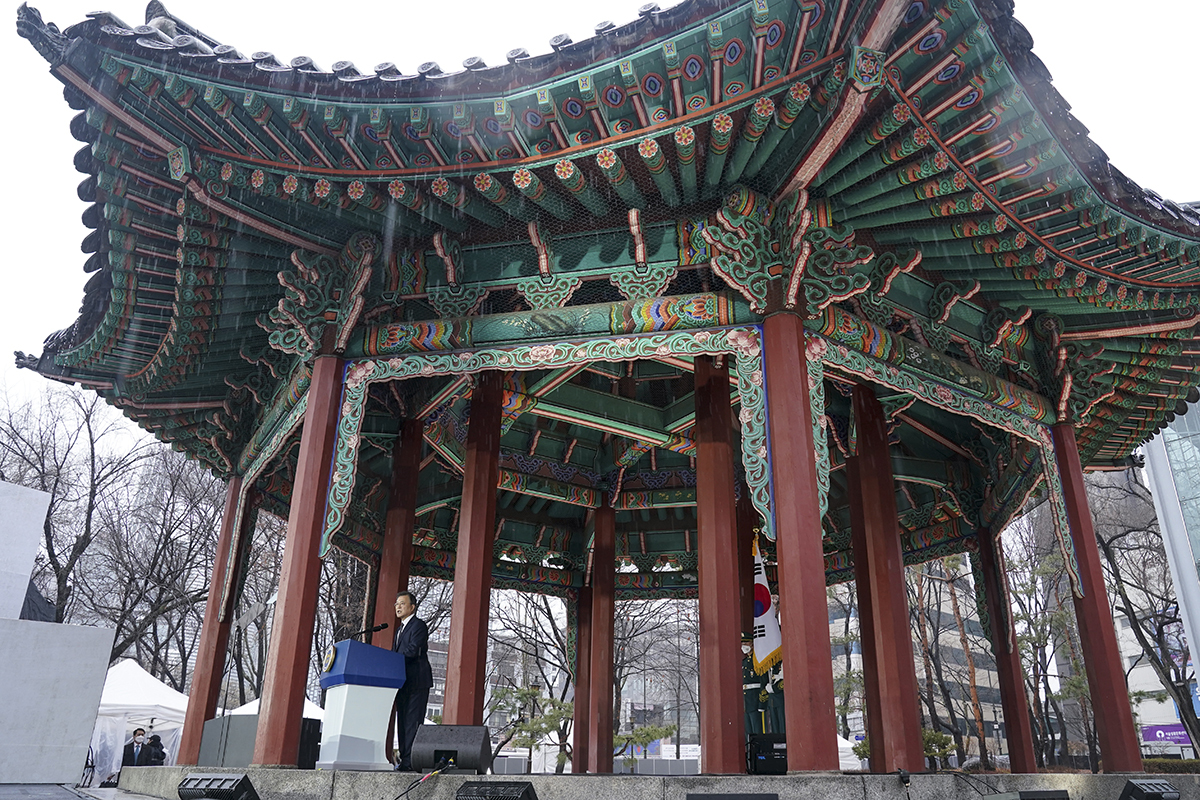 President Moon Jae-in delivers his speech at a ceremony marking the 102nd anniversary of the March 1 Independence Movement in Seoul on Monday. (Cheong Wa Dae)
Despite Japan’s claims that the historic issues, including apology and compensation for victims, have already been resolved under a 2015 deal signed by the two countries, Korea has maintained its principles that the government cannot intervene in the legal fights of individuals.

A series of sensitive court rulings in favor of Korean victims of forced labor and sex slavery have led to vehement protests by the Japanese government, further chilling the decades-old rivalry that has since spilled over into the economy and security realms more recently.

With the US under a new president upping pressure on the Asian allies to tighten ties in the face of an assertive China and a defiant North Korea, Moon has sent a flurry of conciliatory gestures toward Japan but his Japanese counterpart has yet responded to the overtures.

On Monday, Moon noted again that bilateral cooperation will not only benefit the two countries but also facilitate stability and prosperity in Northeast Asia and the trilateral Korea-US-Japan partnership.

“There has never been a time when cooperation among neighboring countries has been as vital as it is now,” he said, suggesting Japan join a Seoul-led cooperative body dealing with COVID-19 and other health crises that was launched last year along with the US, China, Russia and Mongolia.

Along with the joint efforts to fight the coronavirus, he also pinpointed the upcoming Tokyo Olympics as a crucial opportunity to pave the way to restarting peace talks on the Korean Peninsula between Korea and Japan, the two Koreas and North Korea and the US, pledging Seoul’s full support for its success.

Moon had earlier made similar proposals to North Korea as a way of resuming the stalled inter-Korean talks.

Japanese media also paid keen attention to Moon’s conciliatory overtures, reporting his remarks as breaking news earlier in the day. But they cautioned about pinning excessive expectations on what they criticized as a lack of new or concrete steps to ease simmering tensions.