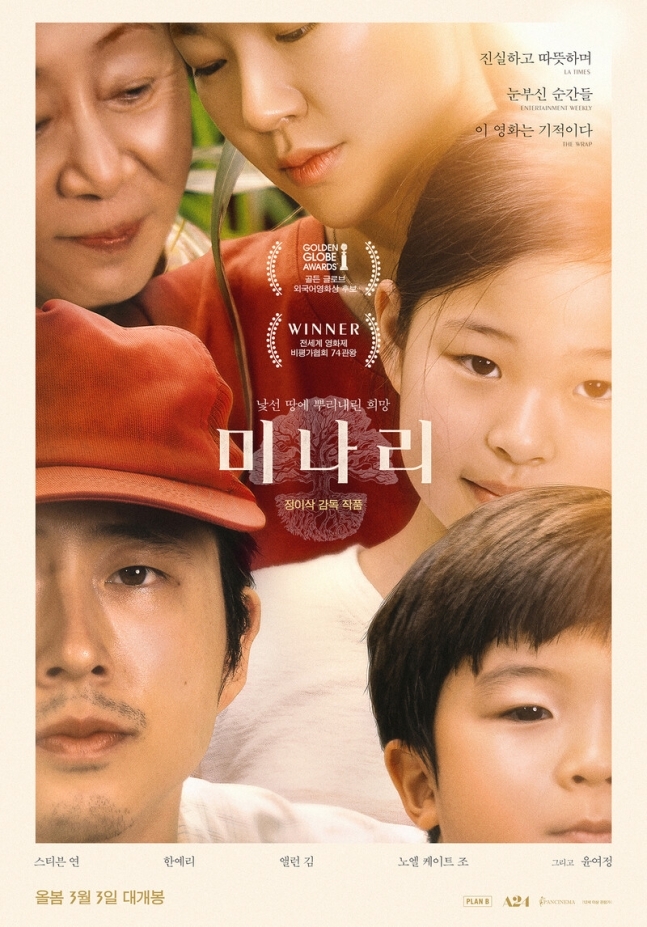 “Minari” (Pancinema)
Following the epic win of “Parasite” last year, “Minari,” a film by a Korean American director, won for best foreign-language film at the Golden Globe Awards on Monday.

In a virtual ceremony held in Los Angeles and New York on Sunday evening there, “Minari” was named best motion picture in a foreign language. Other contenders were “Another Round” from Denmark, “La Llorona” from Guatemala, “The Life Ahead” from Italy and “Two of Us” from France.

“‘Minari’ is about a family. It is a family trying to learn how to speak a language of its own,” director Lee, who is a second-generation Korean American himself, said in his acceptance speech. “It goes deeper than any American language and any foreign language; it is a language of the heart.”

Chung’s acceptance speech was an apparent reference to the controversy over the film being nominated for the foreign-language film award because it does not meet the Golden Globes’ 50 percent English-language requirement.

Hollywood celebrities and film figures, including Korean Americans and others of Asian ethnicity, criticized the Golden Globes and the Hollywood Foreign Press Association for the decision, labeling it racism. They say that “Minari” is a US film, made by a US director, shot in the US and financed by US firms.

Since it was first shown at the Sundance Film Festival last year, the film has been on a winning streak, earning a number of titles and nominations for US film awards. Youn Yuh-jung, who features in the film as the family’s grandmother, has been recognized with numerous awards for best supporting actress.

“I tried to tell a very personal story with this. I am very surprised at the response,” said director Chung during an online press interview Friday.

“As I reflected on why this film connected with a wide range of audiences, I feel it’s not because it’s about me, about immigrants, about this particular situation socially. I think it has to do with human beings and relationships, I think as we all as people around the world wrestle with what Yi family is wrestling with: the idea of how do we love each other in a difficult situation.”

“Minari” now looks forward to the Academy Awards, with nominations scheduled to be announced on March 15. The film will hit local cinemas Wednesday.