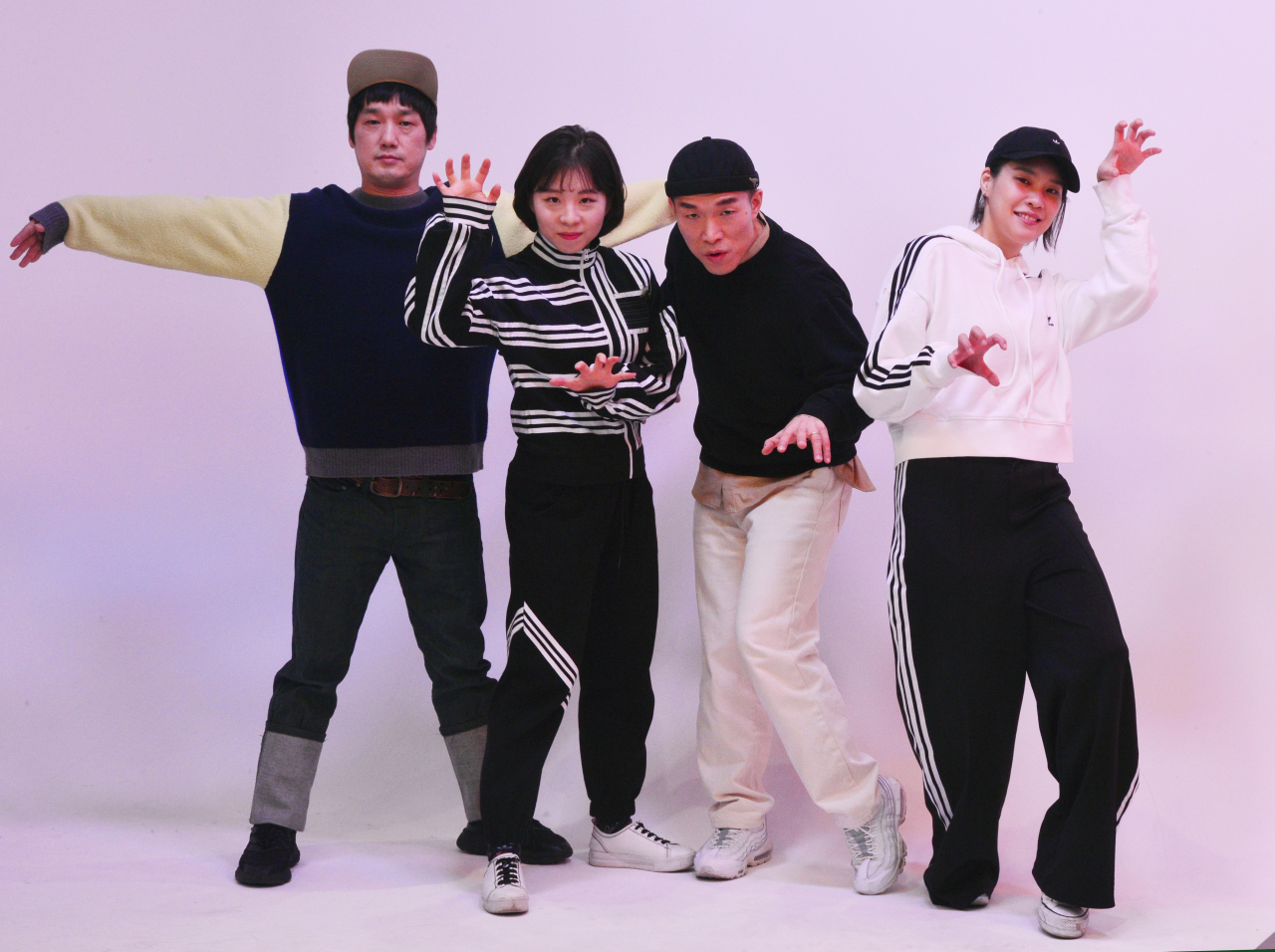 Four members of Band Leenalchi -- (from left) drummer Lee Chul-hee and vocalists Shin Yu-jin, Ahn Yi-ho, Kwon Song-hee -- pose before an interview with The Korea Herald at the office's studio in Seoul on Feb. 19. (Park Hyun-koo/ The Korea Herald)
You know you’ve made it when you hear your songs everywhere you turn. When you are signed up with major advertisers, including Samsung Electronics for their latest phone commercial, you know you are at the top of your game.

Band Leenalchi finds itself in just that position. Launched in May 2019, the seven-piece band took the country by storm when tourism promotion videos featuring the band’s music and the Ambiguous Dance Company went viral last summer and there has been no looking back.

Ironically, in a year when all travel ground to a halt, videos highlighting popular destinations in Korea caught the imagination of global audiences, with unfamiliar yet catchy music and kitsch dances. The Korea Tourism Organization’s videos, titled “Feel the Rhythm of Korea,” have recorded more than 600 million views from around the world. So successful was the campaign that the KTO employee responsible for the project was given a promotion.

Band Leenalchi’s music cannot be neatly categorized into a specific genre. The band itself is an odd mix. The four vocalists are classically trained in gugak, or traditional Korean music. Then there are two bass guitarists and a drummer with years of experience working with pop musicians. The band’s album “Sugungga” includes all but two songs from the pansori “Sugungga,” that dates to the Joseon period.

How does this eclectic outfit render the centuries-old story of an ailing Dragon King looking for a cure and a rabbit whose wits save him from an almost certain death? In a very unexpected way. 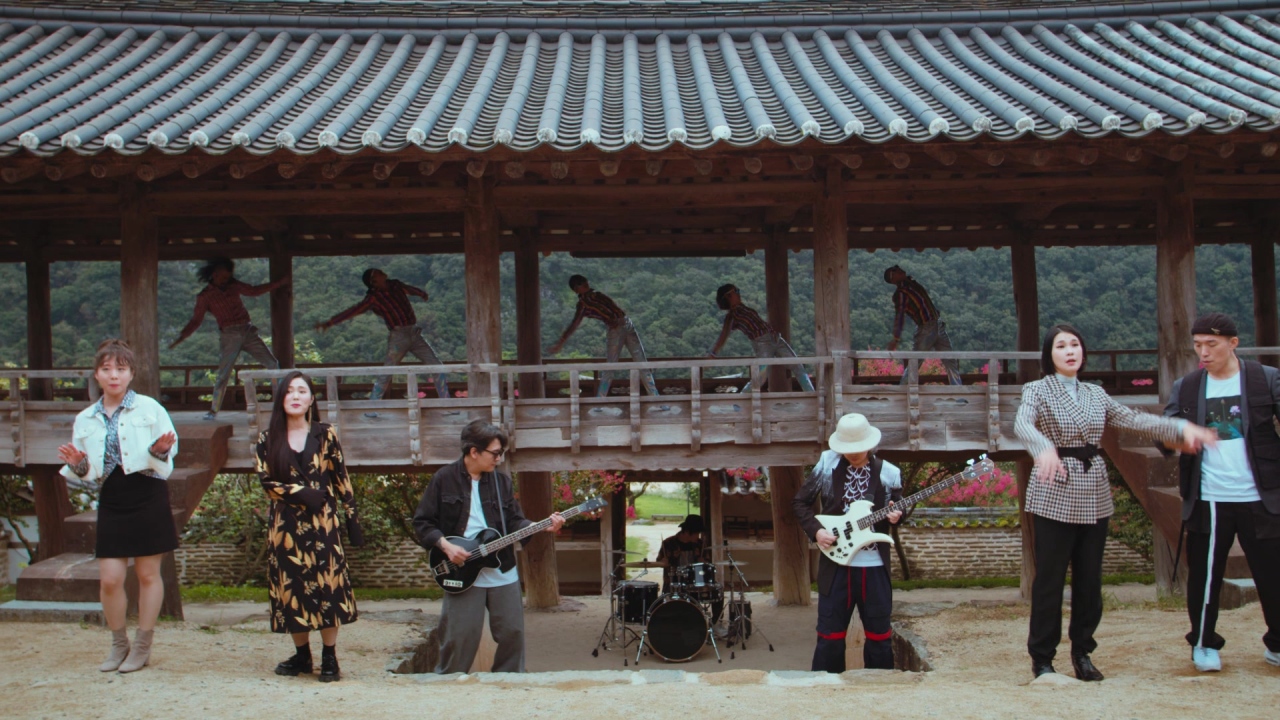 Band Leenalchi is seen performing in a scene from the Korea Tourism Organization's "Feel the Rhythm of Korea" video series. (KTO)
Take the most popular track from its album, “Tiger is Coming,” for example. A very short song in the original, “Tiger is Coming,” is reworked into an entirely different piece, more than five minutes long, using the phrase “Tiger is Coming” as a hook that is repeated throughout. The beats of the bass guitars and the drum sound ever so slightly out of sync with the leitmotif. If at first the piece sounds jarring, especially for those with even the vaguest idea of how traditional gugak sounds, listen on and you will soon be struck by the brilliance of the piece. The genius of Band Leenalchi’s “Sugungga” is the deconstruction of the familiar and the subsequent reconstruction that results in a piece that is completely new but one that does not feel entirely unfamiliar.

People have scrambled to find the right word to define the singular music of the band. Some call it fusion gugak, some would label it Joseon-pop after the now ubiquitous K-pop genre. For this year’s Korean Music Awards, taking place online on Sunday, Band Leenalchi has been nominated for five awards -- Musician of the Year, Album of the Year, Song of the Year, Best Modern Rock Song and Best Crossover Album. It is telling that “Tiger is Coming” has been nominated in the Best Modern Rock Song category, while the album “Sugungga” has been nominated for Best Crossover album, with the judges calling it the “sexiest album of 2020.”

Cognizant of the difficulties in finding just the right label and at the same time not wishing to be limited by a label, the band bills itself an “alternative pop band,” drummer Lee Chul-hee explained during an interview with The Korea Herald last Friday. “It is generic and useful. It allows us to work with greater freedom and it satisfies the listeners’ curiosity,” Lee said.

Following their official debut as Band Leenalchi at the Hyundai Card Understage showcase in May 2019 with a “Sugungga” project, the band expanded its exploration of one of the five extant pansori today. In 2020, it released an LP titled “Sugungga” and last week issued a CD version with two additional tracks -- one entirely new and another that could not be included in the LP due to the space limitations.

The choice of “Sugungga” for the debut album was natural for the band. “We started out with ‘Sugungga’ project,” said vocalist Kwon Song-hee. “You can dance to it and there are many animals (that are anthropomorphized). I think it was the most appropriate. Won’t Simcheongga be too sad?” she said, referring to a pansori that tells the tale of a daughter who sacrifices her life to restore her blind father’s eyesight.

Vocalist Ahn Yi-ho agreed that it was music to which one could dance. “All the major ‘daemok,’ or let’s say numbers, are covered except for two. We couldn’t work them out (into danceable pieces),” he said.

As for the great popularity of “Tiger is Coming” -- which has numerous parodies on YouTube by young and old alike -- Ahn credited the experts who were involved in creating the piece, including the Ambiguous Dance Company.

He also noted that the song piqued people’s curiosity. “It aroused people’s interest. People think they know it, but don’t quite know it and it is interesting enough that they want to know more,” Ahn said.

“We tried to maintain the color of pansori as much as possible without overdoing it,” said vocalist Shin Yu-jin.

If anyone found “Tiger is Coming” a bit confusing or puzzling at first, it was intentional. “Our music lies at a point where music (pansori and pop music) clash. The beat is difficult by design,” said Ahn. “Most attempts so far had been to mix up everything. But we allowed the different beats (of pansori and western music) to proceed simultaneously. I think that is the provocative attraction (of our music),” Ahn said. “We each did what we do best, combined them and an unexpected color emerged.”

What are some of the biggest differences between traditional gugak and their music? All the vocalists agreed with Shin that speed of the music is very different. “It is much faster and I needed to adjust. The slow music was reworked to a beat to which the audience could dance,” Shin said. In certain songs, there are lengthy narrations that are spoken at a furious pace much like a rap.

Ahn saw a difference in purpose of the two music genres. “If a song could be likened to a poem, pansori is closer to a novel. Pansori strives to tell a story that could been drawn in one’s head,” he said. “That leads to a difference in the texture of the sound.” ‘

“Gugak vocalists sing with their entire body. Pansori uses the whole body to express the story. It is almost like acting in partnership with ‘gosu’ (percussionist),” said Shin.

The responses of the vocalists’ teachers to their former charges’ groundbreaking attempts are telling. While some teachers remain reserved, others have been encouraging and welcoming of their efforts. Shin’s teacher, an innovator herself, has been very supportive. “She has always been open to diverse attempts. At the same time, she told me not to forget the fundamentals,” Shin said.

Similarly, Ahn’s teacher told him to attempt different things but to always be centered, know what it is that he does, and then go forward. Ahn recalled his teacher telling him to do his best and to not let the music down.

For Ahn, genres are largely irrelevant. In fact, he feels that dividing music into different genres gets in the way of truly enjoying music. “I hope people listen to it the way they hear it.”

The band members had not expected what could be called overnight fame and success. “We thought the Korean market would be a difficult one to crack but we are surprised at how we have done so far,” said Ahn.

The members are aware of the keen interest in the band overseas. They get a feel for their global popularity when they see comments to their videos in different languages and they are eager to expand overseas. “We were invited to Fuji Rock last year but couldn’t go because of the pandemic,” said Kwon.

“I am curious about festivals. I want to spray water, too. I’ve never been to one and so I am really curious,” said Ahn enthusiastically.

Lee, who has performed in the festival circuit, expressed regret about music festivals having to be indefinitely postponed since last year. “For a musician, it is a heart-throbbing experience. It is also an opportunity to grow as a musician,” he said.

The band decided on its name through a vote. Bassist Jang Young-gyu, who also serves as the producer, proposed Leenalchi, after a 19th century pansori master. Leenalchi was a stage name of one of the eight pansori masters, so named because he was a skilled tightrope walker, as swift as a flying fish, before he made his name as a pansori singer. “I think the sound of the name Leenalchi and our music go well together,” said Kwon.

Taking the name of a master as the band’s name could have been a risky move, but it seems to have been the right choice. Band Leenalchi is living up to its name and perhaps more, swiftly ushering in a new era when gugak is enjoyed as music, a matter of individual preference that has little to do with ideology, as Ahn put it.