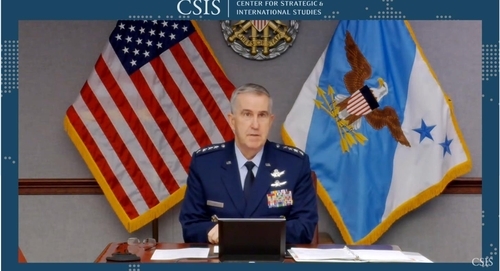 Gen. John Hyten argued the North poses one of the most immediate threats to the US in that the country has a real potential of using its weapons against the US.

"Our national missile defense capability is clearly focused on North Korea right now, not on China, Russia and Iran," the Air Force general told a webinar hosted by a Washington-based think tank, the Center for Strategic & International Studies.

"We are starting to look hard at Iran because Iran continues to build missiles in a significant way and we have to be able to respond to that," he added.

"Without going into the classified details...I'll just say...go and look at the video of the North Korean parade, and you will just see different missiles coming through on that parade," he said.

North Korea has maintained a self-imposed moratorium on nuclear and long-range missile testing since November 2017.

However, the North unveiled its latest and largest intercontinental ballistic missile in a military parade staged in October that marked the 75th founding anniversary of its ruling Workers' Party.

The US general noted the challenge posed by North Korea is the same as those presented by others throughout history.

Unlike others, however, North Korea has the potential of actually using its weapons, Hyten insisted.

"The simple answer is because there's a chance they would actually fire it at us, and therefore we want the ability to shoot it down," he said when asked what implications a rogue state such as North Korea has on the US' development of next generation interceptors.

"And I would challenge anybody that lived through 2017 to look at that problem and not realize that was a real possibility that Kim Jong-un and North Korea would actually use a ballistic missile, possibly with a nuclear warhead and anger at the United States, and therefore we better have a way to defeat that," he added.

North Korea staged its sixth and latest nuclear weapons test in September 2017, which was also followed by a series of long-range missile tests.

"We have to make sure that as we go forward, we maintain the ability to deny the North Koreans the ability to effectively attack the United States with confidence," said Hyten, highlighting the need for next-generation missile defense systems.

"This is going to be a long term issue as we look at the adversaries that we face and potentially could face in the future, and make sure we always have the capability holistically to stay ahead of them." (Yonhap)