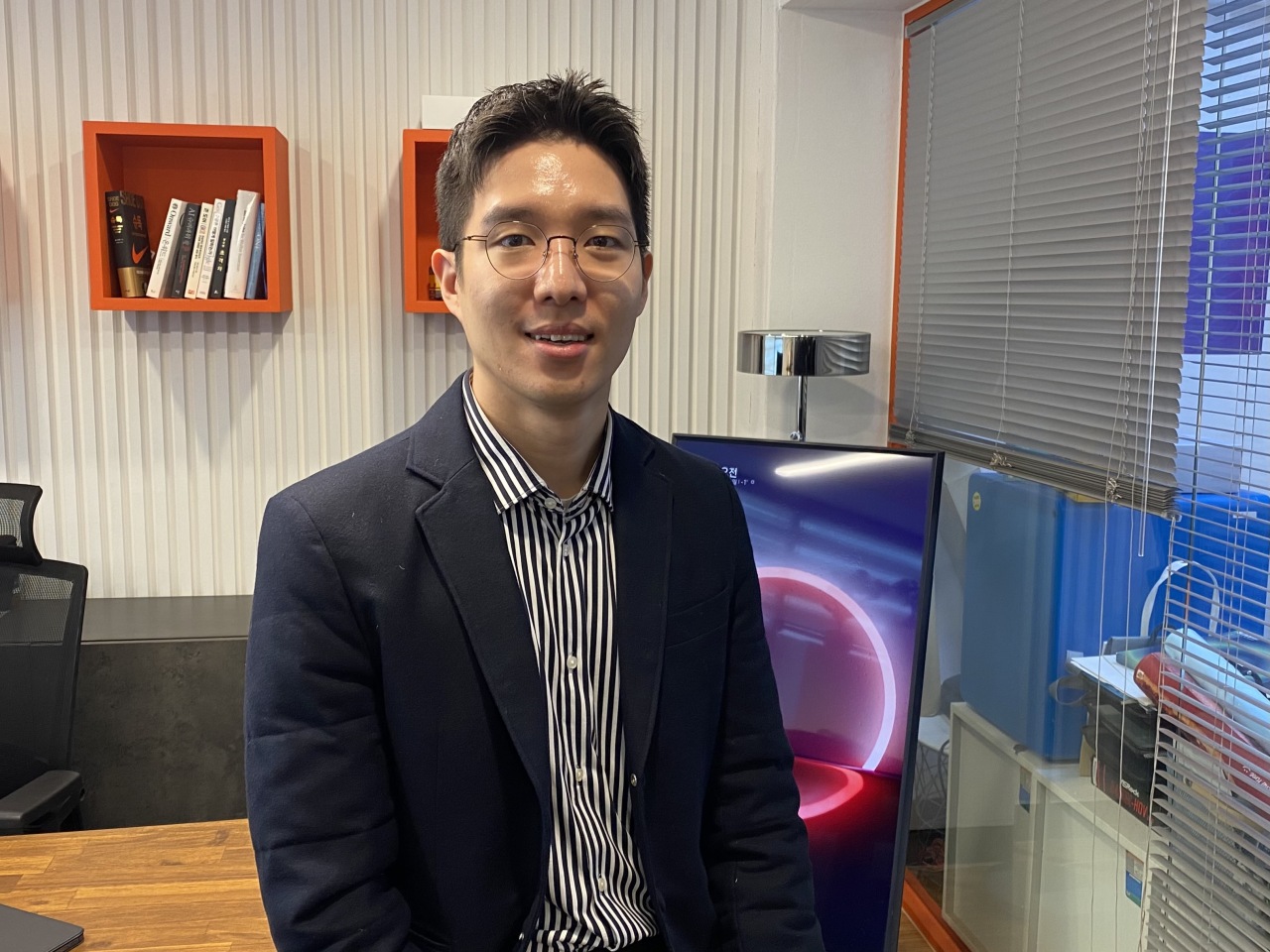 Gopizza founder and chief executive officer Lim Jae-won pose during the interview with The Korea Herald. (Jo He-rim/The Korea Herald)
How did McDonald’s and Starbucks expand their businesses into global franchise giants?

For Lim Jae-won, the answer was clear: giving customers what they want at a consistent quality wherever they are.

And the approach has proven effective. With his “smart” kitchen that can bake six single-serve pizzas in three minutes, Gopizza now has over 100 direct stores and franchise outlets, not only in South Korea, but also in India, Singapore and Hong Kong -- just two years since he incorporated Gopizza and started a franchise business.

The entrepreneur wants to change perceptions about pizza, and contend with global fast food chains like McDonald’s, Lim said in an interview with The Korea Herald on Friday.

Starting from the bottom

Having majored in business management, Lim dreamed of creating a brand of his own. But he never imagined he would be in the restaurant business.

Then just one day on his way home from work, a question came to mind.

“I was hungry, and I wanted to have pizza for dinner. But it seemed to be a heavy meal. Then I wondered, why can’t pizza be a fast food, served fast, and for a single person like the burgers at McDonalds?” Lim, 32, said.

The standard pizza is usually large and round, with six to eight slices -- too much for a single meal in a one-person household. Prices generally range from 19,000 won to 35,000 won here.

On that day in February 2015, Lim drew up the entire concept for Gopizza, from its name to how it would serve affordable, one-person offerings of pizza, similar to burger chains.

Unlike pizza by the slice that has grown in popularity in Korea over the last decade, Gopizza’s servings would be made to order, in ovals sliced into four sections.

At the time, Lim had no experience of running a business nor much work experience. So he studied the market, tried a part-time job at a pizza franchise and took cooking classes to learn about pizza.

With a couple of friends from college, Lim launched Gopizza with a food truck. Luckily, his moving pizza parlor was able to obtain a spot in the Seoul Bamdokkaebi Night Market in Yeouido Han River Park, promoted and operated by the city government on weekends.

A year later, Lim wrapped up his food truck business and opened pop-up locations in department stores, but daily sales there would be less than 1.4 million won.

“Experiencing the different business environment taught me a lot,” Lim said. It was in those two years that he also tried out different types of ovens, and came to develop and patent his own automatic pizza oven “Goven.” Gopizza’s Goven (Jo He-rim/The Korea Herald)
According to Lim, only one employee is needed to run Gopizza’s smart kitchen. Once an order is made, the AI Smart Topping Table accesses the recipe and shines LED lights on the partially baked dough to inform the employee of what ingredients should be added and where. The pizza is then baked in the Goven in three minutes.

The par-baked dough is produced in the company’s factory in Gangwon Province.

With the technology, Lim incorporated Gopizza in 2018 and started a franchise business to open stores across South Korea.

The company is now in the process of developing Albago, which automatically spreads the sauce on the dough, and an automated monitoring system that oversees ongoing processes in the kitchen, Lim said.

Lim said he is a fast learner and has a challenging spirit. Beginning with his food truck in 2016, he made advances year by year.

Over the years, Lim has obtained an accumulated investment fund of about 8 billion won from investors such as Capstone Partners and Big Basin Capital.

He was also among the 300 listed in Forbes 30 Under 30 Asia in 2019, in which the magazine annually selects talented entrepreneurs and change-makers under the age of 30 across different sectors.

“For Gopizza to become a global franchise, it is important to win dominance in one of these big countries. The US is already too saturated, and China is not the most favorable condition for foreign businesses. India is a country with great potential for growth,” Lim explained. 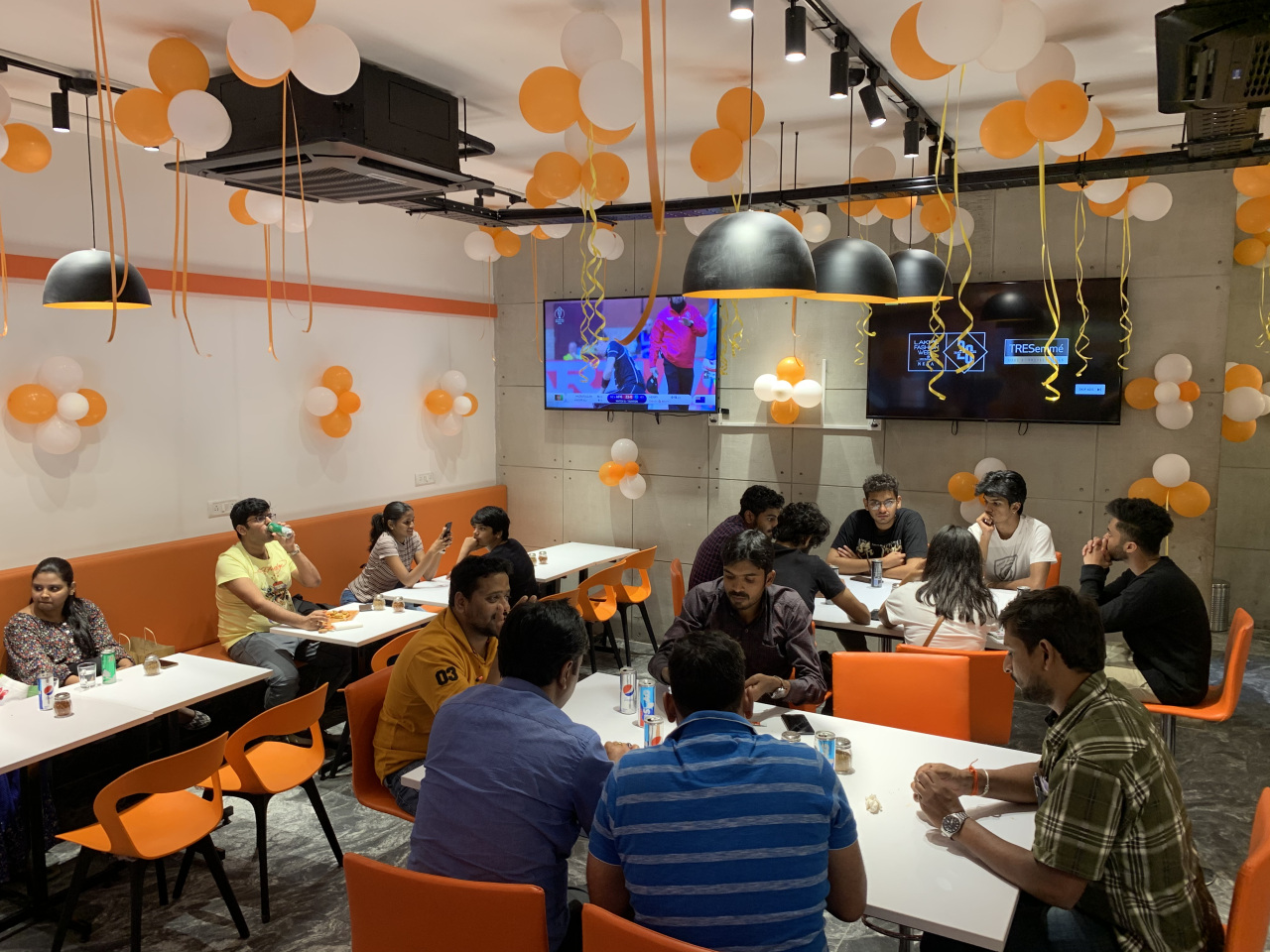 Inside Gopizza branch in Koramangala, India (Gopizza)
Starting a business in India is not easy, however, with very different cultural and economic situations from Korea.

“It was challenging on the moment I entered the country,” Lim said, recalling how airport officials had singled him out and asked him to pay to pass the immigration checkpoint.

Having experience living overseas doing volunteer work in Myanmar and studying in Singapore, Lim had developed an open mind to differences, and he noted this was one of the most important characteristics entrepreneurs should have when expanding overseas.

“Differences in cultures, and even between people, are not something subject to persuasion. They are just differences that should be accepted as they are.”

So while pursuing the idea of providing the same quality and service to customers around the world, Lim has adopted a localization strategy.

Considering how meat is taboo to many in India, Gopizza has introduced nine vegetarian pizzas in that market not sold in Korea, along with nine non-vegetarian pizzas. It also presents a very different price range, with the cheapest item at the equivalent of about 1,500 won.

In Singapore, where Korean pop culture is well-known and popular, Gopizza has “more Korean” menus. The pizza chain entered the country in April 2020.

“So they would have the Korean-style fried chicken and bulgogi topping pizzas that are not sold in Korea,” Lim said.

As of February this year, Gopizza was to open its 100th outlet worldwide in Suntec City, the largest mixed-use shopping mall in Singapore.

The pizza maker said it has been seeing sales grow 300 percent annually in the last three years, and had recorded total sales of 10.7 billion won in 2020.

Lim sets no limit to the expansion of Gopizza. While it is not yet a listed company, Lim said he aims to make Gopizza a company with an aggregate value of 10 trillion won within the next 10 years, and to have 10,000 stores in operation around the world.

No food franchise in Korea has yet achieved an aggregate value of 1 trillion won.

Another long-term goal he has is to change the perceptions on what pizza is.

“People typically think of pizza as a big round slab of dough and pretty expensive. This standard has been set by the companies for their benefit and customers just took what they were given,” Lim said.

“I wish to make at least 3 out of 10 people think of pizza as Gopizza’s shape, ovals, and I also want to make people naturally consider pizza as a single-serving item.”