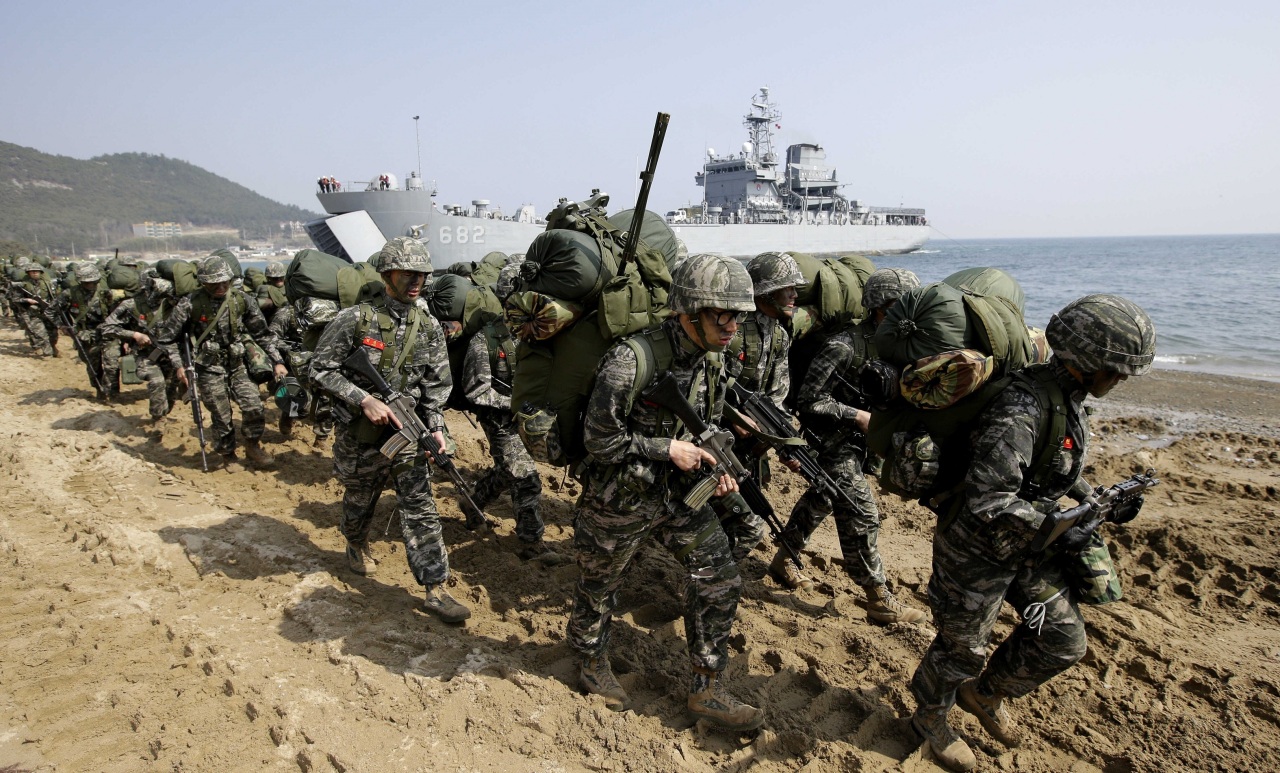 South Korean Marines take part in a Korea-US joint landing operation in this 2017 file photo. (AP-Yonhap)
South Korea’s push to take over its wartime operational command from the US, which has been responsible for it since the 1953 Korean War armistice, has taken a more serious hit after a former US commander openly challenged the plan.

Retired Gen. Burwell Bell, who headed the joint forces from 2006 to 2008, withdrew his previous support for the transition, saying the change would have a devastating fallout.

“If the United States places restrictions on the employment of its troops in wartime due to a premature decision by the Republic of Korea to force OPCON transfer, this would likely fracture the longtime alliance and put the Korean people at great risk of falling under the North Korean regime,” Bell told Voice of America in an interview Feb. 10.

While Seoul had discussed the move as early as 2003, the Moon Jae-in government is hoping to expedite the process and deliver on its promise to wrap up the transfer by May 2022 before Moon leaves office. The US is demanding that the two allies take a step back to see if they are prepared for what would be a major change.

Seoul and Washington have recently missed out on opportunities to test readiness because of COVID-19.

“When the conditions are fully met, we’ll be ready,” Gen. Robert Abrams, the current US military chief in South Korea, said in November. Those conditions include Seoul’s improved combat readiness against Pyongyang and the establishment of a favorable security landscape on the Korean Peninsula.

The two US commanders’ concerns over the wartime role transfer stem from a nuclear-armed North Korea and its uninterrupted nuclear buildup. North Korea is best countered by the US leading the charge, since it could provide a “nuclear umbrella for the South,” Bell said.

Ryu Seong-yeop, an intelligence analyst at the Korea Research Institute for Military Affairs, agreed with Bell.

“He’s right. We have to meet the conditions that we can counter the nuclear threat to assume the wartime role. But we haven’t had enough time to synchronize our combined forces in the first place,” Ryu said.

President Moon, who believes the armed forces should be more independent from the US, is pressing on retaking the command as part of the liberals’ decadelong campaign for a more self-reliant military.

“A completely ‘self-reliant’ military exists in theory,” said Kim Ki-ho, a retired Army colonel who was once in charge of operations at the Combined Forces Command between Seoul and Washington.

“We chose to entrust the US with the wartime command for better defense against North Korea. We passed on opportunities to retake it because of the growing nuclear threat,” said Moon Seong-mook, chief of the Unification Strategy Center at the Korea Research Institute for National Strategy.

Moon, a former one-star Army general, said the US could readily provide extended deterrence -- powerful reinforcements such as nuclear weapons, bombers and attack submarines -- should war break out.

Bruce Bennett, a senior defense analyst at Rand Corp., said Seoul and Washington should now factor in the ever-growing nuclear threat from Pyongyang because its nuclear arsenal is greater in size and reach than before.

The US should offer South Korea a major role in implementing the nuclear options if Seoul takes charge, Bennett added.

“I also believe that the conditions have not yet been met, and that the training on the employment nuclear weapons and integration of ROK personnel into this process is going to take some time.” The Republic of Korea is the South’s official name.