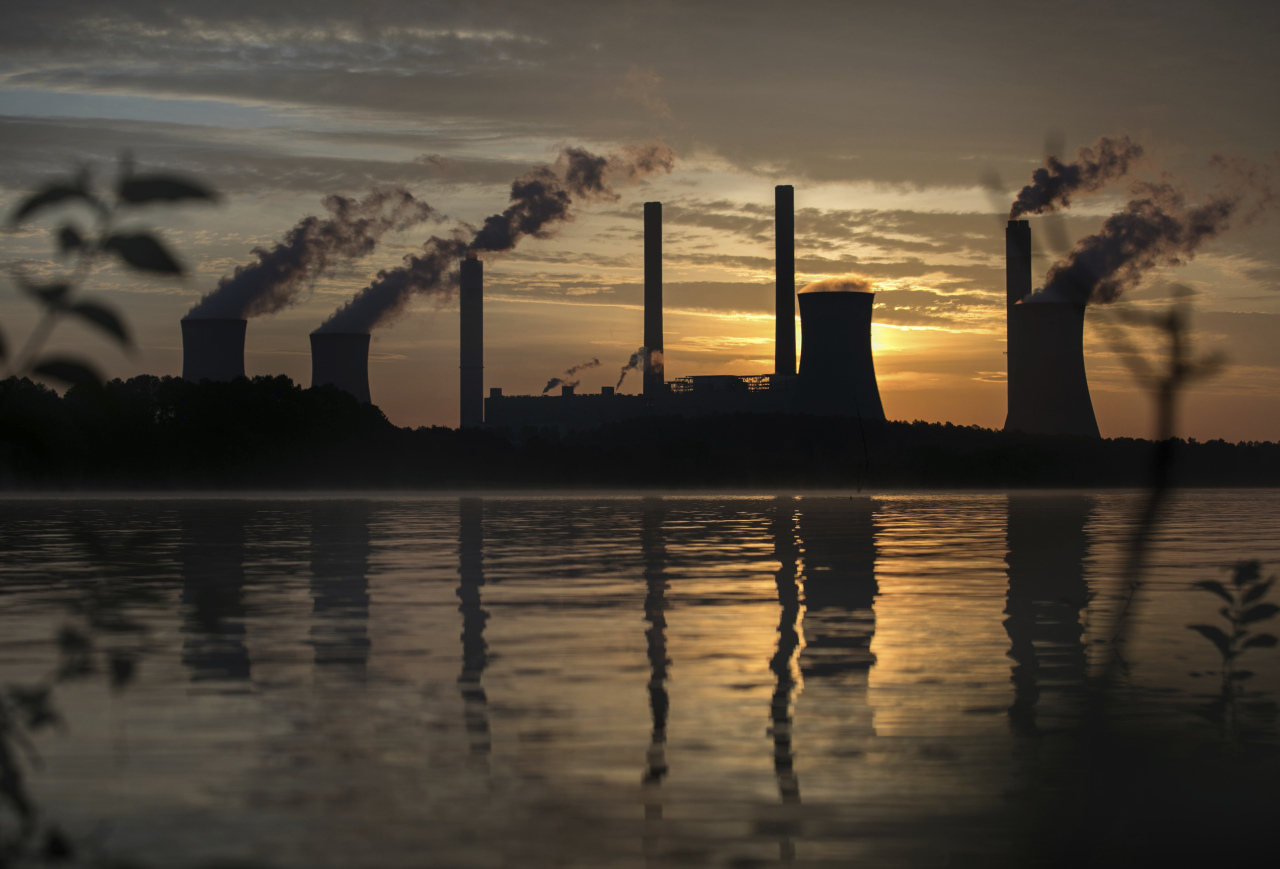 In this Saturday, June, 3, 2017 file photo, the coal-fired Plant Scherer, one of the nation's top carbon dioxide emitters, stands in the distance in Juliette, Ga.. World leaders breathed an audible sigh of relief that the United States under President Joe Biden is rejoining the global effort to curb climate change, a cause that his predecessor had shunned. British Prime Minister Boris Johnson and French President Emmanuel Macron were among those welcoming Biden’s decision on Wednesday, Jan. 20, 2021 to rejoin the the Paris climate accord. (AP-Yonhap)
South Korea’s sovereign wealth fund, managing $183.1 billion in assets, has cut its coal stock exposure in the United States, but its investment in coal-related US listed shares still stands larger compared with other sovereign wealth funds in the world.

The findings indicated that Korea Investment Corp. has room for more aggressive action to fight greenhouse gas threats posed by coal, and to perform its fiduciary duty to take environmental risks into account.

According to its regulatory filing to the US Securities and Exchange Commission, the KIC as of end-2020 was holding $417 million worth of shares in US-listed North American companies that were either mining, producing power or providing energy services with a coal share of revenue of 20 percent or more, under the criteria provided by German-based not-for-profit organization Urgewald.

The figure shrank by 13.4 percent from the 2019 US coal stock holdings by the world’s 15th-largest sovereign wealth fund, the filing also showed.

US coal stocks accounted for 1.2 percent of the total US equity holdings worth $33.3 billion in 2020 by the sole Korean sovereign wealth fund, dedicated to overseeing foreign currency-denominated assets entrusted by the Bank of Korea and the Korean government. The proportion grew smaller from 2019’s 1.8 percent.

The proportion, on the other hand, still appears to remain bigger than other sovereign wealth funds in the world.

An example is Norges Bank Investment Management, which oversees global investment fund of the Government Pension Fund of Norway. Its $1.4 billion exposure to US-listed coal stocks accounted for 0.4 percent of its total US equity holdings.

Other sovereign wealth funds, such as Singapore-based Temasek Holdings and Saudi Arabia’s Public Investment Fund, were seen not to be investing in any coal stocks in the US, according to their latest disclosures. 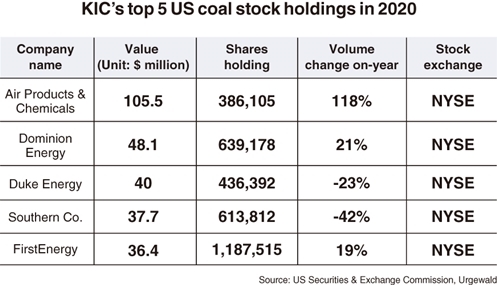 Having sole investment discretion, KIC disclosed that it was a minority shareholder of 20 US companies under Urgewald’s Global Coal Exit List, including Dominion Energy, Duke Energy and Southern, as well as the Canadian firm Fortis.

The sovereign wealth fund is working to design an exclusionary investing strategy, including a coal divestment road map, by the first half of this year, according to the KIC.

The findings came amid KIC’s endorsements to global climate actions.

In November, KIC became one of the nine new sovereign wealth fund members of One Planet Sovereign Wealth Funds to ramp up concerted efforts to integrate financial risks and opportunities related to climate change in its asset management. The sovereign wealth fund also declared its support to the Task Force on Climate-Related Financial Disclosures then.

In the meantime, KIC’s assets under management have doubled over the past five years, and its assets recorded 13.7 percent annual return in 2020, gaining $21.8 billion on investments. KIC has allocated $78.2 billion assets to global equities.