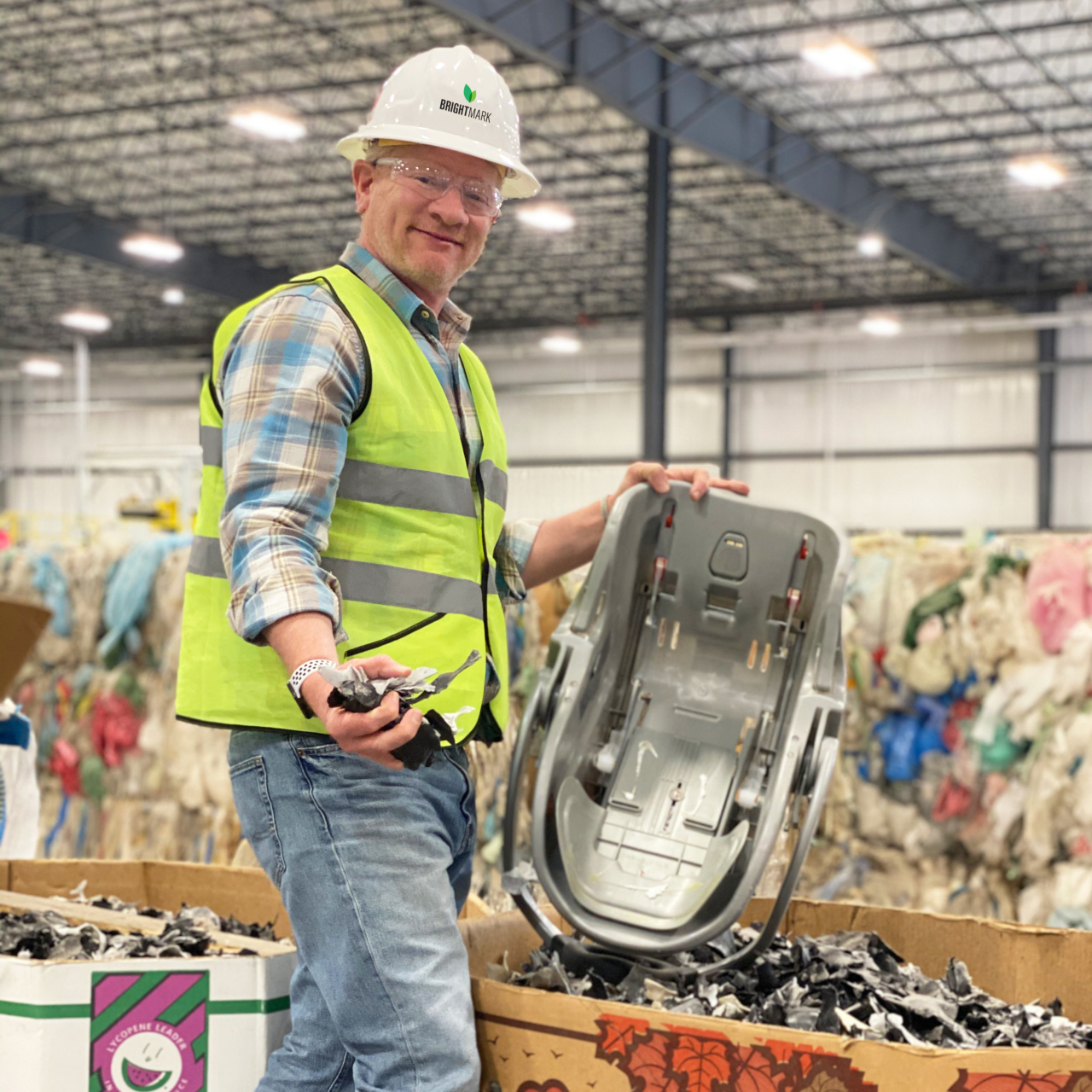 Brightmark CEO Bob Powell (Brightmark)
The world recycles only 9 percent of its plastic waste. Around 12 percent is incinerated. The remaining 79 percent piles up in landfills or is thrown into the natural environment as litter.

At this pace, there will be more plastics than fish in the ocean by 2050, according to the World Economic Forum.

Brightmark, a waste solutions company based in San Francisco, aims to tackle the 79 percent with its patented recycling technology that can turn 93 percent of plastic wastes into reusable resources.

The company chose South Korea to put its first overseas recycling facility on the ground, and for a good reason.

“Korea has a lot of plastics and is a very industrialized nation, with a very good waste management system and a desire to solve this problem,” said Brightmark CEO Bob Powell, adding that Korea is his entrée to the Asia region.

“If you look at the studies around ocean plastics, the top 10 list in terms of the rivers that create the vast majority of ocean plastics, most of the top 10 sources are located in different parts of Asia. So (Asia) is a very important region of the world.”

Last month, Brightmark signed an agreement with SK Global Chemical -- a subsidiary of SK Innovation -- to form a joint venture to develop, finance, construct and operate a plastics renewal facility in Korea with an annual capacity of 100,000 metric tons in pursuit of a “plastics-to-plastics” circular economy. 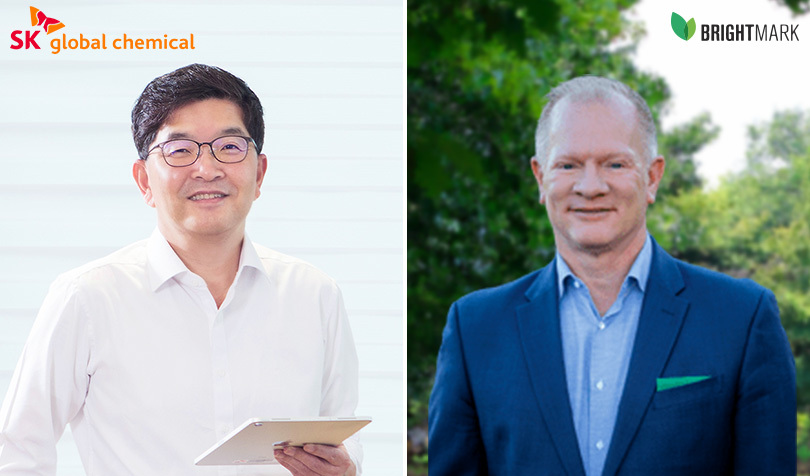 The reason why the facility alone can handle such a large capacity is because it operates 24/7.

“Continuous operation is one of the factors in making it very lost cost. The second one is the ability to produce a variety of different products. These are the two predominant reasons why it’s very lost cost, and in fact, profitable,” said Powell.

Brightmark’s plastics renewal technology works in three steps. First, once plastic wastes are collected, they are shredded and turned into pellets. Then, theses pellets are heated up inside vessels that are 8 feet in diameter and 60 feet long and vaporized in an oxygen-starved environment. Finally, the vapor is captured, cooled into liquid and processed into wax, jet fuels, lubricants, ultra-low sulfur diesel and naphtha -- input for new plastics. 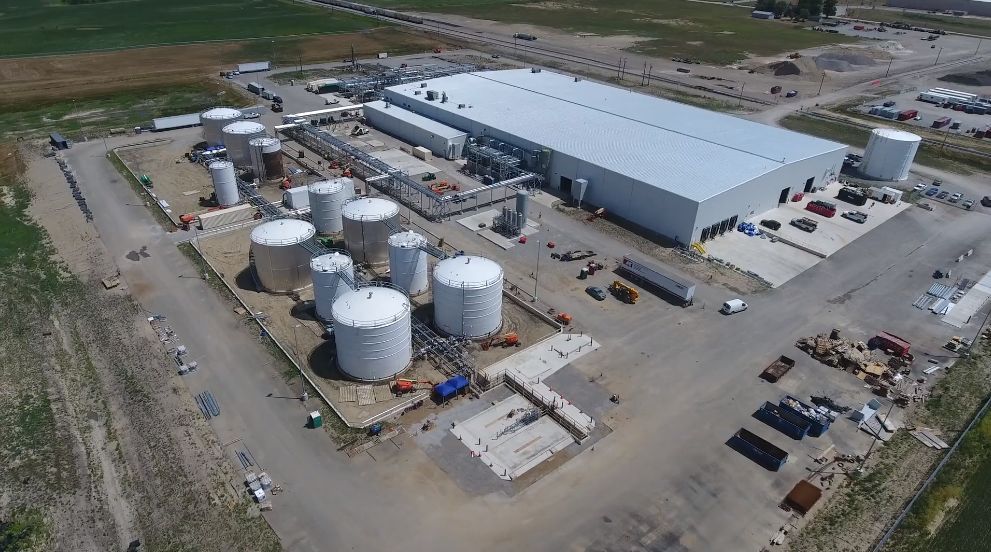 Brightmark’s 100,000-ton plastic renewal facility, now under construction in Indiana. (Brightmark)
In Korea, there are some recycling companies that process plastic wastes like Brightmark. However, they have to stop their facilities once in a while to remove impurities from the vessels. Brightmark says it can remove the impurities during operation. As plastic pallets have to be heated at around 750 degrees Celsius, halting operations is critical to profitability, as it costs extra time and money to restart operations.

According to Brightmark, the facility is 93 percent efficient, meaning that 93 percent of liquids, vapors and gases generated during the process are reusable. The remaining 7 percent are non-toxic residues that can easily be put into landfills.

As plastics are heated in vessels with almost no oxygen, there is no combustion. Also, the facility reuses gas generated from the heating process as fuel, emitting almost no greenhouse gases in the air. Brightmark is officially classified as “minor emitter” by the US Environmental Protection Agency.

Through its partnership with SK Global Chemical, which has expertise in running petrochemical plants, Brightmark aims to raise its efficiency rate.

Also, Brightmark hinted at a possible partnership with SK Innovation for recycling plastic materials such as separators inside used-up electric vehicle batteries.

“That is a really good example of how as we continue to partner with SK, we think there‘s a real opportunity to look at issues like that,” the CEO said.

The global battery separator market is expected to reach $7.43 billion by 2025 from $3.57 billion last year. SK Innovation is the world’s third largest separator producer, with a market share of 10 percent as of 2019, according to market tracker Techno Systems Research.

Also, Brightmark emphasized the sustainability of its business, saying that its 100,000-ton facility under construction in Indiana, which is nearing completion, received zero state subsidies for construction.

“We think it’s really important that if we‘re going to create sustainable solutions for the environment, that our businesses be sustainable as well. Otherwise, you’re creating solutions that won‘t work on a long term basis,” the CEO said.

Above all, Brightmark couldn’t have chosen a better timing to enter Korea.

Recently in Korea, the price of plastic waste has gone down significantly, as the coronavirus outbreak has created an oversupply. Also, the deadly virus has crippled the export market for plastic waste, as increasingly more countries are restricting plastic waste imports to take care of their own. Cheap oil prices are another factor driving down the price. When the oil price is cheaper than that of plastic wastes, companies are motivated to produce new plastic products based on petroleum instead of recycling plastic waste.

For Brightmark, which uses plastic waste as raw materials, the plunging price is a plus.

“Many countries who were receiving plastics from other countries have basically said no more. No more exporting. And then we’ve had COVID-19. As we‘re all well aware, one of the great uses of plastics is protection. So not only is there this issue of being able to export waste, we now have more wastes in this moment that are created by that personal protection. So we have a big spike right now. So, it absolutely is the right moment,” the CEO said.