The foundation spent a total of 188.7 billion won to support the startup ecosystem for three years from 2018, with a total investment of 2.43 trillion won from the private sector, said Park Nam-gyoo, a business administration professor at Seoul National University at an online press conference.

“For every 1 billion won that the foundation injected, it contributed to the creation of 13.24 jobs. In terms of budget efficiency, it’s very effective,” Park said.

The center could help create another 149,242 jobs from 2021 to 2030, according to Park’s calculations, if the foundation commits to 2.6 trillion won in funding in the next decade, based on the assumption there is an average 20 percent growth a year in budget.

Founded in 2012 by 19 domestic banks with at least 500 billion won, the foundation has supported the country’s startups through various methods ranging from office space to hosting a street startup festival. 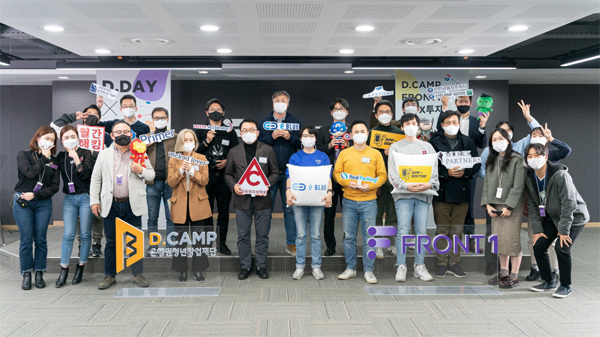 Participants pose for photo at the 80th demo day held by D.Camp in November 2020. (D.Camp)
D.Camp’s signature monthly demo day has featured 418 startups out of 4,331 applicants between June 2013 and November 2020. It also offers office space for promising startups in two prime areas in Seoul.

The foundation has invested 14.6 billion won in 126 startups so far, whose combined corporate value reached 1.37 trillion won as of the end of December 2020.

Kim, who led the organization for three years, stepped down from the position on Thursday and handed over the reins to Kim Young-duk, a former executive director of Lotte’s startup accelerator arm Lotte Accelerator.