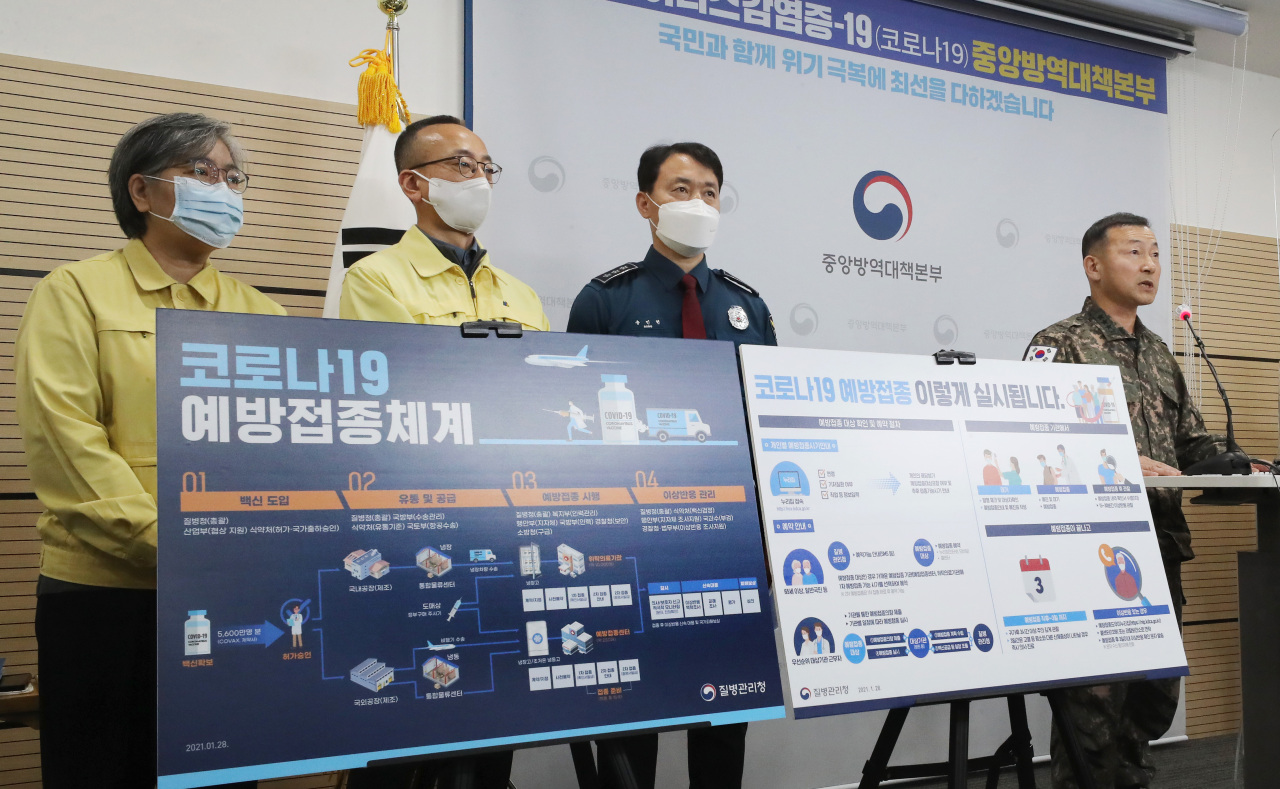 Under the government’s plan unveiled Thursday, the country will vaccinate 1.3 million people by March, 9 million by June and the rest of the 33.25 million in following months. Korea is also installing 250 vaccination centers to handle some vaccines that are harder to store and transport.

The country has so far purchased vaccines for up to 56 million people, and another deal for 20 million people-worth of doses is in discussion. It is safe to say that Korea has obtained enough to cover its 52 million people.

The news is exciting, as the vaccination program is a sign of hope for Korea to near the end of its deadly virus outbreak. The pandemic itself won’t end anytime soon, but the program could lead to the start of the final chapter.

Here are some questions you might have while waiting for these vaccines to reach your arms.


Q. When does this vaccination program start, and who are prioritized in the plan?

A. The program is starting sometime next month, and the exact start date is not set yet, but it will most likely start in the last week of February. But the country has come up with an outline on who will be the first to be inoculated.

The first doses will be offered to front-line medical workers in Seoul and nearby regions throughout February, and older adults, essential care workers at care facilities and first responders are up next in March.

The next ones in line are people aged 65 and above and other health care workers, with shots for them forecast to start in May. The government expects to start distributing vaccines to essential workers, the over-50s and adults with medical conditions in July.

The rest of all healthy people under 50 are slated to get the jabs mostly next year. Some of them might be able to squeeze in for their vaccines in the last few months of 2021.

This line of order applies regardless of nationality. As long as you are a legal resident in Korea, you will be given your share of vaccine in this order, but the government has not decided whether or how to cover people who do not have legal status or National Health Insurance.


Q. Do I get to choose which vaccine I get?

A. Unfortunately, no. There’s no liberty of shopping for which one to take in this program, the government says. It is likely that you will get whatever is on the shelf when your name is called out.

The first vaccines to arrive will be an unspecified amount of AstraZeneca’s and some through the COVAX scheme -- most likely AstraZeneca’s, Pfizer’s or both, based on Thursday’s announcement -- late next month.

Moderna’s and Janssen’s vaccines are estimated to come in the second quarter, followed by Pfizer’s in the third quarter. We don’t know yet how much vaccine will be delivered each time.


Q. So does that mean we could face supply problems?

A. That could be the case, and the authorities acknowledge that supplies could fall short from time to time. But the government said it is prioritizing stable supply and logistics for the vaccination program to continue.


Q. Speaking of logistics, how are vaccines going to be handled?

A. At the moment, the government is working to set up 250 facilities around the country to handle vaccines from Pfizer and Moderna, both of which are more complex to store and transport. Other vaccines that aren’t so complicated will be administered at around 10,000 designated clinics and hospitals.

A trial delivery run for vaccines will be held to make sure no vaccines are lost on the way, and health care workers who will administer the vaccines will undergo education in coming weeks as well.


Q. Are the vaccines effective against the new variants?

A. Officials said they are yet to discover reports that the vaccines are ineffective against new COVID-19 variants found in Britain, South Africa and Brazil. They say the doses obtained so far seem to be effective against the variants as well.


Q. Are the vaccines safe in the first place? What if I undergo adverse symptoms?

A. There have been reports of adverse effects from COVID-19 vaccines in other countries, and the government knows that could happen in Korea as well. Those receiving the jabs will be required to rest up to 30 minutes following the inoculation in case they develop any adverse reaction. Medical workers will be on standby at the vaccination center.

If you do end up developing side effects, the government will by law have to provide compensation for your damages.


Q. Are there any privileges from getting the vaccine?

A. Getting the vaccine doesn’t mean you are 100 percent immune to COVID-19, so you are still required to abide by social distancing rules and other virus control measures. So yes, you do have to wear face masks and sign in at restaurants and cafes

Once you are done with the vaccination, the government will give you a certificate. But it doesn’t give you any privilege. It’s just given to make sure that you know you received your vaccine allocation.

A. The vaccines will be provided free of charge for all Koreans and foreign residents, with the costs to be financed via the National Health Insurance Service and government funding. Whether those without state health insurance subscriptions will be included in the free coverage has yet to be decided.


Q. How will I know it is my turn to get the vaccine?

A. It is not known yet how people will be contacted when their turn is up, but local governments will be heavily involved in the scheme to get their district and municipalities’ people vaccinated when their time comes.

Officials are preparing a nationwide reservation system to track and bring in people for vaccination. People have to receive the same vaccine for the first and second inoculations, so the system will be able to track that as well.