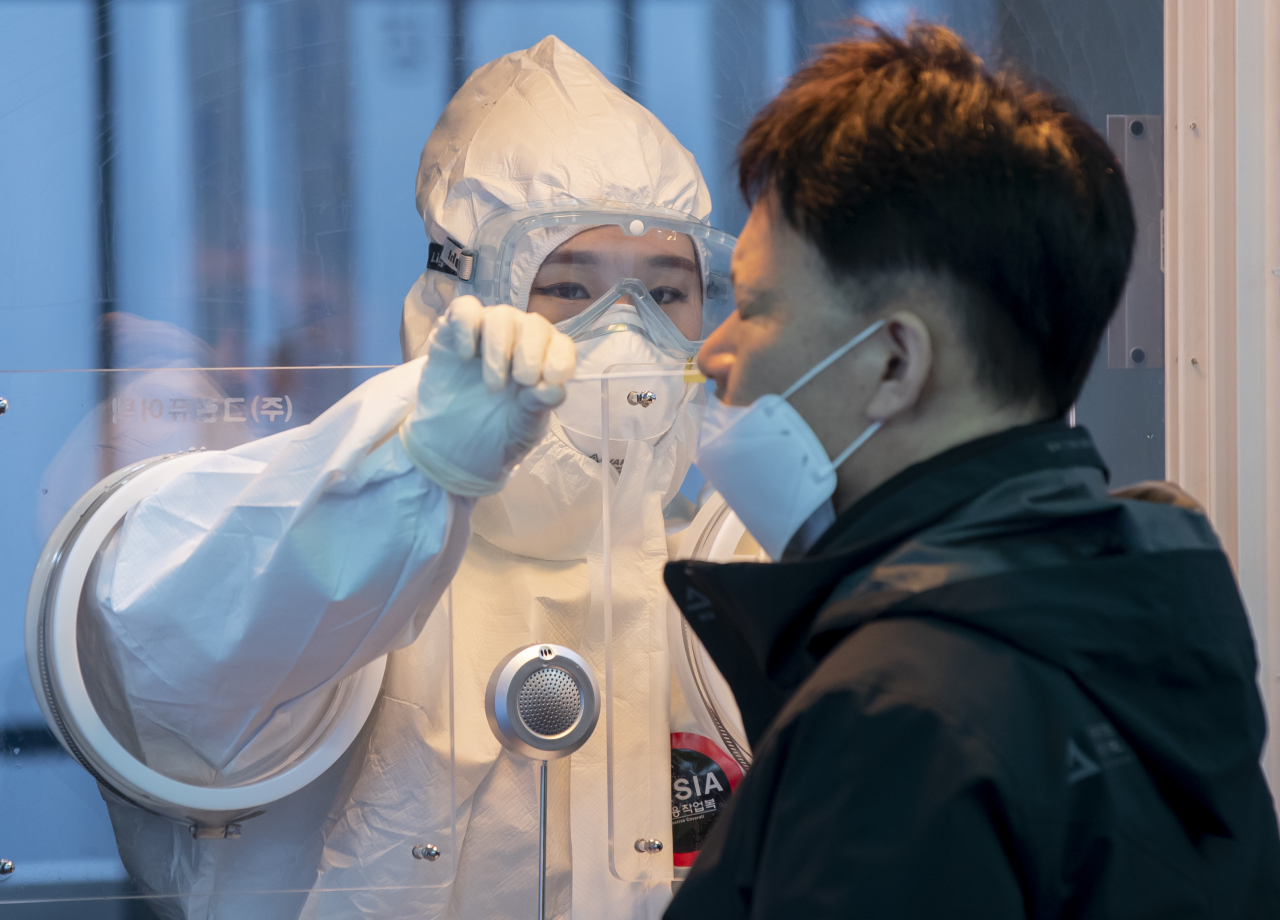 A medical worker collects nasal sample to check for COVID-19 at a diagnostics center made near the Seoul Station. (Yonhap)
Authorities warned against coronavirus complacency as potential risk factors still remain at large even though South Korea has been reporting fewer cases in recent days due to tougher virus curbs.

Health Ministry official Yoon Tae-ho said in a press briefing Friday that the government is cautious about easing social distancing rules as conditions still remain for the virus to gain force under the nation’s third COVID-19 wave.

“Although (the number of new cases) has stayed in the 300 to 400 margin, this is the size we saw during the second COVID-19 wave, so this is not a situation to be taken lightly,” Yoon said. “There is a need for us to more seriously review whether to lighten virus control measures.”

The official said the winter season remains as a big threat. COVID-19 could also gain strength from increased travel and interactions among people during the upcoming second Lunar New Year holidays.

South Korea has so far reported 15 cases of the mutated virus from Britain and two cases traced to South Africa and one case of the strain from Brazil. Disease authorities are researching to verify details of the mutated strains and whether the vaccines Korea has secured are effective against them.

Korea on Friday added 346 new COVID-19 cases -- 314 domestically transmitted and 32 imported from overseas -- raising the accumulated total to 74,262, according to the Korea Disease Control and Prevention Agency.

The latest figure is sharply down from 401 cases reported Thursday. For a week until Friday, the country has been reporting an average of 404.6 new cases per day.

By Thursday’s end, Korea had also reported a total of 1,328 deaths from the coronavirus, up 12 from a day earlier. The number of COVID-19 patients in serious or critical condition reached 299, down from 317 people a day earlier.

The country conducted 65,649 tests throughout Thursday, down from 66,100 checks done a day earlier.

In light of such changes, Yoon said the government is considering making some adjustments to social distancing rules in place by consulting with experts to lighten people’s fatigue over prolonged virus outbreak.

At the moment, the capital region, consisting of Seoul, Incheon and Gyeonggi Province, are under Level 2.5 social distancing rules, and the rest of the country is under Level 2 rules.

Business operations are restricted after 9 p.m., and private gatherings of five or more are banned until Jan. 31. Indoor gyms, cafes, karaoke establishments were given exceptions to open under strict adherence to virus control rules.

“We believe we will need more time to discuss measures that can be effective in controlling the virus situation and maintain the social aspect of the country at the same time,” he added.

Some have speculated that the government will maintain these general social distancing levels for the capital region and the rest of the country until the Lunar New Year but add exemptions for some businesses experiencing operational limits from strengthened social distancing rules.