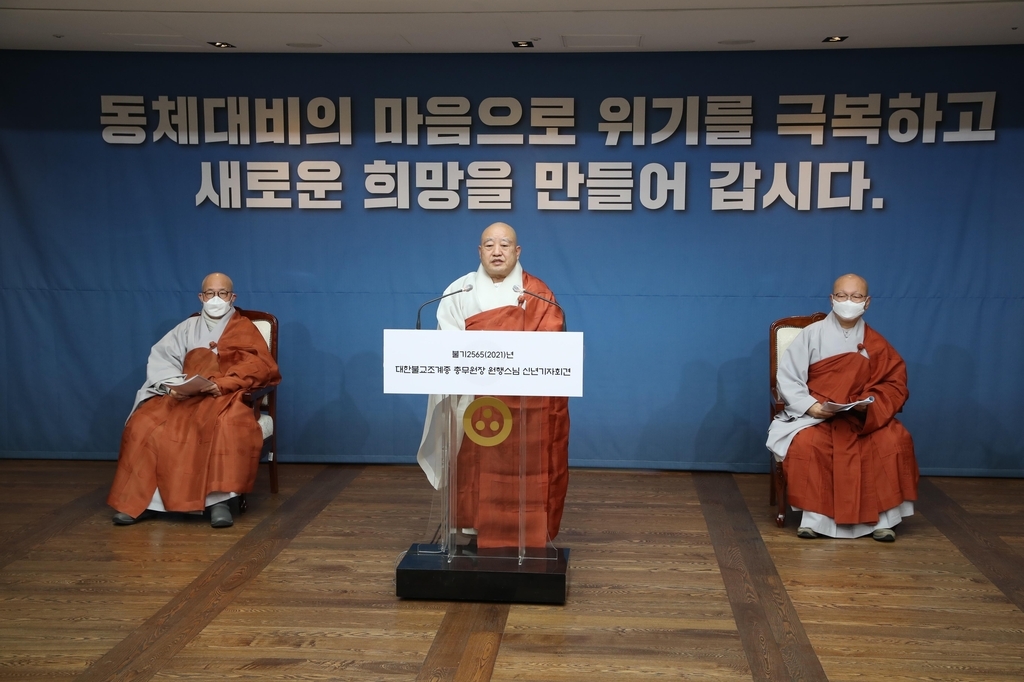 In this photo provided by Jogye Order, Ven. Wonhaeng (C) speaks in a press conference streamed online on Tuesday. (Jogye Order)
The leader of the Jogye Order, South Korea's largest Buddhist sect, said Tuesday that he will strive to promote inter-Korean religious exchanges this year by helping the North's battle against the novel coronavirus.

"We will closely confer with our North Korean counterpart on projects to facilitate exchanges and cooperation between the Buddhist communities of the two Koreas," Ven. Wonhaeng, president of the Jogye Order of Korean Buddhism, said in an online press conference. "I'll seek ways to promote peace and coprosperity on the Korean Peninsula."

As part of his plans, Jogye Order will support the sending of relief and sanitary goods for COVID-19 prevention to North Korea and launch a joint project to restore temples ruined during the 1950-53 Korean War.

It will also make constant efforts to resume some key Buddhist events that had been held annually by the two Koreas in the past.

Buddhist circles of South and North Korea had issued a joint prayer to celebrate Buddha's Birthday annually from 1997-2011. Since then, however, the two sides have failed to reach an agreement to take concerted action except in 2015 and 2018 amid the turbulence of inter-Korean relations.

Ven. Wonhaeng also expressed appreciation for the cooperation of all Buddhist believers for their participation in the nationwide efforts to overcome the coronavirus pandemic.

"Jogye Order has issued multiple orders to close temples, halt services and cancel Yeondeunghoe in a way to share the pains with our neighbors," he said, referring to the annual Lantern Lighting Festival to celebrate Buddha's birthday.

To join the country's disease control measures, the religious group canceled last year's event in May for the first time in nearly six decades. And most of its religious services have been replaced with online ones throughout the year. (Yonhap)