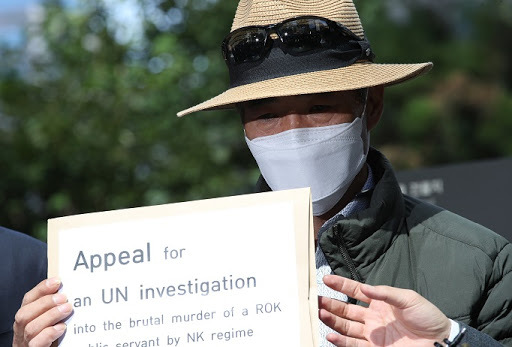 In this file photo, Lee Rae-jin, the elder brother of a South Korean official killed by North Korean soldiers while drifting in its waters, holds a petition at the UN office on North Korea's human rights in Seoul on Oct. 6, 2020, to appeal to the United Nations that a "fair and objective" probe into the killing be conducted. (Yonhap)
The government has provided as much information about its ongoing probe as possible to the family of a South Korean fisheries official killed by North Korea's military in the sea last year, a report to a UN body showed Tuesday.

South Korea made the case in the report submitted last week to the Office of the UN High Commissioner for Human Rights (OHCHR) in response to concerns that the authorities have not fully disclosed to the family the information related to the incident that took place in September.

The 47-year-old official was fatally shot by the North Korean military while adrift in North Korean waters. His brother has sought a UN probe, raising strong doubts about the government's findings on the incident that the deceased official attempted to defect to the North.

Tomas Ojea Quintana, the UN special rapporteur on North Korea's human rights situation, denounced the killing as a violation of international human rights law, and called for both Koreas to disclose all information about the case.

"In its efforts to protect the family's right to know, the Korea Coast Guard, the investigative agency in this matter, met with the victim's brother and provided important information regarding the findings of its search and investigation operations," the government said in the report.

The Coast Guard also responded to the family's "various inquiries" and "shared the progress of the investigation" through the media within the legal boundaries, as not all information about an ongoing investigation is supposed to be shared even with the direct family.

The family of the deceased official, however, rebutted the government's claims in the UN report.

"The government has never agreed to the request for information disclosure, nor has it shared information about the investigation," Lee Rae-jin, the elder brother of the late official, told Yonhap.

"I will tell the UN that this report is false and ask for a joint interrogation of me and the government official in charge," Lee said.

The family has filed a lawsuit seeking to reverse the defense ministry's refusal of the family's request for the disclosure of materials, including the audio file of a wiretapped conversation among North Korean troops during the incident.

In the report, the government stressed the need for the communication lines with North Korea to be restored, not only to prevent the recurrence of such incidents but also to enable a prompt joint response in the event of any future cases.

It added that the inability to remotely contact the North Korean side after the incident was "a fundamental challenge" in the handling of the incident, which left the government reliant on intelligence to piece together what happened.

To prevent similar cases, the government said it is working to revise its contingency manuals to enable a faster interagency response and requests for cooperation from North Korea by reviving the communication channels, according to the report.

The inter-Korean communication lines remain severed after the North blew up the joint liaison office in the border town of Kaesong in June last year in anger over the flying of anti-Pyongyang leaflets into the North by North Korean defectors and activists.

The North has apologized over the official's killing but has given no response to Seoul's calls for a joint probe. (Yonhap)