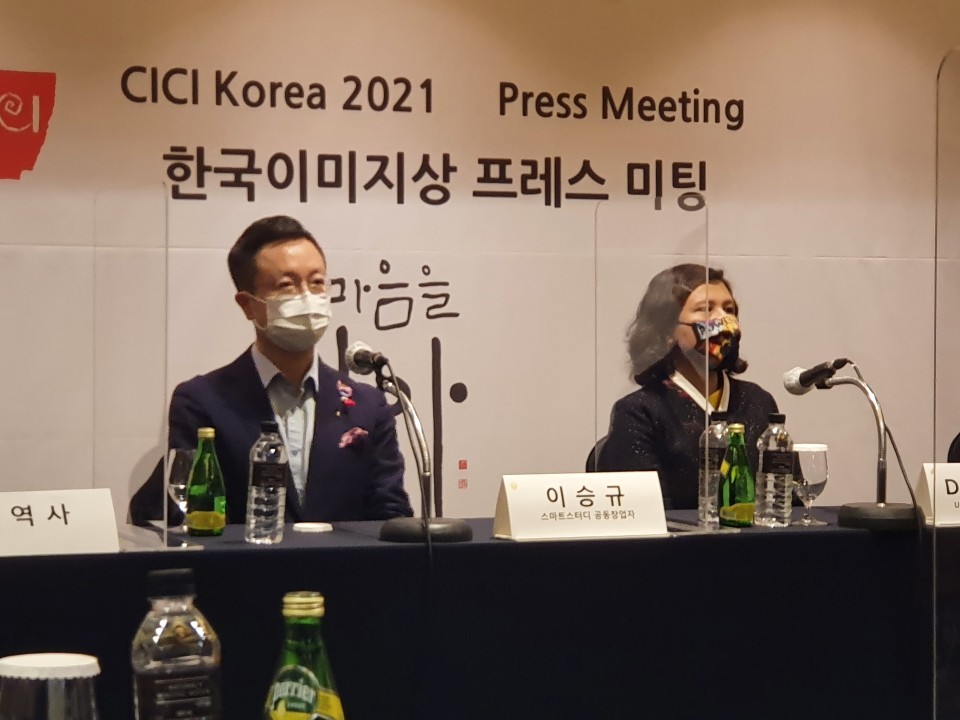 O and creator Lee Seung-gyu were presented with the awards at the 2021 Corea Image Communication Institute Awards Ceremony at InterContinental Seoul COEX on Thursday. Since 2005, CICI – a nonprofit organization -- has honored cultural figures, organizations or those who made significant contributions to raising awareness of Korean culture around the world. 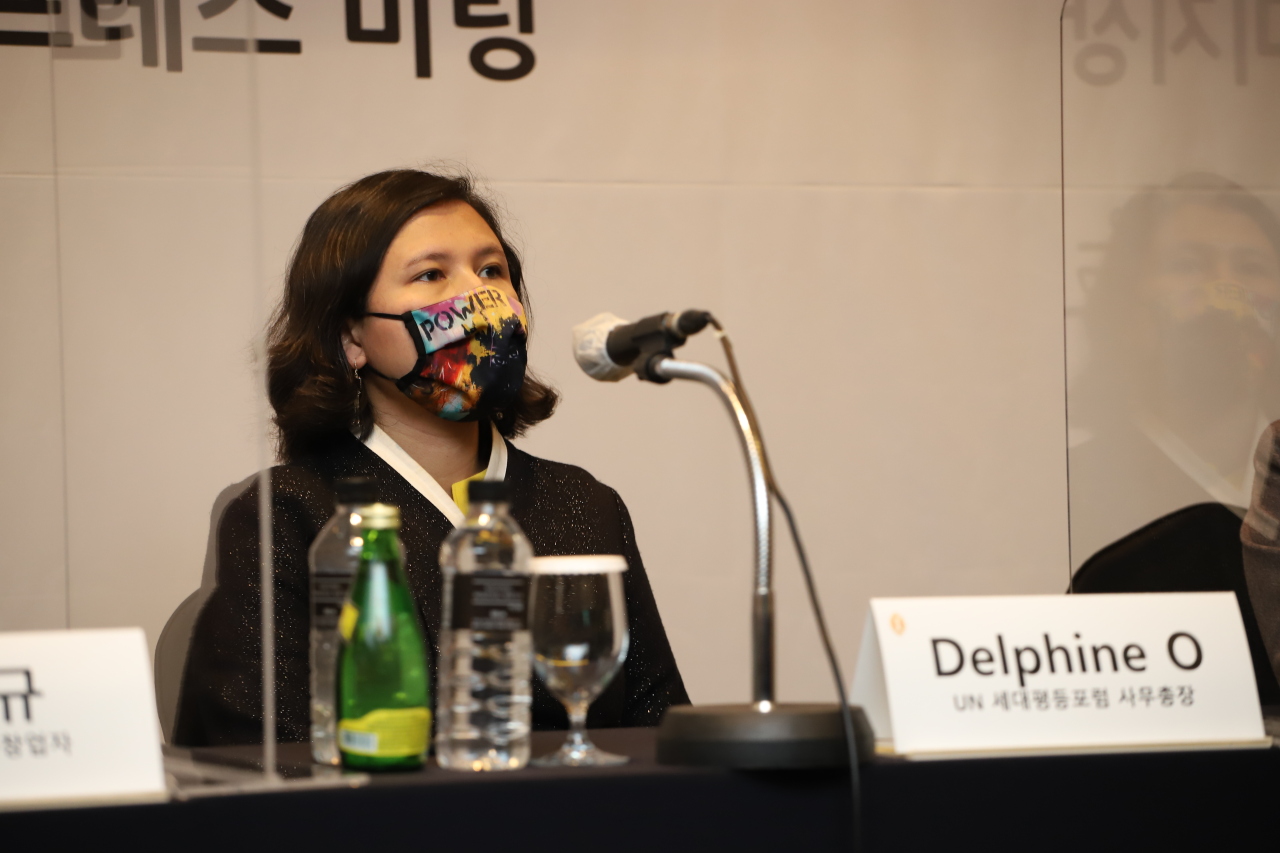 Secretary-General of the UN Generation Equality Forum Delphine O (CICI)
“I’m very grateful for receiving this award, I’ve been following the CICI ceremony for a number of years and have attended a couple already so I am extremely honored. I think it’s especially important because it is the Stepping Stone Award and as a diplomat my job is to create bridges between people,” O said during a press conference held before the gala event. “I am very proud of my Korean heritage and culture.”

O, in her speech, also brought up the issue of how COVID-19 has exacerbated gender discrimination.

“Women are pressured to do both household work while working at home,” said O. “Also, those suffering from domestic violence cannot go outside and call for help.”

She went on to expand upon issues Korean women face in balancing their career and personal lives.

“Korean women are still unable to juggle between raising children and work,” said O. “Women tend to be more willing to adapt to change than men. Korean men need a change in perception and support women’s career more actively.” 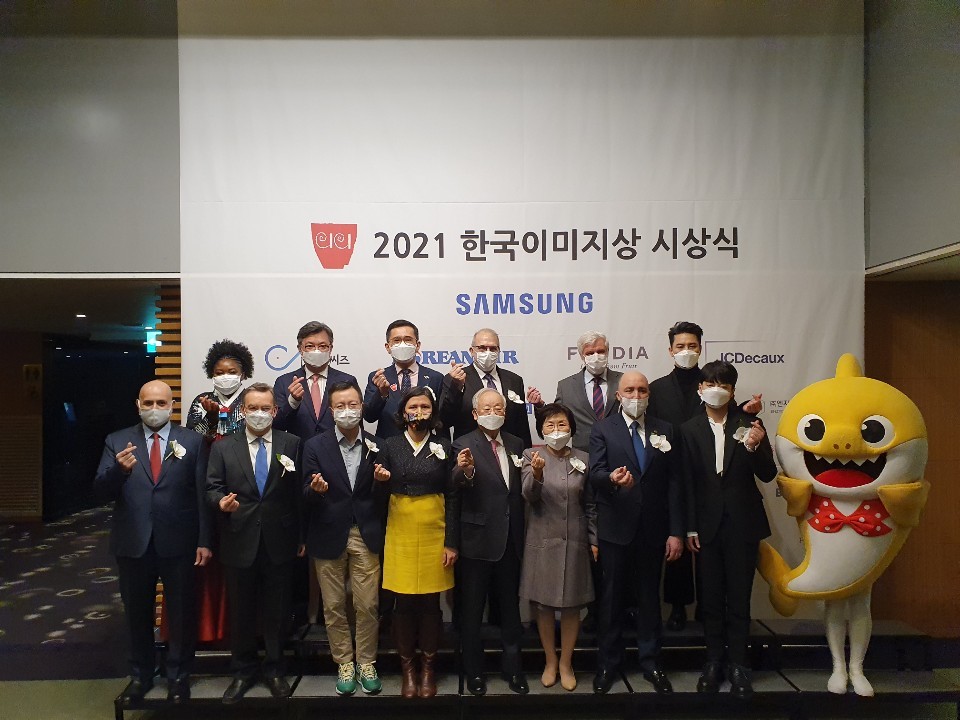 Participants at the 2021 Korea Image Awards Ceremony on Thursday (Lim Jang-won/The Korea Herald)
Popular character Baby Shark, made famous by its catchy children’s song, won the Korea Image Budding Youth Award, given to those under 20. The Baby Shark Dance video currently has over 7.6 billion views and remains the most-watched video on YouTube since Nov. 2. Lee Seung-gyu, co-founder of SmartStudy that created Baby Shark, shared his thoughts on receiving the award on Thursday.

“With COVID-19, the number of video plays and the duration of watching videos has increased proportionally with children staying longer hours at home. So the consumption of content like Baby Shark has increased. What’s more important is that in the media industry, the rich get richer while the poor get poorer. Those that are loved by children have a snowball effect while those that don’t have a hard time,” said Lee.

Lee said he was honored that Baby Shark was being included as part of the Korean 4Bs -- BTS, Blackpink and director Bong Joon-ho -- Korean individuals and groups that have contributed to the rise and spread of Korean culture worldwide. He hoped the category would expand further and that Baby Shark would one day be included among the 9Bs and 10Bs of Korea.

“I hope, like the name Budding Youth Award, SmartStudy can help children grow, like how buds grow into a tree and eventually become part of a forest, more joyfully and meaningfully with our content,” Lee said.

“Baby Shark seized the opportunity that opened up with YouTube. New opportunities arise when new platforms are opened,” he said. “We need to be able to quickly decide what are the opportunities and need to adopt, carry forward and make it happen. Secondly, companies need to make innumerable tries at creating content. For that to happen, there needs to be room for failure.”

Baby Shark’s catchy tune is not its only reason for success, he said, pointing towards how the accompanying dance moves in the video had enabled families to spend quality time together.

“A lot of things these days are called K-content, K-drama and K-food, but I hope the K disappears someday,” Lee said. “I hope we gain the confidence and think of the content that we make as global and sets an example as a global standard.”

SmartStudy has created a show on Baby Shark in collaboration with Nickelodeon, which will be shown starting first half of the year, Lee said. The company plans to focus on promotions in North America this year. The TV series will be key to maintaining the longevity of Baby Shark, according to Lee.

“After seeing the lists of award winners for previous years, I am humbled. I think we received this award because we helped trot music shine at a time when everyone was suffering from COVID-19. We will take it as a message for us to keep on singing songs of condolence and hope,” said Lee Chan-won, one of the finalists. “Moving forward, we want to show trot to the world.”