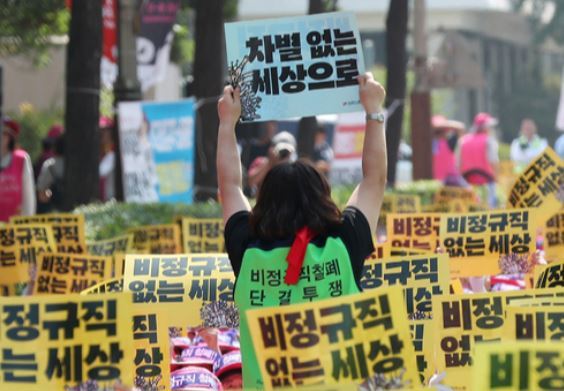 Job statuses in the nation are commonly divided into regular jobs with permanent contracts and strong protections for workers, and nonregular jobs such as temporary jobs, contract jobs and other forms of works with lower job security.

Compared to 32.4 percent in 2015 during the previous Park Geun-hye administration, the percentage of nonregular workers has climbed sharply over the past five years, while the number has grown by more than a million.

There were 6.3 million nonregular workers in 2015.

President Moon Jae-in, who took office in May 2017, had pledged to convert as many nonregular jobs into regular jobs as possible, particularly in the public sector.

But Statistics Korea data showed that, ironically, the growth pace was the fastest in President Moon’s hometown area -- Busan, Ulsan and South Gyeongsang Province -- and his party’s stronghold of Gwangju. 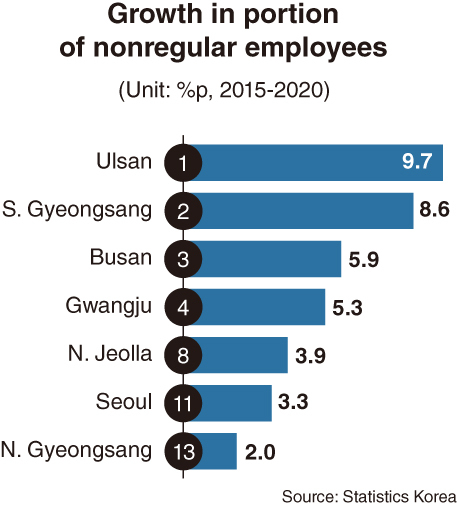 (Graphic by Kim Sun-young/The Korea Herald)
Ulsan topped the list among the 17 major cities and provinces in growth, as the portion of nonregular employees surged 9.7 percentage points over the past five years to 34.3 percent in 2020.

The Busan-Ulsan-South Gyeongsang area, whose collective population reached 7.86 million as of December 2020, takes up 15.1 percent of Korea’s population.

The growth pace was also fast in major cities: Gwangju ranked fourth among the nation’s 17 areas with a 5.3 percentage point increase to 40.8 percent.

Gwangju has shown the highest portion of supporters of the president, alongside neighboring South Jeolla Province.

The portion was the highest in Gangwon Province at 45.8 percent though the increase stayed at 0.8 percentage point in the region. Among the next rankers were North Jeolla Province at 44.1 percent and Jeju Province at 43.8 percent.

North Chungcheong Province is the only region among the 17 whose nonregular job percentage declined (by 0.5 percentage point), although Sejong was excluded from the five-year period comparison as data for the city’s was not compiled until 2017.

There was also a significant gender divide. The nonregular worker portion among the female workers reached to an all-time high of 45 percent in 2019 and 2020.

This contrasts with 40.2 percent in 2015, when the tally for nonregular workers was 3.4 million out of a total 8.46 million female workers.

They claimed that the government has applied “a fresh standard,” set by the Switzerland-based International Labor Organization.

But this only accounts for a minority of the increase during the 2015-2020 period.