As the auto industry shifts to electric and self-driving cars, auto parts makers are no longer mere suppliers. They have become a key driving force behind market innovations.

In this transition, South Korean companies are coming out of the shadows of compatriot brands Hyundai and Kia to become global players, taking aim at the worldwide automotive parts and components market which is expected to reach $2.4 trillion in 2024 from last year’s $1.9 trillion.

This year’s all-digital Consumer Electronics Show has provided a perfect venue for the companies to showcase their latest technologies and products. 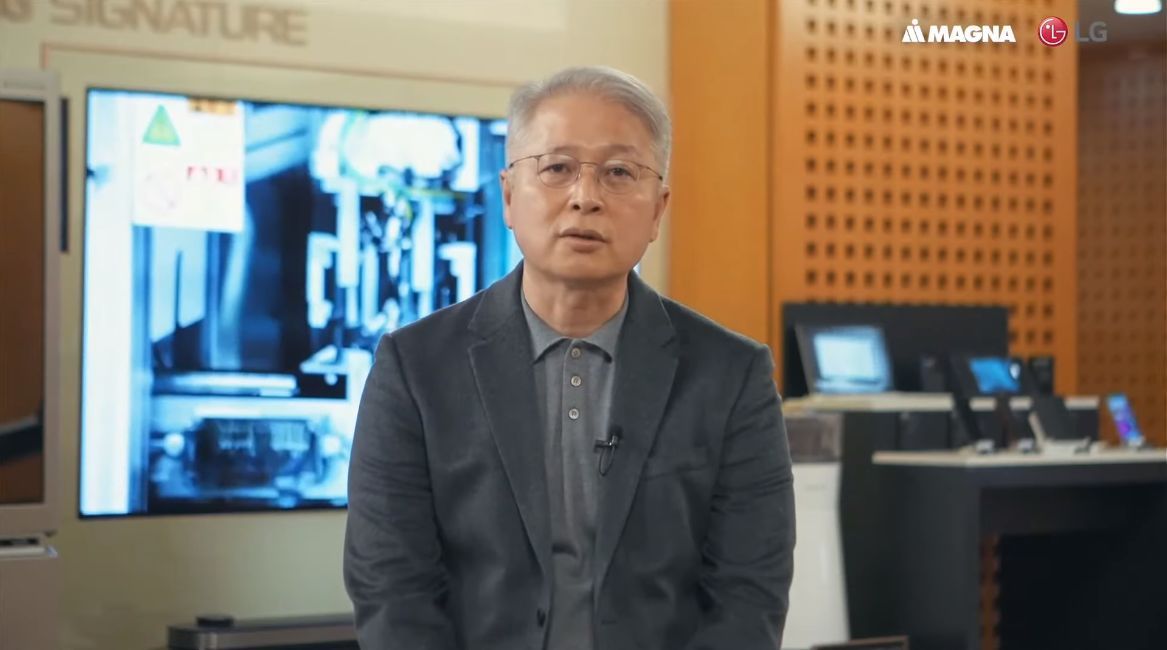 At a spotlight session held by Magna at the annual tech tradeshow on Wednesday, Magna said the $1 billion joint venture will allow Magna to achieve a vertical integration of supply chain for its key product powertrain.

James Tobin, a senior director at Magna, said LG Electronics’ massive production capacity of e-motors and inverters in Korea and China will help Magna to cut production costs, as the two components take up 70 percent of total costs of a powertrain.

A powertrain is a platform that consists of the power source and all of the components that convert the power of engine -- or motor in case of an EV-- into the movement of vehicle. Simply put, a powertrain is a producer, converter and consumer of energy with the aim of getting the vehicle to move.

For LG Electronics, which is currently supplying its products to General Motors and Jaguar Land Rover, the joint venture is expected to help the company secure potential customers in the future.

If one of the global clients of Magna wishes to transition to an electric vehicle, the client will be added to the customer list of the joint venture, Tobin added.

When asked how LG Electronics’ products will be used for Magna’s powertrains, Ron Frawley, senior director of corporate strategy and planning, provided an EV currently being developed by Magna as an example. The powertrain on Magna’s EV uses LG products and targets for a power output of 250 kilowatts, Frawley explained.

The senior director further added that the joint venture will allow Magna to reduce costs as well as the lead time for the development and mass production of powertrains. 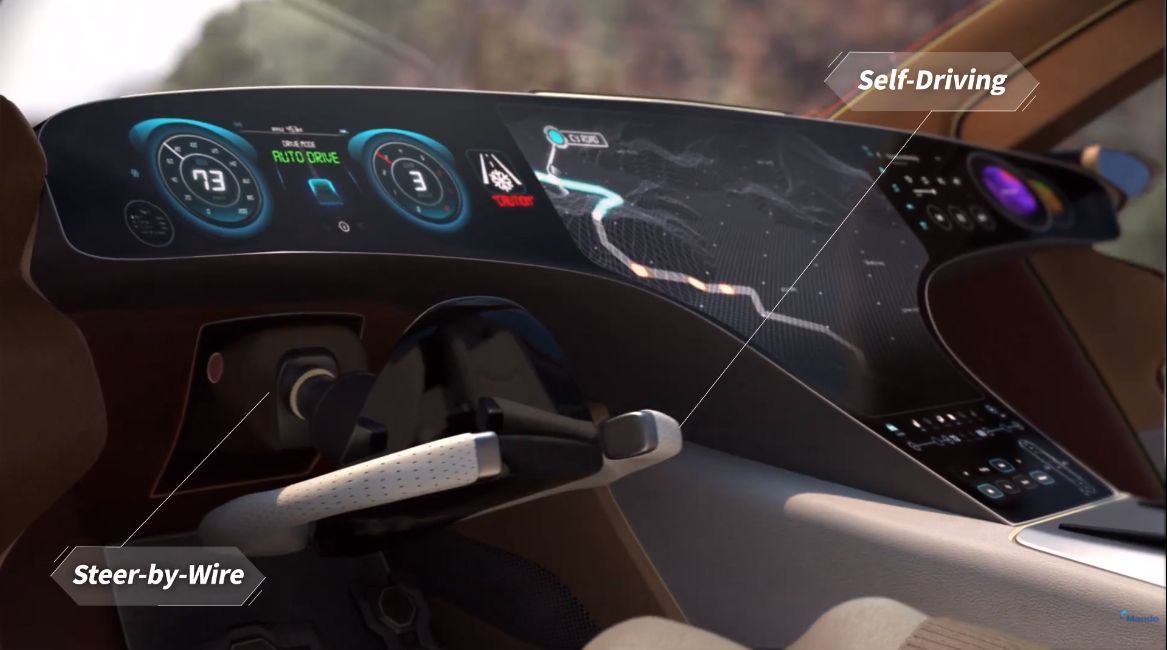 South Korean auto parts maker Mando, who logged a revenue of 5.98 trillion won ($5.45 billion) in 2019, showcased its “X-by-Wire,” an electric hyper-connectivity technology that enables the flexible design of a vehicle at CES 2021.

Mando’s Steer-by-Wire solution eliminates the mechanical connection between the steering wheel and road wheels, and performs the steering function only by the electric signals conveying the intention of the driver.

The SbW offers an “auto stow” function, which allows the steering wheel to fold under the dashboard to maximize the driver’s in-cabin space during a self-driving mode.

Mando’s X-by-Wire technology also applies to its brakes. The Brake-by-Wire solution, connects the break to each of the four wheels, and works purely by electric signals, making conventional mechanical parts unnecessary including brake boosters, parking cables and engine oil tubes.

In addition, Mando introduced a chainless electric drive system for micro-mobility. The system, dubbed SPM (smart personal mobility) module, can adjust the motor power, pedal torque or pedal speed of an electric vehicle such as electric bicycle without a mechanical connection like a chain or a belt between a pedal and wheels. 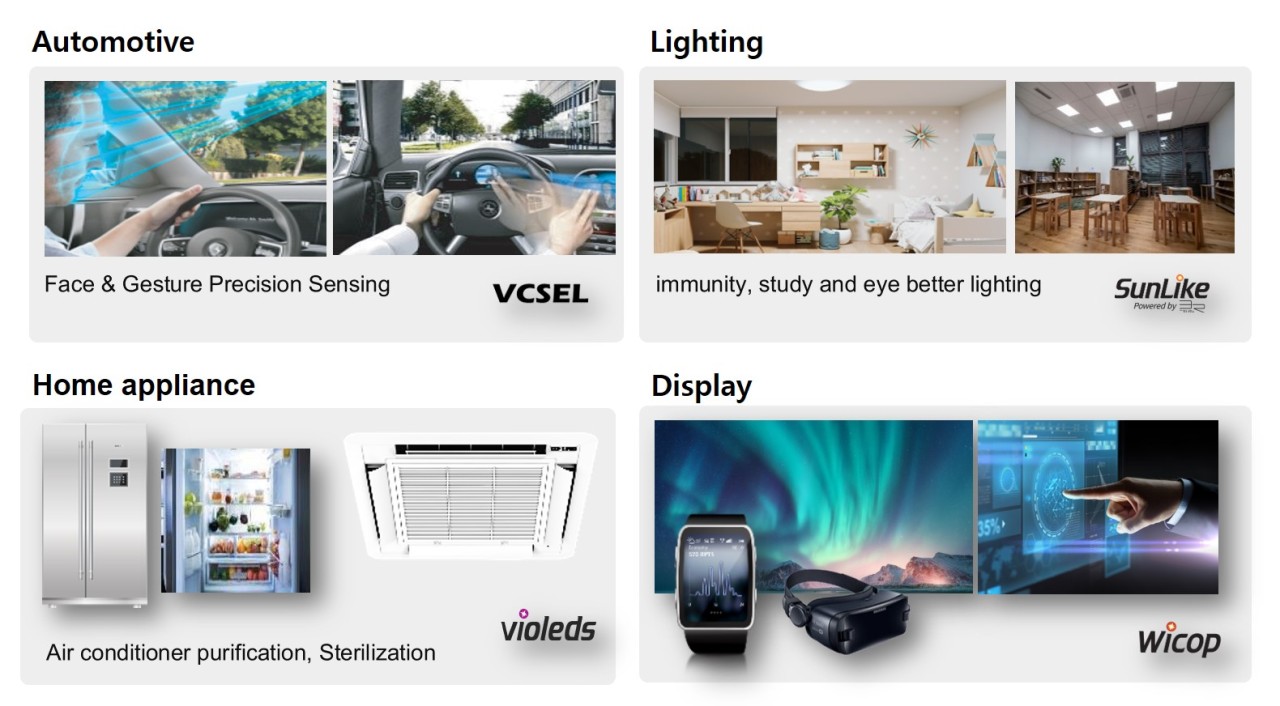 Korean light-emitting diode maker Seoul Semiconductor, which enjoyed a revenue of 1.1 trillion won in 2019, participated in CES 2021 with its subsidiary Seoul Viosys to introduce next-generation LED technologies that can be applied to displays, cars, consumer electronics and illumination.

Short for vertical-cavity surface-emitting laser, VCSEL is basically a sensor that shoots an array of invisible infrared laser sources with columns and rows to facilitate in-depth 3D detection. These reflected beams are received as a point cloud from which an image of the surroundings is then calculated. For such function, VCSEL has emerged as a dominant approach for 3D sensing for autonomous vehicles.

At the show, Seoul Semiconductor said it aims to utilize VCSEL technology not only for the object detection but also for the precision sensing of the driver’s face and body gestures to enable safe autonomous driving.

Seoul Semiconductor said it will introduce additional patented VCSEL products in the near future. 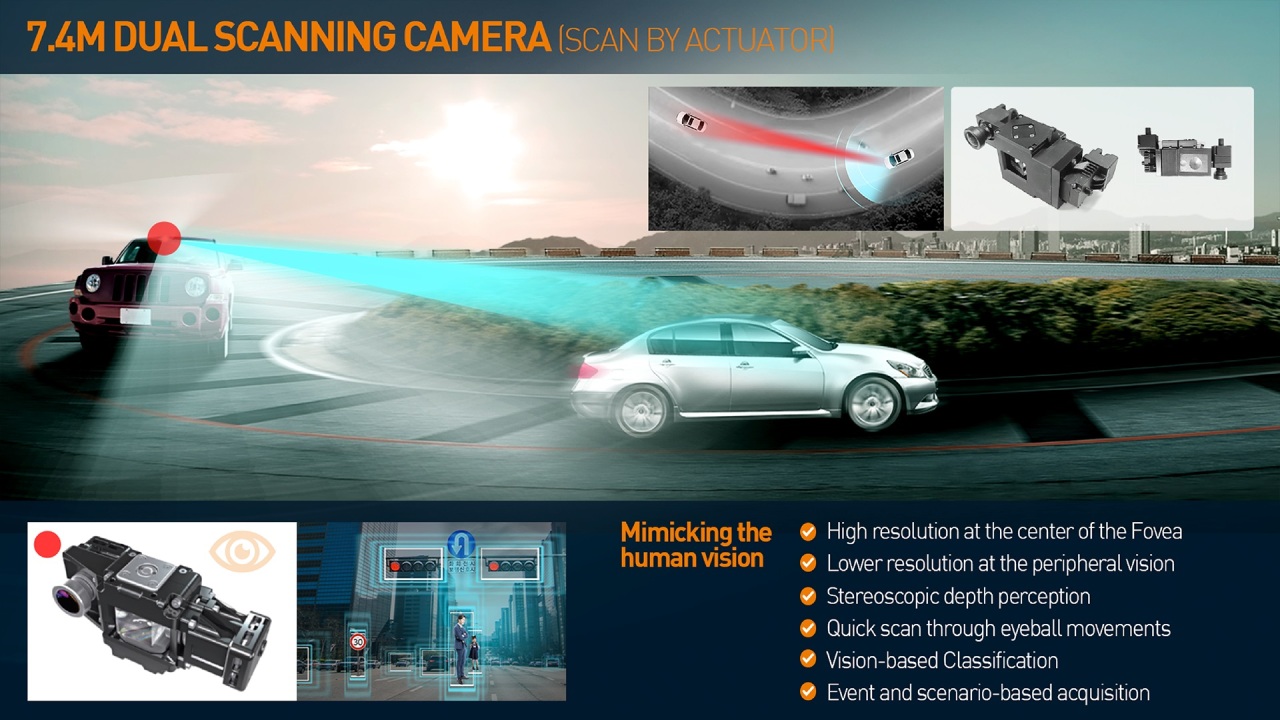 MCNEX’s advanced driver assistance system, or ADAS, is comprised of a 7.4-megapixel dual-scanning camera technology and Corephotonics actuator. The two cameras, which are designed to mimic a human vision, are equipped with a quick scan function through eyeball movements, enhancing self-driving experiences on the crossroads and curves.

The cameras are supported by Corephotonics’ actuator, which shifts the lens in one direction to compensate for shakes along that axis and tilt the prism in the other direction to mitigate shakes along the second axis. Simply put, the actuator increases the exposure time and keep the image sharp.

“For self-driving technology, ‘fixed’ cameras are currently being used, but with those cameras, when a vehicle makes a turn, it’s difficult to spot objects at the vehicle’s flanks. However, MCNEX’s dual camera technology raises the detection rate of objects that are more than 250 meters away on crossroads or curves,” a company official said.