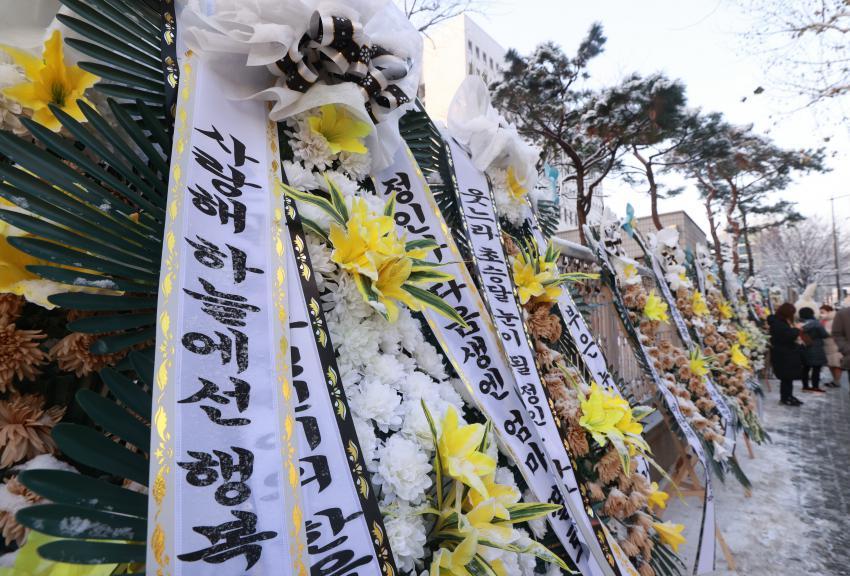 A row of funeral wreaths made of white and yellow flowers is laid alongside the wall of the Seoul Southern District Court on Wednesday. (Yonhap)
Prosecutors on Wednesday pressed murder charges against a woman who allegedly abused and killed her 16-month-old adoptive daughter in October, as the trial opened in the nation’s latest high-profile child abuse case.

The child -- publicly known as Jeong-in, the name given to her by her birth mother -- died Oct. 13 at a hospital in southwestern Seoul.

Prosecutors had initially indicted the 34-year-old mother, identified by the surname Jang, in December on the lesser charge of child abuse resulting in death. The adoptive father, surnamed Ahn, is also on trial on child abuse charges. The murder charge was requested only for the mother, who has been in detention since November.

The new charge came after a reexamination by forensic experts, who said Jang had most likely intended to kill the child or at least been aware of the possibility that her actions could cause death. The doctors who performed the autopsy said in their view it was willful killing or murder by recklessness. An initial autopsy revealed that Jeong-in died from severe injuries to her pancreas and a torn mesentery, the organ that attaches the intestines to the abdominal wall.

The Korean Pediatrics Society said in a letter to the prosecution that murder charges should be brought against the adoptive parents, pointing to the toddler’s ruptured pancreas as an indication of willful injury, as opposed to an accidental fall as claimed by Jang. During the investigation, Jang is reported to have said she dropped the child and the baby hit a chair as she fell.

“We decided to have murder as a primary charge based on results of discussion with forensic examiners, and with that we are submitting autopsy results and opinions from the medical examiner in charge.”

Jang pleaded not guilty to the murder and fatal child abuse charges, with her defense lawyer saying that “the defendant did not intentionally cause the victim’s death” and “did not apply any force strong enough to damage organs.”

The defense admitted to some abusive acts on Jang’s part, acknowledging that her actions may have caused fractures to Jeong-in’s clavicle and ribs, but denying she was responsible for breaking the girl’s skull and hipbone.

The case has provoked public outrage since early January, when it was the subject of a special feature on a TV news program. The show sparked an online campaign expressing remorse over the child’s death and public calls to have Jang and Ahn charged with murder.

Crowds gathered in front of the Seoul Southern District Court early Wednesday calling for murder charges and capital punishment for the accused.

TV cameras and reporters waited outside the court for Jang and Ahn, only to find that Ahn had already gone in.

More than 800 people had applied to view the trial, but only 11 members of the public were allowed in the courtroom due to concerns about COVID-19. An additional 40 people were allowed to view the proceedings from another room of the courthouse via television.

As Ahn left the courthouse after the trial Wednesday, crowds yelled and swore at him as police tried to stop press and protesters from getting too close.

Ahead of the next trial, scheduled for Feb. 17, the prosecution requested the court’s permission to summon 17 people as witnesses, including the medical examiners who had conducted autopsies on Jeong-in. Also on the list was Jang’s neighbor, who police say overheard what happened on the night of the toddler’s death.