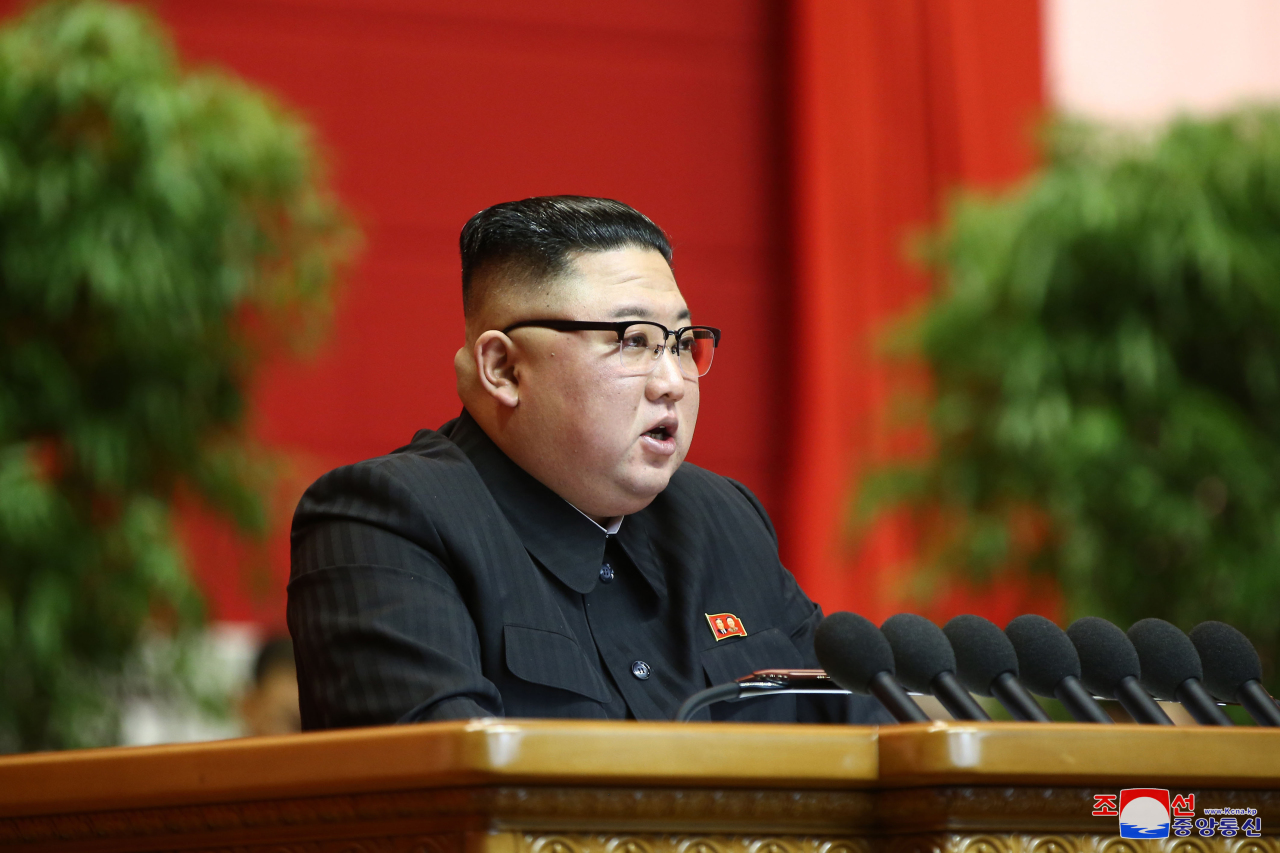 North Korean leader Kim Jong-un speaks at the closing session of the 8th congress of Workers' Party in Pyongyang Tuesday, in this photo released by the Korean Central News Agency the next day. (KCNA-Yonhap)

North Korean leader Kim Jong-un called for all-out efforts to strengthen military capabilities, including further modernization of the country’s nuclear deterrent, as he addressed the final session of the rare party congress that concluded Tuesday.

“While further strengthening our nuclear war deterrent, we need to do everything to build the strong ccapa apabilities,” Kim was quoted as saying by the state media Korean Central News Agency on Wednesday.

“By accelerating the push to make our military more elite and strong, we need to have them thoroughly prepared to play their role against any form of threats or unexpected situations.”

North Korea kicked off the eight-day Workers’ Party Congress on Jan. 5, one of the biggest political events of the country, which lays out its military goals and long-term policy direction. This year’s congress was the eighth and the second-longest in the North’s history; the fifth congress lasted 12 days in 1970.

In his first official reaction to the incoming Joe Biden administration in the US, the North Korean leader unveiled his renewed nuclear ambitions with a long list of weapons plans, including a nuclear-powered submarine, in his opening remarks of the congress last week, calling the US his “biggest main enemy.”

But he also didn’t rule out diplomacy, stressing he would “respond to force with force, and to good will with good will.” As for South Korea, he signaled things could return to how they were three years ago when a peaceful atmosphere was created, saying “it all depends on the South’s attitude.”

The North Korean leader, who opened up the event by admitting to having fallen short of achieving the goals of the previous five-year plan, also renewed his commitment to fulfilling a new five-year economic plan, urging a “do-or-die spirit” to accomplish the targets.

“The future of our socialist achievement depends on how we carry forward the decisions made at this congress including the five-year plan for national economic development,” he said, warning zero tolerance for excuses citing “special situations.”

He pinpointed the metal, chemical and light industries as the key areas to focus on in achieving the new economic goals. He also pledged to improve the nation’s food rations by ramping up procurement purchases.

While the party congress aims to outline the overall future policy direction, more concrete plans are expected to be discussed when the Supreme People’s Assembly, Pyongyang’s parliament, convenes on Jan. 17.

After the congress, Kim reportedly paid tribute at the Kumsusan Palace of the Sun, where the bodies of his father  Kim Jong-il and grandfather and state founder Kim Il-sung lie in state.

On Sunday, Kim was promoted to secretary general of the ruling party, the highest rank, previously held by the two predecessors.