Amid a heavy snowfall that hit the greater Seoul area, Kim took the baton at Lotte Concert Hall, leading the KBS Symphony Orchestra.

Kim’s concert with the KBS Symphony Orchestra was initially set to be held in December, but was postponed to January due to the spike in the number of coronavirus cases across Korea.

The postponement was an unwelcomed news, as Kim’s initial formal debut as a conductor in April with the Bournemouth Symphony Orchestra had also been indefinitely postponed.

At Tuesday’s concert, Kim appeared onstage without a baton, sitting in front of the piano, as he was to play the piano and conduct at the same time for his opener -- Beethoven’s Piano Concerto No. 2. 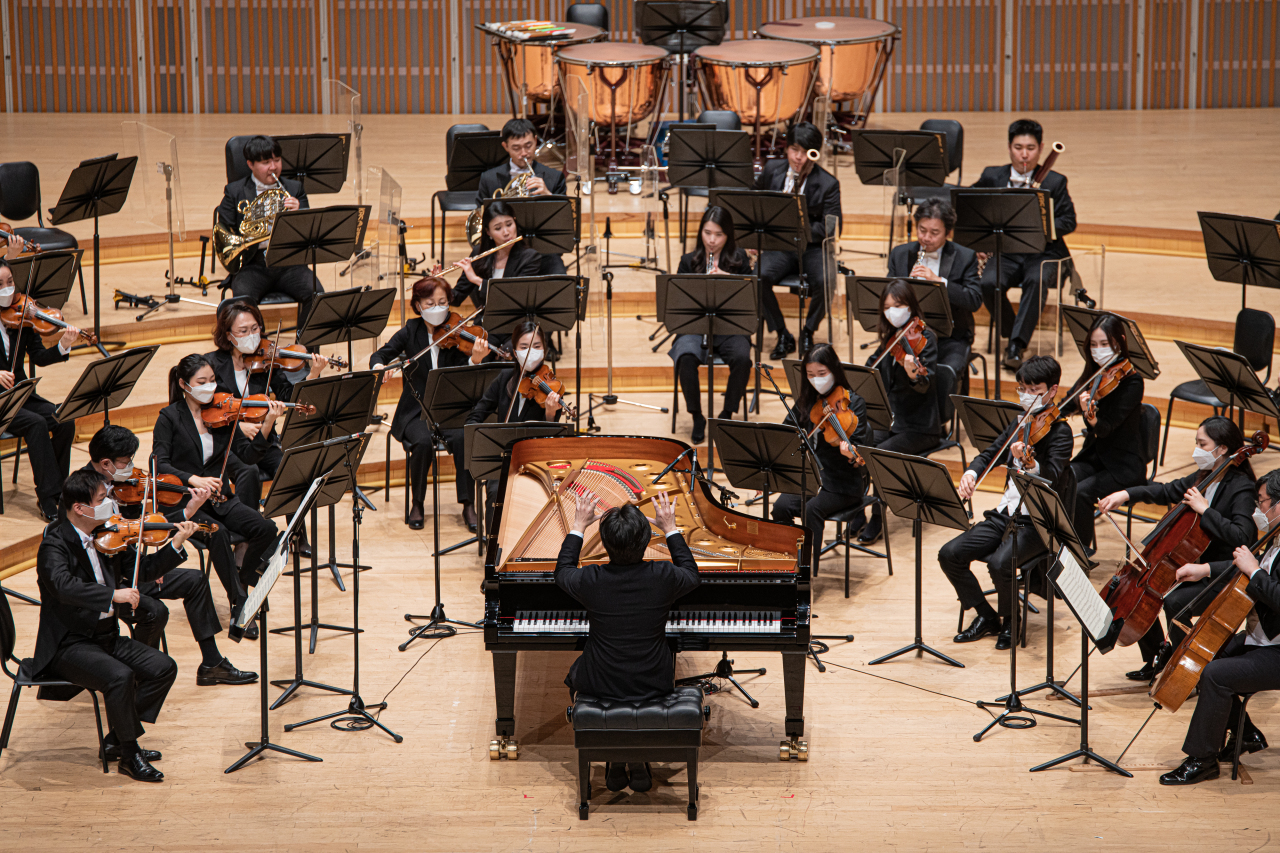 While playing the piano, Kim signaled the some 50 orchestra members with his eyes. At some moments he played the piano with his right hand and simultaneously conducted with his left.

Although Kim did not stand on the podium during the opening piece, his overflowing charisma had commanded the orchestra and captivated the audience.

After an intermission, Kim took the podium to lead the orchestra for Beethoven’s Symphony No. 7. The beloved, iconic second movement, shined under Kim’s lead.

Kim is recognized for his passionate performance on the piano. However, as a conductor, Kim delighted the audience with a different side to him, showing delicate yet powerful gestures as he guided the musicians.

At the end of the 80-minute performance, Kim, drenched in perspiration, blew kisses to the audience.

“Thank you so much for coming here today amid such heavy snowfall,” Kim said. “So this is how I begin conducting.” 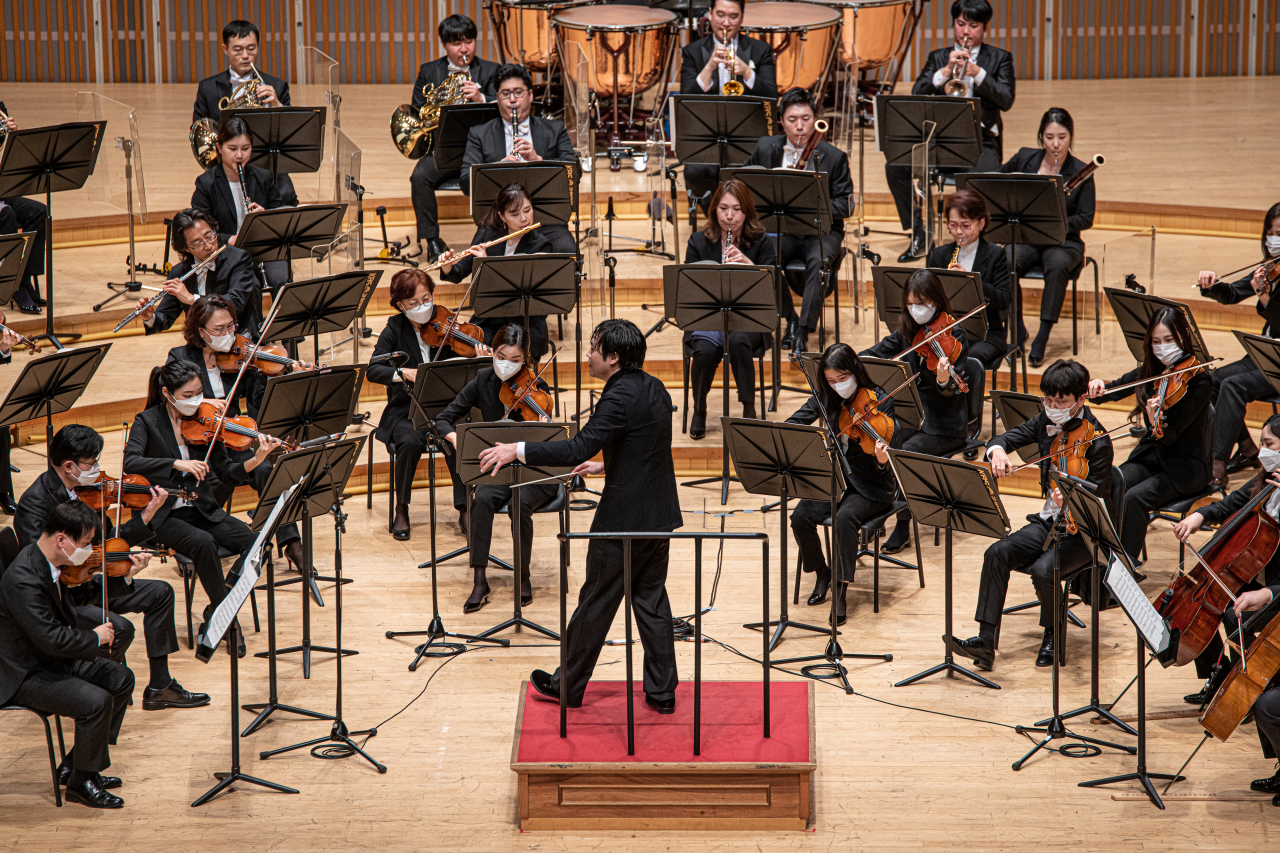 Pianist Kim Sun-wook makes his conducting debut at the Lotte Concert Hall in eastern Seoul, Tuesday. (Vincero)
Although only a third of the 3,000-seat concert hall was filled due to imposed social distancing restrictions, the sound of thundering applause reverberated around the room.

The 32-year-old pianist, who made his name as the youngest winner of the Leeds International Piano Competition in 2006, is known to have nurtured a great passion for conducting over the years.

He received a master’s degree in conducting at the Royal Academy of Music in 2013. He often describes his days there as one of the hardest times of his life, as he had to learn conducting while keeping up with his piano practices.

While Tuesday’s performance was Kim’s official debut, it was his second time taking up the baton on stage, after a brief performance with the Bournemouth Symphony Orchestra for Tchaikovsky’s “Nutcracker Pas de Deux” in 2015 during an encore.

“It was an honor for me to have my first conducting performance with the KBS Symphony Orchestra, which I have long been acquainted with,” Kim said. “It would be great (if the audience) could support me both as a pianist and a conductor.”

Kim is following in the footsteps of many other famed pianists in his foray into conducting.

Pianist Cho Seong-jin, another celebrated young pianist from Korea, made his conducting debut in September 2019 in Tongyeong, South Gyeongsang Province.

Maestro Chung Myung-whun, whom Kim often expresses great admiration for, began his music career as a pianist, too. He was the joint second-prize winner in the 1974 International Tchaikovsky Competition. He later switched over to conducting after studying at the Juilliard School and eventually became one of the most celebrated conductors from Korea.

Prior to Tuesday’s concert, Kim held a solo recital on Monday which had been postponed for nearly a year. For his next recital, he is set to pair up with violinist Chung Kyung-wha where the two will perform the complete Brahms violin sonatas on the coming Tuesday at the same venue.