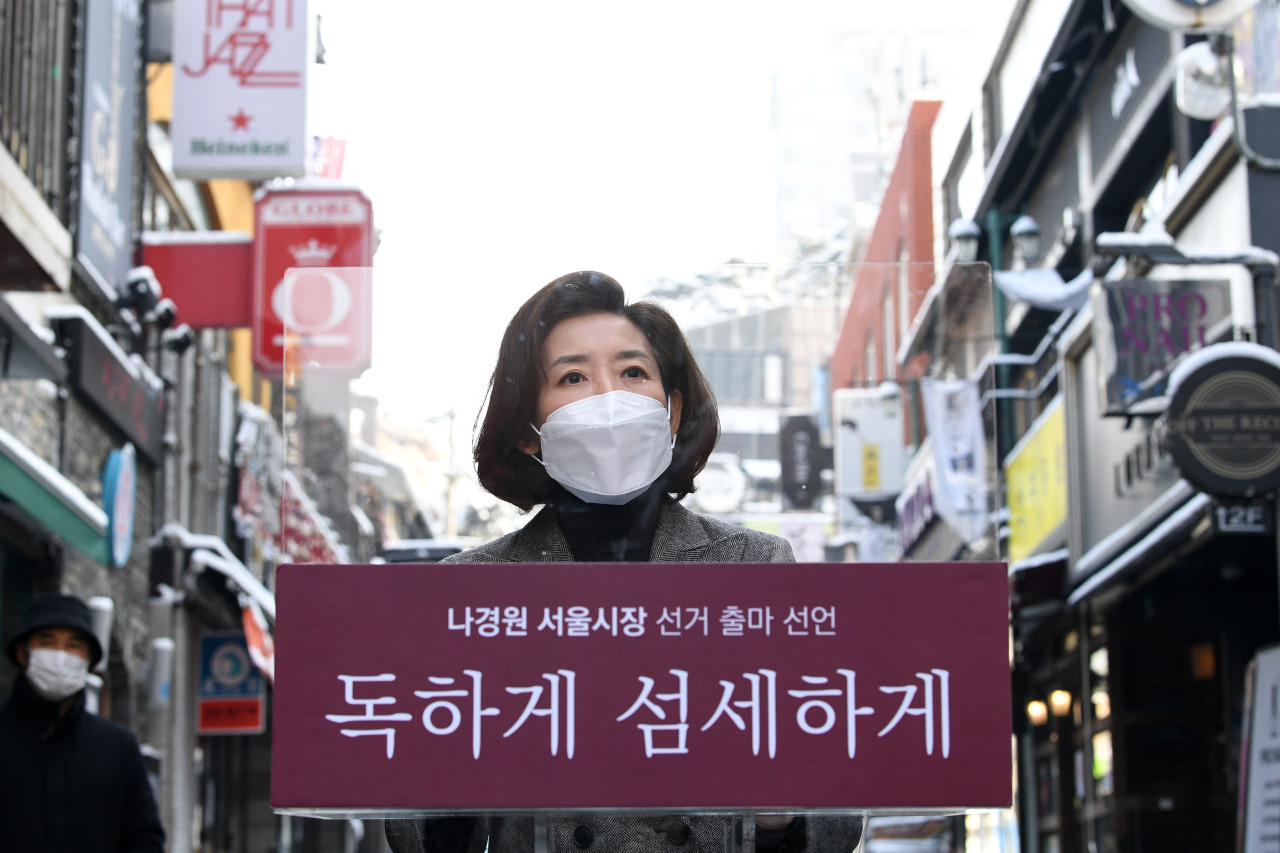 With Na announcing her bid, the battle from the opposition bloc is solidifying into a three-way race with head of the minor opposition People’s Party Ahn Cheol-soo and Oh Se-hoon, who was mayor of Seoul from 2006-2011. Ahn joined the race last month and Oh has vowed to run if Ahn does not join the main opposition party People Power Party.

So far, the setup is a repeat of the 2011 Seoul mayoral by-election, when Ahn and Na were favorites for the post left vacant after Oh resigned. At that time, Ahn chose to endorse then-lawyer Park Won-soon, who went on to win and serve into his third term until his suicide last year.

Announcing her candidacy in Yongsan, Seoul, on Wednesday, Na focused on the shortcomings of the ruling bloc and pledged to “rebuild Seoul with a strong determination and delicate policies.”

The judge-turned-politician served four terms in the National Assembly, and was the first female floor leader of the conservative main opposition Liberty Korea Party -- predecessor to the current People Power Party.

”It (the ruling party) betrayed the expectations of the people. Moreover, Seoul lost its leadership even on the charges of sex crimes by the former mayor amid the coronavirus crisis,” she said.

Na made pledges to operate a COVID-19 vaccination shuttle bus, to relax regulations on real estate and to provide a 6 trillion-won ($5.4 billion) emergency relief fund.

“The challenge as important as getting a vaccine is prompt, fair and orderly vaccinations,” she said, vowing to operate vaccination shuttle buses all over Seoul to get people vaccinated in front of their houses and in the underground parking lots of apartments.

“We will secure additional beds and medical personnel for serious patients to prevent overloading the medical system and share the pain of medical workers,” she said.

In order to avoid the poverty trap, she says she will introduce a Seoul-style basic income system, saying there will never be people living without the minimum costs in Seoul.

“We will set up a 6-trillion won emergency relief fund to lend funds for emergencies at ultralow rates and minimize unfair closure and unemployment.”

As for the housing shortage problem, she pledged to remove old regulations such as floor space rates, usage area and floor height limits to supply more homes. “The reconstruction and redevelopment that was blocked will be reopened on a grand scale.”

She also vowed to make Seoul an artificial intelligence hub. “Seoul, the capital of Korea, the most powerful country in information technology, is well qualified to become the world’s technological and innovation capital leading the era of the fourth industrial revolution,” she said.

“Like the tourism mecca of Paris and finance hubs of Singapore and Hong Kong, Seoul will become an AI hub city.”