The rhythmic moombahton number fronts the band’s fourth EP, “I Burn,” which follows debut EP “I Am” and later editions in the series “I Made” and “I Trust.”

The self-produced “I Burn” credits all six members as either composers or lyricists, with band leader Soyeon taking the helm of the overall creative process.

“Hwa” touches upon the various emotions surrounding a breakup, from the initial sadness and regret to overcoming it. The song comes after the single “DUMDi DUMDi” from August last year. 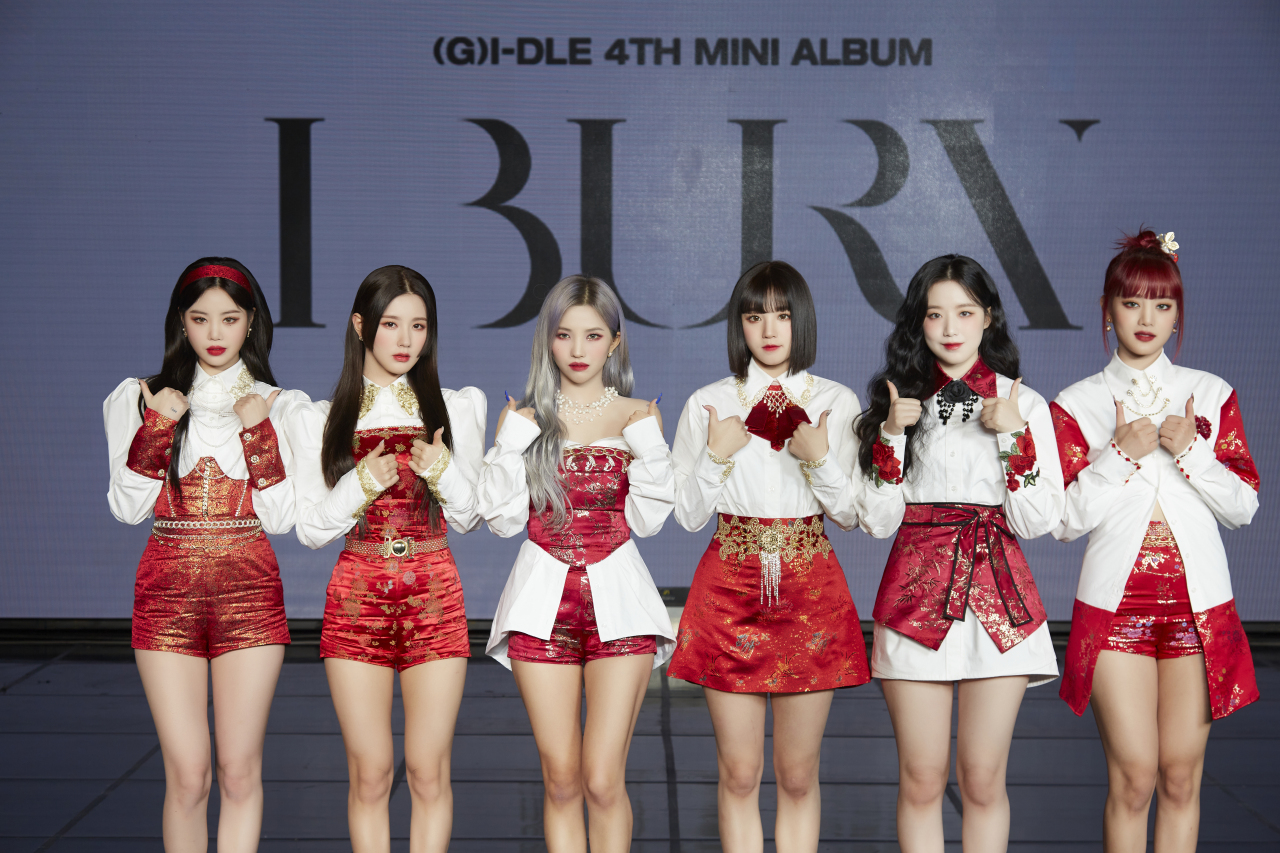 (Cube Entertainment)
“When making ‘Hwa,’ I focused on that certain emotion, trying to figure out whether it was a lingering feeling or regret. I especially thought about a woman caught up in cold winter when picturizing the song’s concept. Then I wanted to melt that coldness with fire and make it bloom into flower,” explained Soyeon during the group’s press showcase for the new album in Seoul on Monday. Soojin added that “Hwa” might sound like an extension from the group’s previous single, “Hann,” but it relays a different feeling.

Soyeon continued, “As all of us are musicians, we thought expressing our emotions was the most important thing than embodying a certain concept. I think all of us have similar thoughts on breakup and I wanted to deliver them like a novel.”

“Since I am from Thailand, it was hard to understand that exact emotion at first. But after talking with bandmates, I got to understand it,” Minnie added.

Upon making its debut under Cube Entertainment in May 2018 with its first EP, “I Am,” and single “Latata,” (G)I-dle made the bold declaration that it hoped to be a one-of-a-kind idol group in Korea. The multinational sextet consisting of members from Korea, China, Thailand and Taiwan is one of the few girl groups to see both its debut single and its debut album on the Billboard charts.

The promising band kept up its winning streak with a steady string of chart hits. With songs like “Hann,” “Senorita” and “Uh-Oh,” the band expanded its sonic scope to house, Latin and old-school hip-hop. The band’s main rapper -- Soyeon, who’s proved her musical prowess through “Produce 101” and “Unpretty Rapstar,” took the helm and created most of the group’s songs. This is rare for a K-pop girl group, most of which perform songs by other songwriters.

Asked about their goals for this year, the bandmates said they were desperate to meet their fans face to face in this COVID-19 phase.

“Since our scheduled world tours have been canceled, revamping the tour would be our utmost goal. Aside from that, we would like to top local streaming charts with ‘Hwa,’” said Soyeon.

Miyeon added, “We’ve been storing this song for a year. We are really happy to finally unveil it. Please enjoy it.”