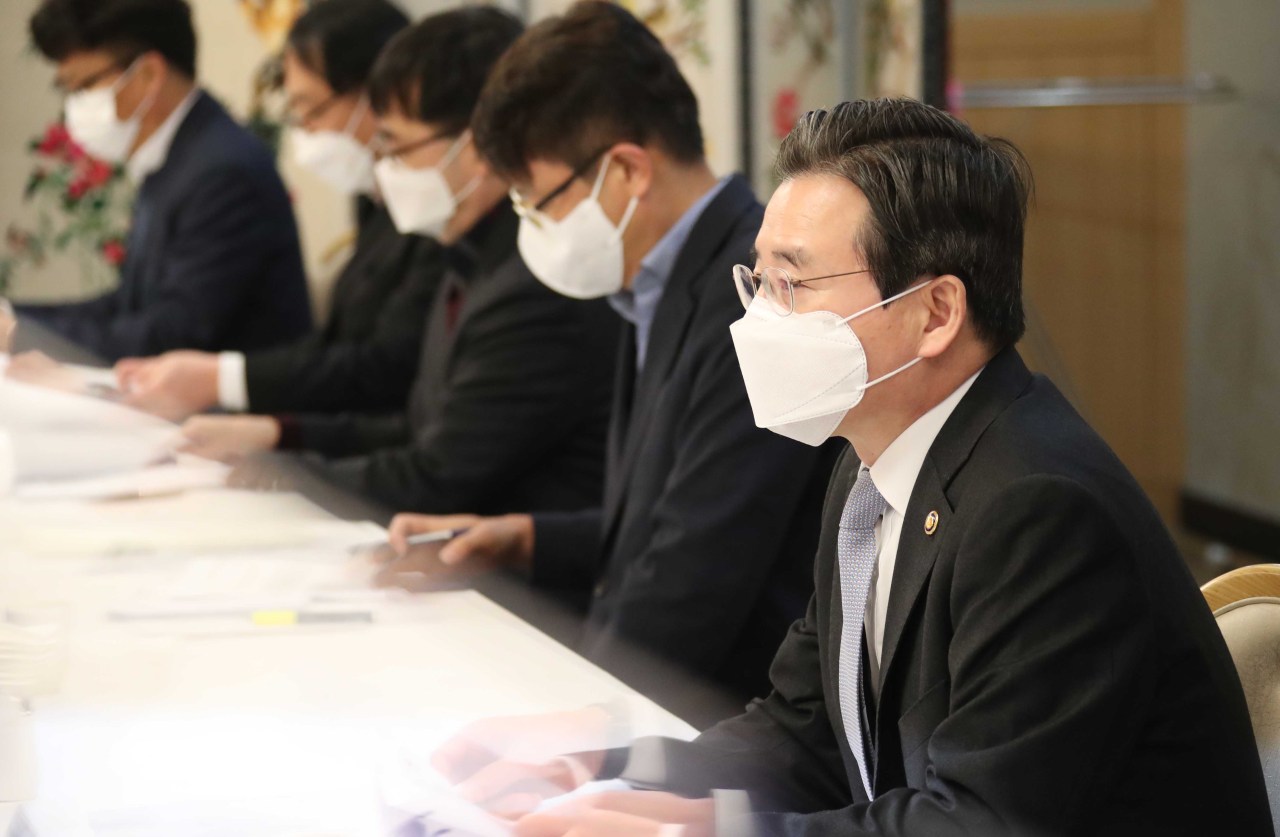 Vice Finance Minister Kim Yong-beom speaks during an economic meeting to discuss the government’s strategies for innovation-driven growth as well as the New Deal policy, held Friday at the government complex in Seoul. (Yonhap)

The South Korean government plans to create 1.04 million new jobs in the public sector in an effort to tackle the pandemic employment shock, according to the nation’s first vice minister of finance Friday.

“To offer job opportunities to low-income households and young job seekers hit hard by the COVID-19 crisis, (the government) aims to create 1.04 million state-backed jobs by the end of this year, which is up nearly 10 percent from the previous year’s job-creating projects,” Vice Finance Minister Kim Yong-beom said in an economic meeting.

Due to the prolonged COVID-19 crisis, the number of employed people decreased for the ninth consecutive month in November last year, which marked the longest job-losing streak since the 1997-98 Asian financial crisis, industry data showed.

“Under the envisioned plan, the authorities will speed up efforts to add 800,000 new jobs in the public sector during the first quarter,” Kim added.

"(The government) will also work on increasing job openings at public institutions to support young job seekers. Details of this scheme will be announced later this month.”

The new state-backed job posts will be mainly created in the tech and green energy sectors, in line with the Moon Jae-in administration’s New Deal initiative to boost employment and future growth engines in the green and digital areas, the Finance Ministry said.

The number of employed people is forecast to increase by 150,000 by the end of this year, a turnaround from job losses of 220,000 estimated last year, it added.

Kim also said the government will invest a combined 1.8 trillion won ($1.6 billion) to foster new growth engine industries by 2025, including self-driving cars and drones, as well as to apply so-called “digital twin” technology to land management. This refers to a computer program showing virtual representations of physical assets such as land or construction sites, which uses real-world data to make simulations that can predict how a product or process will perform.

“Along with the investment, (the government) will come up with a series of legal frameworks this year to allow local companies to employ innovative technologies in their businesses,” he said.