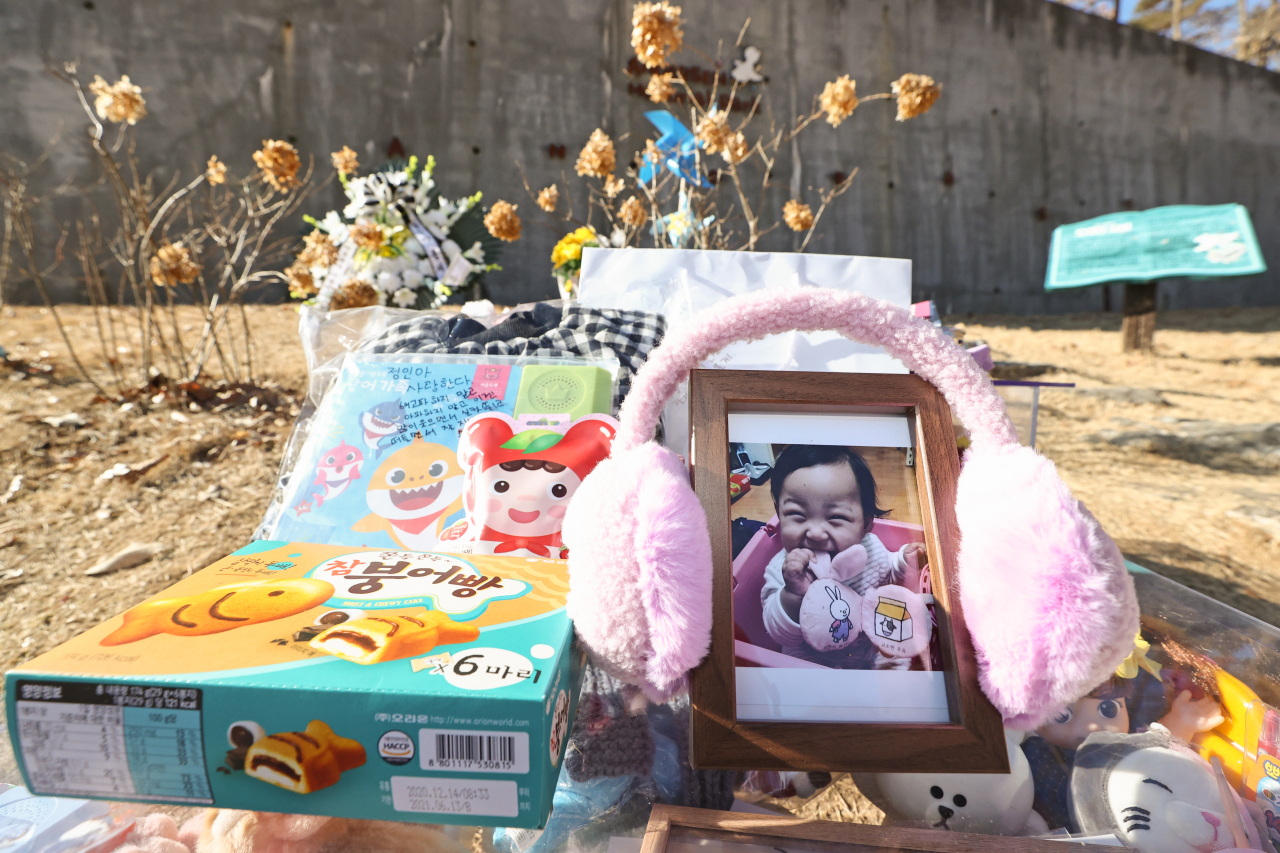 Mourning citizens place gifts and flowers on the toddler`s grave in Yangpyeong, Gyeonggi Province. (Yonhap)
The president of the Korean Pediatrics Society, Dr. Lim Hyun-taek argued murder charges should be brought against the adoptive parents of a toddler who died in October last year of suspected abuse, citing “clear signs of intentional trauma.”

The pediatrician of 20 years pointed to the 16-month-old’s ruptured pancreas as a key indication of willful injury, as opposed to an accidental fall as claimed by the adoptive parents.

“The pancreas is located deep in the abdomen, making it a highly uncommon organ to be injured,” he said. Its injury is associated with more serious accidents such as vehicle collision or long fall, he added.

“Such case of a ruptured pancreas seen in the toddler is very unlikely to be a result of an accidental injury.”

Findings from the autopsy also showed the toddler had sustained abdominal damage from a few days prior to her death.

“This means that they had already inflicted on the toddler similar kinds of abdominal injuries days before, and then again the day she died,” he said. “So the mother’s claims of having dropped her by accident hold little credibility.”

The circumstances may well constitute charges of murder, or at least manslaughter, rather than the lesser charge of child abuse leading to death, he said.

He submitted a 74-page written statement outlining the possibility of murder or manslaughter based on medical evidence to the Seoul prosecution Tuesday.

In a statement Monday, the Korean Women Lawyers Association also proposed the case be reviewed as a potential murder.

The toddler died about eight months after she was adopted in February. Her name was Jeong-in, which is the name given to her by her birth mother.

When she was brought to an emergency room at a western Seoul hospital on Oct. 13, she was already in a state of cardiac arrest. She was badly bruised, with her ribs fractured and stomach bloated from internal bleeding, according to the hospital records. Her death certificate read abdominal trauma.

In following investigations, the prosecutors indicted the adoptive mother on charges of child abuse homicide, and her adoptive father for child neglect.

Lim lamented the lack of police action despite three separate reports of child abuse filed by a day care center as well as a pediatrician who examined her. Her teacher had brought her to the pediatrician’s office after noticing bruises and weight loss. At the time police concluded there were no suspicions of abuse.

“If an experienced doctor who specializes in child health reports that abuse is suspected, it should not be overlooked. The police and child protection agency should look into the case and keep the child safe while the investigation is conducted,” he said.

He also called for better protection of pediatricians who are often first to report suspicions of child abuse to police.

“Doctors have received threats from parents or guardians after filing reports of suspected child abuse or neglect to the police. Their information must be protected so as not to discourage reporting,” he said.