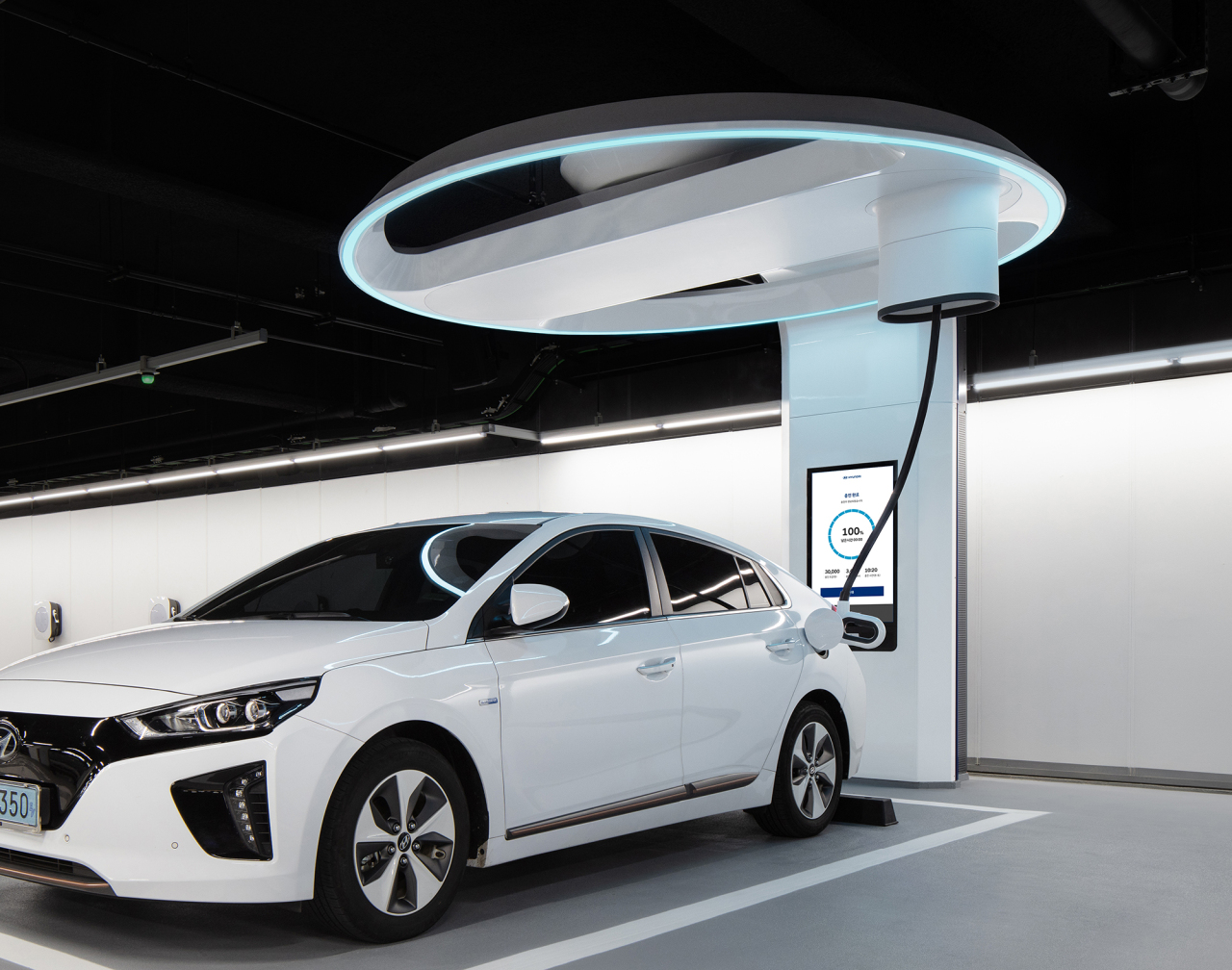 An electric vehicle is connected to Hi-Charger, an exclusive ultrahigh speed charger developed by Hyundai Motor. (Hyundai Motor)
For South Korea’s electric vehicle business, 2020 apparently served as a turning point with global players such as Tesla on the up and up and the ongoing COVID-19 pandemic raising the alarm about environmental pollution by internal combustion engines.

In the new year, this growing market is anticipated to take long strides on the back of prolonged government subsidies and carmakers’ paradigm shift towards ecofriendly vehicles.

The number of newly registered passenger EVs here came to 32,268 as of November, according to the Korea Automobile Manufacturers Association.

Also, the corresponding sector has expanded more than tenfold over the past five years, with accumulated sales surpassing the 140,000 mark last year. The figure first reached the 10,000 mark in 2016, data showed.

On the export front, EVs logged 112,254 units in accumulated figures as of end-November, up 67.2 percent from a year earlier. The latest results marked the first time that ecofriendly vehicles -- EVs, plug-in hybrid, and hydrogen fuel cell cars combined -- accounted for more than 10 percent of the nation’s total automobile sales.

Adding fuel to the market momentum is the government’s determination to lay out a new economic blueprint for the coronavirus-hit economy -- the so-called Korean New Deal that pivots on digital innovation and ecofriendly growth.

Suggesting the 2021 economic policy direction recently, Seoul vowed to supply an additional 100,000 electric cars in the new year, starting with increasing the number of charging stations from the current 33,000 to 36,000 within the year, and to 45,000 by 2025.

Separately, the Environment Ministry has outlined the EV subsidy program for this year, saying that it will continue to provide the allowance for car priced below 60 million won ($55,147), while halving the amount for those priced 60 million won or more. Luxury models that are priced at 90 million won or more will likely be exempted from the fiscal support.

The graded method largely takes after a subsidy system in Europe and China, which offers more benefits to budget cars in order to expand and diversify the market.

The given policies yet remain tentative and are expected to take shape as early as this month, after authorities contemplate market feedback.

Riding on the booming market and the government’s preferential subsidy for budget EVs, the nation’s largest automaker Hyundai Motor is set to roll out the Ioniq 5, its crossover utility vehicle that adopts an EV-exclusive platform E-GMP. As the expected market price comes to 50 million won, the model is likely to appeal to potential purchasers.

Hyundai Motor Group’s prestige brand Genesis, on the other hand, may take some impact from the subsidy restriction as its first purely electric car -- tentatively named JW -- will be priced between 60 million won and 90 million won.

“There is the possibility that high-end brands such as Tesla may adjust the market price of its upcoming models by lowering the battery prices,” said Lee Hang-goo, a senior researcher at Korea Automotive Technology Institute.

But in the case of luxury cars, the impact of the state subsidy will remain limited, as such models tend to be purchased as company cars.