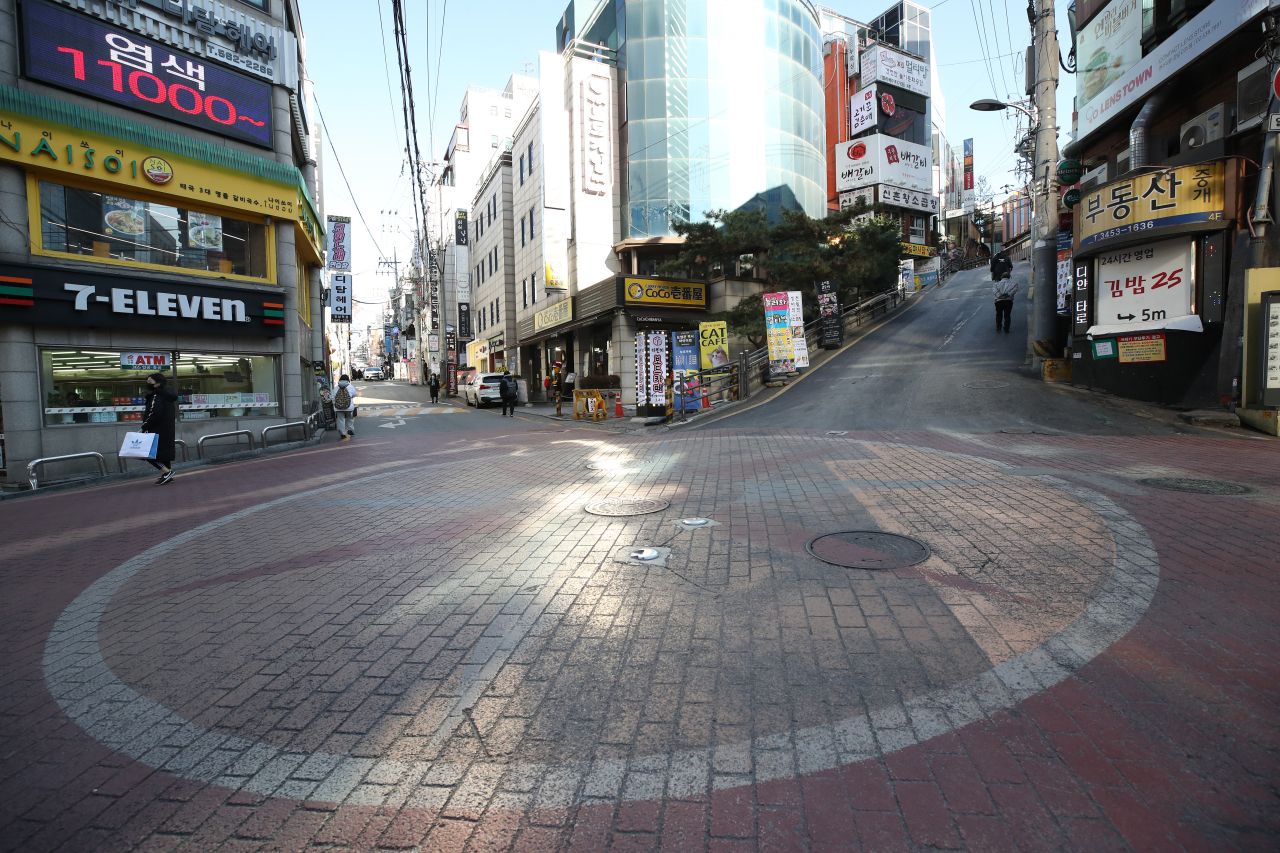 A view of empty streets in the Gangnam district, Seoul, Dec 14, 2020. (Yonhap)
Jung, the owner of a restaurant in southern Seoul’s bustling Gangnam district, increasingly finds himself in what he calls his “worst nightmare,” as he struggles to keep his shop afloat amid the ban on gatherings of five or more people at public facilities like his.

“It just pains me. Day by day, I see more and more empty seats. I’ve always been a guy that sees the glass half full rather than half empty. I’m really close to a change.”

Jung is one of the nation’s 5.8 million “micro firm” owners with fewer than 10 employees. They make up almost 4 out of 10 local businesses here and have been hit hardest by the COVID-19 pandemic and the government’s heightened social distancing measures.

Early this week, the government announced a new 9.3 trillion won ($8.2 billion) relief package to protect micro businesses, but the amount, worth up to 3 million won per person, seems too small.

Countries around the world have rolled out similar relief measures for businesses. Only select sectors have made a recovery but the economy as a whole has a long way ahead to a full rebound in most countries. This conflict has been dubbed the “K-shaped recovery.”

As South Korea continues to fight its third-deadliest wave of the coronavirus pandemic, the government also recently acknowledged the Korean economy was heading toward a K-shaped recovery, vowing to focus more on aiding have-nots such as micro firms and blue-collar workers.

“I call it the K-shaped recovery because for some there’s been a sharp rebound and for others it’s been a continuing decline,” said Peter Atwater, an adjunct economics professor at the College of William & Mary in Virginia, who has popularized the term. 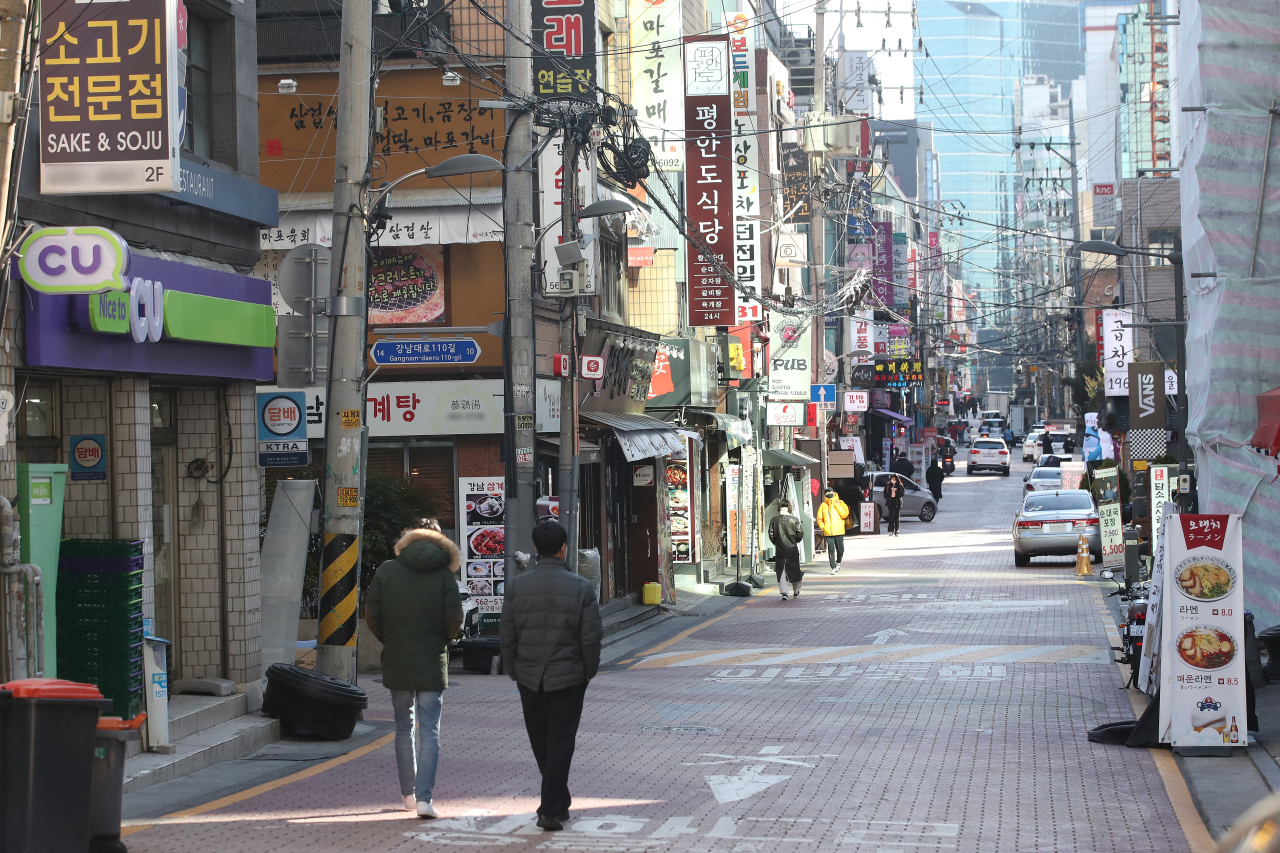 A view of empty streets in the Gangnam district, Seoul, Dec 14, 2020. (Yonhap)
“Those with wealth and the ability to work from home feel powerful, whereas others in the travel and entertainment industries feel powerless over job losses,” he said.

“Mounting hopelessness will fuel social unrest as those at the bottom demand change.”

The scholar predicted the K-shaped recovery will persist in 2021 -- even after the global vaccine distribution -- and galvanize society, urging governments to come up with a more strategic approach.

“I believe that unemployment assistance paired with government sponsored re-training opportunities should be considered not just by South Korea, but global governments more broadly,” he said.

According to Kim, workers at micro firms should be able to shift to another business if they find themselves no longer profitable. The government can provide expertise and loans for money that they lack through a standing program, Kim said, adding the workers would have to repay their loans.

Currently, Korea has no such programs to aid workers crossing into other sectors.

Sohn said that injecting cash could work in the short-term but in the long run Seoul should find a new source of economic growth such as the digital economy and green initiatives it has recently unveiled.

Kim Sung-hee, a professor of labor studies at Korea University, said the government should meanwhile expand the safety net for micro firms.

“They need better protection, so when they fall, they can quickly get back on their feet,” Kim said, that adding a better safety net stimulates the economy because people consume more.

A majority of micro firms here, choosing not to join the state employment insurance, say it does not give them benefits when needed. The government, aware of the complaints, is eyeing a system overhaul.

Kim noted higher taxes on the wealthy could help piece together a more befitting net for micro firms. But he added the country should first see to a more transparent regulatory practice on capital gains and properties taxes.

“Will the wealthy just stand down? Stiff resistance and tax evasion could be another road blocks,” he added.