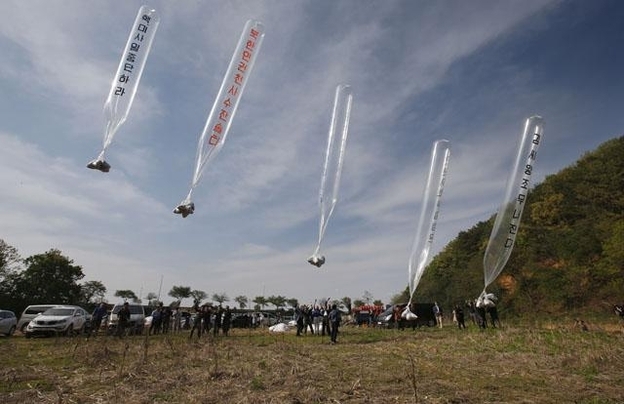 [1] A human rights group condemned the South Korean parliament’s push to penalize the launching of propaganda leaflets into North Korea as a violation of the freedom of expression, calling on the National Assembly to reject the proposed legislature.

[2] Human Rights Watch, a New York-based organization, said in a statement Saturday that if the bill that bans leafleting campaigns is enacted, it would violate South Koreans’ rights to the freedom of expression, making “engaging in humanitarianism and human rights activism a criminal offense.”

[3] Last week, the parliament’s foreign affairs committee passed an amendment for the Development of Inter-Korean Relations Act that seeks to impose punishments of up to three years in jail or fines of up to 30 million won ($27,700) on those distributing propaganda leaflets and other materials, as well as “money or other monetary benefits,” across the military demarcation line. The revision, introduced by the ruling Democratic Party of Korea lawmakers, is expected to easily pass the final vote session slated for Wednesday, as the ruling party controls the 300-seat parliament.

[4] HRW raised concern that the bill’s “overbroad language” could hamper humanitarian efforts in the North, as it could be interpreted as banning any items of value, which could also include food or medicine.

2. Why Korea needs a bank for modern-day Jean Valjeans

[1] Welcome to our bank that’s always running out of money!” said Hong Se-hwa. Despite its precarious situation, the 74-year-old head of Jean Valjean Bank seemed cheerful. Hong, who runs the bank as a microcredit program for people in need, greeted visitors with a humble smile, documents held tightly in one arm and a large coffee mug in his other hand.

[3] Hong aims to change the nation’s system so that fines are commensurate with an offender’s income, rather than based on an absolute amount of money for a particular crime. He believes that traditional fines imposed without regard to income are bound to make breadwinners suffer, with no second chance to overcome past mistakes.

[4] Six years have passed, and close to 900 people have been released from prison thanks to the bank’s loans. The special bank’s financial status is far from solid. It stays open thanks to generous citizens who care about its mission and are willing to open up their wallets.

[5] “The poor are inevitably tempted by some small amounts of money,” said Hong. “But we want to share the voice to those who have been neglected and abandoned by society for making small mistakes in life, to thousands of Jean Valjeans living in Korea today, that there is still some warmth left in society.”