Magician Ed Kwon poses before an interview with The Korea Herald in November. (Park Hyun-koo/The Korea Herald)
If you see a young man in black walking along the walls of Gyeongbokgung, cloaked in the darkness of the witching hours as he is wont to do most days, you may have just run into Kwon Joon-hyuk, better known as magician Ed Kwon.

Just a semester short of graduating from university in Las Vegas, where he majors in hospitality management, Kwon has been in South Korea since June, waiting to serve his mandatory military service. Walking in the middle of the night became a way to clear his mind at a time when his life seemed to be in limbo. A few days ago, he sent a message to say he had finally received notice from the military and would be off to boot camp in a couple of weeks.

The 24-year-old magician had an early interest in magic. While he developed a serious love for magic when he was 6 or 7, his friend from kindergarten reminded him how he had done a magic presentation back then.

“Magic became something different every year,” he said during an interview with The Korea Herald in November. “It fulfills different needs for me.”

As a youngster, he believed magic would open the door to mysteries -- the unknown. Perhaps it made him grow up faster. I remember being struck by his precociousness, watching him, then a teenager, performing with complete command of the small group of adults watching his every move. “People were paying attention to me and magic gave me a sense of self, identity.”

In school, his studies have included theater, philosophy, literature and history, moving from one field of study to the next. “My goal was never to have certification,” said Kwon about his seemingly meandering interests. 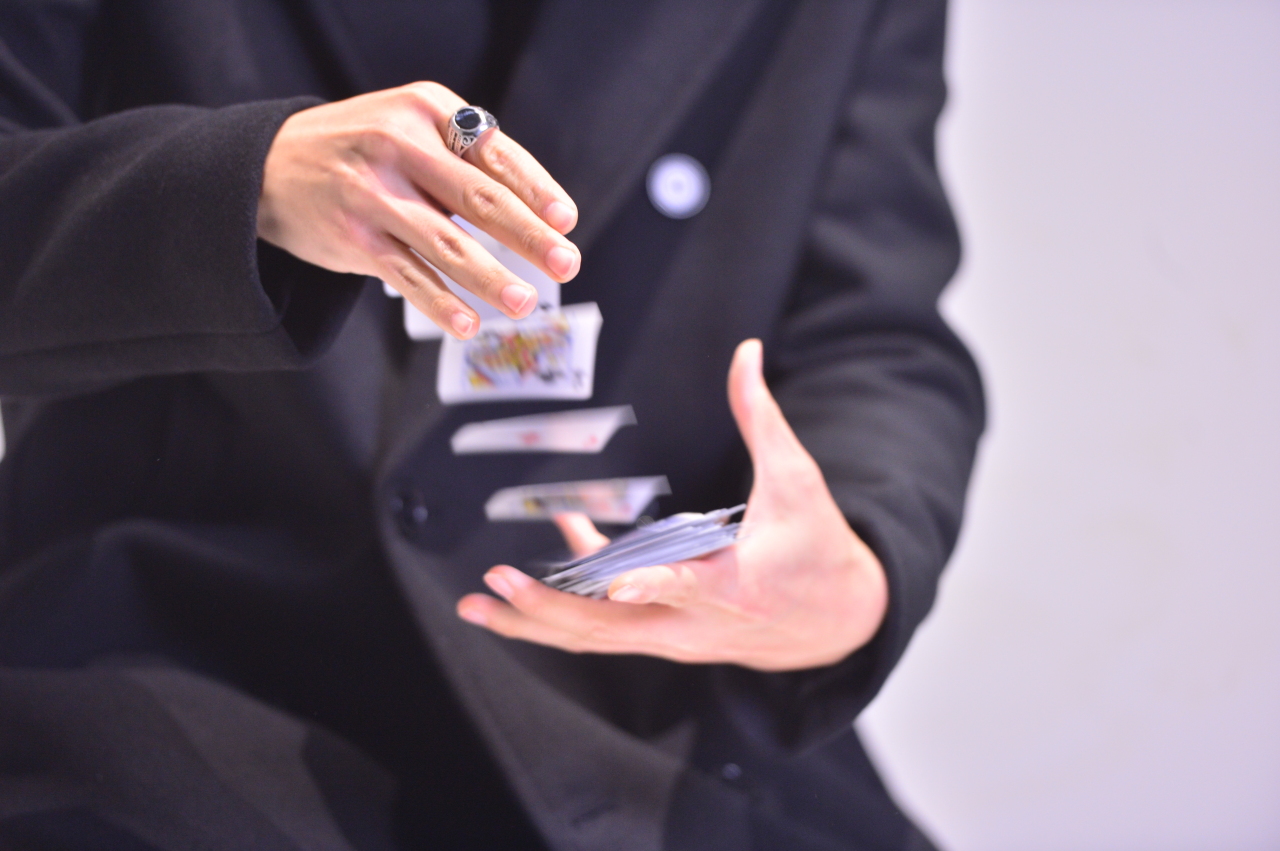 Magician Ed Kwon poses before an interview with The Korea Herald in November. (Park Hyun-koo/The Korea Herald)
Magicians are variously called wizards and conjurers as well. “‘Wizard’ is a combination of art and wiz, wiz meaning wise. Wizard is a wise man,” Kwon explained. “The word ‘magician’ derives from the word magi, meaning knowledgeable man,” he said. “I see myself as a conjurer.” As Kwon defines it, a conjurer creates an impression of the supernatural to entertain.

Kwon noted that alchemists, who would today be called doctors, scientists who make medicine and even chefs, fueled the development of chemistry and increased life expectancy in their pursuit of the ability to turn lead to gold and in their quest for immortality.

Magic involves both art and science, according to Kwon, who points to the need to balance the two. “Art is the message I want to convey and craft is the technical aspect of magic,” Kwon said.

And what is his message?

“Love and peace is my message,” he said. It seems like a simple concept, but it is the simple things that are the most complex, he explained. Referring to the pandemic times, he said we live in strange times. “We don’t fully know how to process these emotions,” he said. This leads to hatred, which leads to anger, which then leads to conflict, he observed.

Don’t expect flashy theatrics from Kwon. He is far removed from the popular image of a magician with hyperbolic rhetoric and exaggerated movements. Parsing words, Kwon exhibits a certain fastidiousness about how words are employed. His movements are deliberate, precisely tuned for the desired effect. And his cool, piercing eyes command you. This I know from having seen him perform a number of times. He did not perform any magic as part of this interview.

“I don’t shy from confusing, perplexing people,” he said. In fact, that is the kind of response he wants.

There are three “stages” of magic, according to Kwon: the manipulation of physical objects involving sleight of hand and the use of mechanical apparatuses, such as in “sawing off” limbs; the manipulation of human behavior, or psychological magic; and the metaphysical.

Everyone is born with the ability to do magic, but they forget or are unaware, according to Kwon. “A magician is someone who is aware enough to know they are working magic,” he said.

Perhaps more to the point, we are all spell casters, according to Kwon. “We use language to influence another human being, affect behavior, etc. That is magic,” he said. But he cautions that words can be used in very toxic ways.

Kwon is enthusiastic in proselytizing about magic. “Everyone should study magic. If they understood how spells work, they could be a little more free,” he said. He believes that magic is the “mother of all freedom and truth.”

Although magicians are often viewed as tricksters, as people who “cheat,” Kwon begs to differ. “Magician is an honest profession,” he said.

While he describes himself as the last of the classically trained conjurers -- conjuring goes back 2,000 years, according to Kwon -- he no longer practices theatrical conjuring. “I still make appearances but I no longer feel comfortable putting myself in that situation. The theater is a very unnatural environment. The limitation is that there is always the idea that this is entertainment, that the magician is trying to fool us.

“I don’t believe it is my strongest suit. I’d rather have casual conversation with a smaller group, use magic as metaphor and tool to initiate a philosophical thought,” he said, clearly articulating his goal. “My magic is simplistic, minimalist in approach.”

Today, Kwon does very few public shows in Las Vegas. In Korea, he performs exclusively at private gatherings of no more than 20-30 people. “I like to remain obscure. I see myself as a ghost,” he said.

“I spend 90 percent of my time investing in things that will never see the light of day,” said Kwon. He practices in his room at night, describing the process as soothing and meditative. “An act of creating an illusion is an act of disappearing,” he said. “I learn to disappear.”

With conjuring, he said, “The more I rehearse, the less people will know. People won’t even know what they are seeing.”

He likened the process to making a sculpture. “Take away the superfluous part and you are left with the essence,” he said.

“I am more of a curator in magic,” said Kwon, who studied five languages to be able to read ancient texts, including a 1584 text in archaic English that he deciphered. He recently completed translating a book from the early 1900s that deals with artistic principles and philosophy into Korean together with well-known Korean magician Choi Hyun-woo.

After a simple lunch of fried rice with garlic, Kwon asked me for some coins from my wallet and proceeded to perform at the white cloth-covered table. I had a coin “transported” from my tightly closed right fist to his and the one he held ended up in my closed fist. I watched with eyes wide open as a coin disappeared from his hand, only to be plucked off the wall and then found on his pocketless turtleneck top. I had him pick out precisely the card I had in mind. At one point, it felt like I was the magician performing the trick.

The whole experience left my heart beating so fast it was a while before I was comfortable. The reason for the racing heart? Perhaps I thought I was seeing something that could not be explained with my limited logic. Perhaps I thought I stood at the threshold between the real and the unknown. Whatever the reason, I felt great excitement and discomfort all at the same time.

I then understood clearly what Kwon had said earlier. “We don’t like the feeling that we don’t know,” he had said.