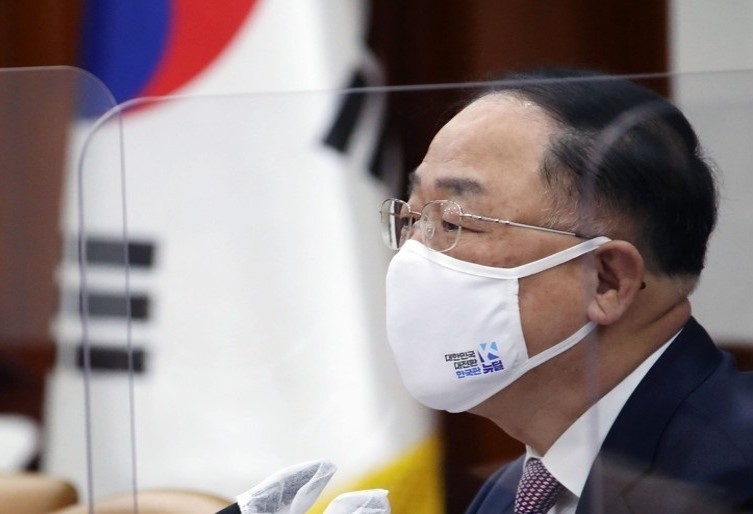 Presiding over a meeting with ministers for economic affairs in Seoul, Hong discussed strategies to nurture the so-called “big three” sectors and lead the global digitalization, among others.

“The government and private sector should join forces to revitalize the coronavirus-hit economy, and in addition, to have new economic engines and make a leap forward next year,” Deputy Prime Minister Hong said.

“As the government has tried to nurture sectors for industrial materials, parts and equipment since last year, it will similarly make efforts to advance the big three sectors -- system chips, next-generation vehicles, and biotechnology -- by coming up with a wide range of supportive measures,” he added.

In line with the move, the government will form a task force, consisting of government officials and industry experts, to deal with the matter, and hold meetings on a regular basis.

Hong said that the government will help the local system chip industry achieve 18 percent of the global market share by 2022 and 25 percent by 2025 while supporting the chip design industry -- known as fabless chipmakers -- to secure a market share of 5 percent by 2025. Fabless chipmaking involves designing and sell chips while outsourcing the actual manufacture to other companies.

A total of 380,000 electric and hydrogen vehicles will be up and running by 2022 while the figure will increase to 1.3 million by 2025, according to the government.

“The export volume of biotechnology products will grow to $20 billion in value by 2022, and reach $30 billion by 2025,” the deputy prime minister said.

He also emphasized the importance of investment in developing environmentally friendly materials, such as biodegradable plastics, as part of its drives to reduce carbon dioxide emissions and join the global trend to protect the environment.

While offering a fund of 3 billion won ($2.7 million) for small- and medium-sized companies that develop environmentally friendly materials for three years, the government will establish a center for authenticating eco-friendly materials in Ulsan and an organization that helps commercialize green materials in North Chungcheong Province.

Meanwhile, the National Assembly on Wednesday passed a 558 trillion-won budget for 2021, which include relief funds to help merchants and small business owners hit hard by the ongoing coronavirus crisis.