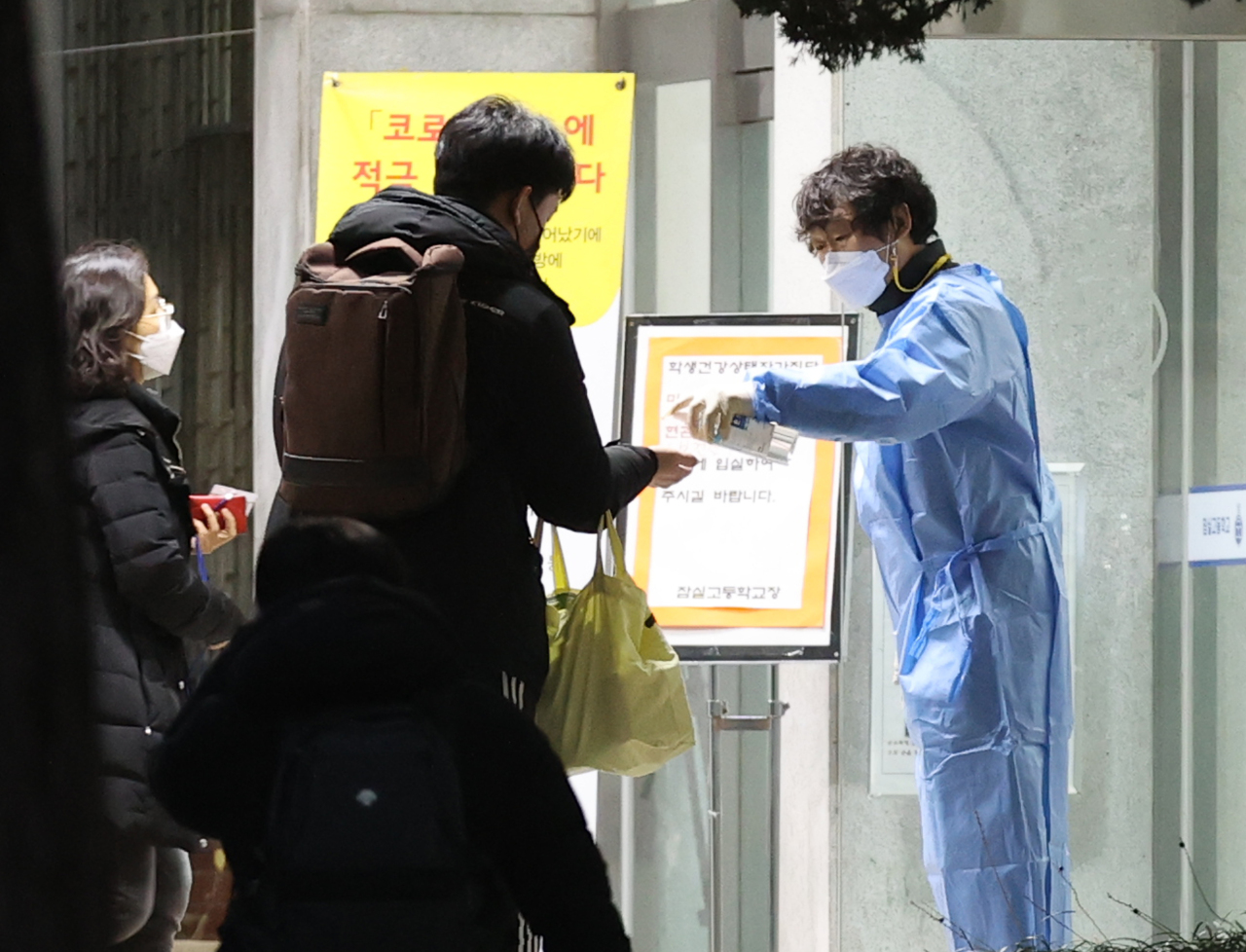 An official gives hand sanitizer to test takers at a high school located in southeastern Seoul ahead of the College Scholastic Ability Test (CSAT) on Thursday. (Yonhap)


South Korea's new coronavirus cases stayed above 500 for the second consecutive day Thursday as locally transmitted cases continued to pile up across the country, further raising concerns over a bigger wave of the pandemic in the winter season.

The country added 540 more COVID-19 cases, including 516 local infections, raising the total caseload to 35,703, according to the Korea Disease Control and Prevention Agency (KDCA). The capital city of Seoul accounted for 260 of the total.

The daily caseload marks the highest since the 569 reported last Friday.

South Korea reported more than 500 daily new infections for three consecutive days through Saturday last week, before falling back to 450 cases on Sunday due to less testing over the weekend.

Health authorities believe that this week will serve as a critical juncture for the nation's anti-virus fight. Should the virus curve not flatten, the country may have to further raise the level of its social distancing scheme.

South Korea adopted the Level 2 social distancing scheme in the greater Seoul area on Nov. 24 amid concerns over the growing number of patients in the region that houses around half of the nation's population.

The country operates a five-tier social distancing system. Under the second level, nightclubs and other high-risk entertainment facilities must suspend their business, while wedding and funeral halls should restrict visitor numbers to a maximum of 100.

Cafes should offer only takeout and delivery services, and restaurants are banned from serving food after 9 p.m.

With no signs of a letup, however, the country decided to add more restrictions to Level 2 starting this month, which banned the operation of sauna and indoor sports facilities. Hotels are also restricted from holding year-end parties.

South Korea can adopt Level 2.5 when the daily average number of cases hovers between 400 and 500 for a week.

The country already meets the threshold as daily new virus cases topped 450 in the past week.

Areas other than greater Seoul are currently under relatively moderate Level 1.5, although individual cities can adopt tougher measures depending on their situations. Gwangju, located 330 kilometers south of Seoul, has adopted Level 2, along with Chuncheon of Gangwon Province.

"With no clear signs of a slowdown in the number of new patients, the enhanced measure in the greater Seoul area is likely to be extended into next week as well," Sohn Young-rae, a senior health official said. The scheme was originally planned to run through Monday.

"We also need to wait until the weekend to assess the impact of the Level 2 social distancing scheme," he added.

Along with 260 cases reported from Seoul, 137 cases were from Gyeonggi Province that surrounds the capital. Incheon, located west of Seoul, added 22 more infections.

The number of newly confirmed cases in the greater Seoul came to a record high of 679, compared with a total of 608 cases reported on Nov. 26.

As of noon Thursday, a hospital from northeastern Seoul reported 21 additional patients, raising the tally to 22.

A school band from a university in northern Seoul also saw 17 more COVID-19 cases, with the total reaching 18.

A music class from the southern port city of Busan led to six more cases, raising the total to 164.

Over the past two weeks, 38 percent of newly added cases came from Seoul, followed by Gyeonggi Province with 23.9 percent and Incheon with 5.6 percent.

Cluster infections accounted for 38.5 percent, while 15.8 percent had unknown transmission routes, according to the KDCA.

Authorities said it was also notable that the number of patients in their 20s and 30s has been rising gradually.

The age group, which accounted for 22.3 percent of the new infections in October, took up 32.3 percent over the first three days of December.

Of the imported cases, the United States accounted for nine, followed by Russia with five and Italy with two.

The number of seriously or critically ill COVID-19 patients came to 117, up 16 from the previous day.

The fatality rate came to 1.48 percent.

The number of people released from quarantine after making full recoveries stood at 28,352, up 287 from a day earlier. This translates into around 79 percent of the virus patients here being cured.

The country, meanwhile, has signed a deal with British-Swedish bio giant AstraZeneca Plc. to purchase the company's COVID-19 vaccine, without providing further details.

Health authorities added global vaccine suppliers are requesting all buyers to exempt themselves from liability concerning potential side effects.

"We have not yet set the order when it comes to application of the vaccine," Lee said. "But it is a global norm to give priority to medical workers and those vulnerable to the disease."(Yonhap)